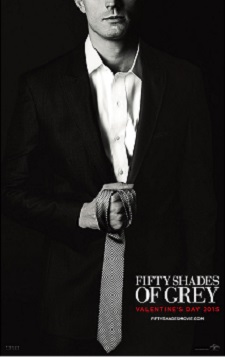 There are so many conversations we could potentially have about Fifty Shades of Grey, the film adaptation of EL James’s wildly popular romance novel. We could talk about its roots as Twilight fanfiction and whether or not publishing a derivative work that originates as a free piece of fan service is right or not (it isn’t, but so far I’ve only seen it happen in genres where demand outweighs supply, like romance and young adult, so I understand why it happens—publishers are desperate for material for enormous markets). Or we could talk about the extremely fucked up sexual politics at the center of the story, except other people are already on that. Or we could talk about the hopelessness of adapting garbage source material, except I don’t believe in that. Every movie, regardless of its source, has the potential to be good. What’s more, we should want them all to be good. Rooting against a movie being good is insane—why bother liking movies at all? So let’s just talk about Fifty Shades of Grey for what it is—a mediocre movie.

It’s not that bad. At times, it drifts into serious second-hand embarrassment territory, and it is not anything I’d defend as high art or even particularly interesting (if you want to see an interesting, thoughtful exploration of female sexuality and power dynamics, please see The Duke of Burgundy). But it isn’t terrible. I’ve seen way worse movies aimed at men and boys, so I think everyone can chill out about a mediocre movie aimed at women. Take away all the external issues referenced above, and what you’re left with is a middling movie about a young woman’s sexual awakening whose biggest problem is bad dialogue and a sometimes-lacking male lead. Jamie Dornan (The Fall) stars as Christian Grey, the debonair billionaire with a BDSM kink, and while he’s handsome enough to carry off the suits and glamour of Grey’s world, his performance is too stiff and lacks the confidence necessary to believe he’s an irresistible sex god.

There are moments when Dornan manages authenticity, particularly when he finds out that the object of his taboo affections, Anastasia Steele, is a virgin and he is horrified that he just showed her his BDSM playroom, incorrectly assuming she had a foundation from which to understand his fetish. But at almost every other moment, Dornan physically struggles with his Irish accent—seriously filmmakers, just let the accent thing go unless it’s absolutely necessary to cover it. The narrative even establishes that Grey is adopted, so having an Irish accent would be perfectly acceptable—he does not HAVE to sound like the rest of his family. But the accent is only part of Dornan’s problem: He’s clearly not comfortable with the material. To make something like Fifty Shades work—a Cinderella fantasy dressed up in fetish gear—you have to COMMIT to the premise. Dornan fails to commit. 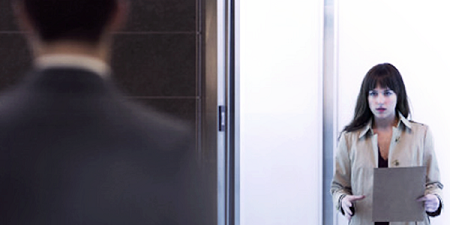 His female co-star, however, does not. Dakota Johnson was wonderful on the short-lived sitcom Ben and Kate, and the sparkle and wit that made her a delight on that show is in full evidence here. She manages to turn a basic Mary Sue into an actual person, and better, Johnson endows Anastasia with more agency and self-awareness than she has in the source material. There is still a problematic element to Anastasia and Grey’s relationship—his “high-handedness” is outright stalker behavior—but Johnson puts enough, well, steel into Anastasia to sell her willingness to explore Grey’s world, as well as her disastrous exit from it. It’s depressing that we have to ask that the female lead in a movie about female sexuality not be a victimized doormat, but it does feel like a small victory that Anastasia doesn’t come off as a victimized doormat.

Director Sam Taylor-Johnson (Nowhere Boy) and screenwriter Kelly Marcel (Saving Mr. Banks) deserve a lot of credit for making Fifty Shades work at all. Taylor-Johnson doesn’t do anthing revolutionary, but her direction is more than serviceable. The only thing that falls short of acceptable is the lighting, which is flat and boring. Taking the “grey” theme too far, the cold lighting leaches all depth from the scenery, giving the movie a cheap TV look despite its real estate porny settings and high-end product placement. The only scene with any visual dynamism is the conference room scene in which Anastasia and Grey negotiate her submissive contract—thanks to a deep red lighting scheme—and Johnson’s sly intonations—that scene pops with energy. Would that the rest of the movie had similar verve.