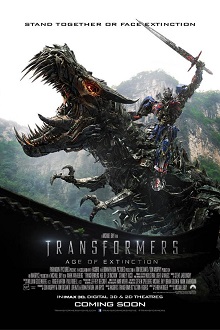 I don’t give up on filmmakers and I want every movie to be good, which is why I saw Transformers: Age of Extinction (aka Trans4mers). (The only other possible explanation is that I have lost my goddamned mind.) Michael Bay is, despite the overwhelming shittiness of his recent filmography, actually a talented director. He has a distinctive visual “voice”, he’s a true technician—he does his own camerawork, which few directors do anymore—and he cares about making movies that are fun. (Although there is a signature Michael Bay Up-Angle Shot that is so steep it looks like he actually laid the camera on the ground and filmed straight up his actor’s nose, a hilarious piece of camerawork.) Bay isn’t trying to be Orson Welles or make Citizen Kane, and there’s nothing wrong with that. He’s honest in his intentions, at least.

But the flipside of that coin is that Bay doesn’t care about story, and he’s not a good director of actors. When an actor turns in a good performance in a Bay movie, it’s in spite of Bay himself—Stanley Tucci is in Trans4mers and actually delivers a real performance with a character arc and everything, and it feels like he’s been spliced in from a different movie made on an entirely different planet. And the script is a fucking mess, and no, I don’t know why I was expecting anything different. I’ve been to Michael Bay sets. He never has a script, just an iPad with animatics showing what various action scenes will look like, and no one ever has a clue what’s going on.

Which is a big issue in Trans4mers. What is going on? What is happening? Why is anyone doing anything? Motivations are reduced to extreme basics such as, “Family Man is brave” and “Black Ops Guy is bad”. Titus Welliver’s character has something resembling motivation—his sister died in the attack on Chicago in Transformers 3, but by the end of the movie that is out the window he’s just another generic black hat. It’s a shame, too, because Welliver (Sons of Anarchy, The Good Wife, a bunch of stuff you’ve seen, he’s a classic That Guy) is a great actor who can make a meal out of crumbs—with even just a little leeway and some proper writing he could’ve turned CIA Guy into one of those tragic bad guys, doing bad things for good reasons.

Besides Tucci and Welliver, there’s nothing else resembling an actual performance in this movie. Mark Wahlberg is serviceable but bland as Cade Yeager (a name that can only exists in movies), and he spends most of the movie in Shrieking Boston Guy mode. Jack Reynor (Delivery Man) makes no impression as Generic Guy, and Nicola Peltz (The Last Airbender) is whatever as Lust Object. The only worthwhile thing any of these people do in the movie is have an unintentionally hilarious conversation about how Generic Guy and Lust Object’s relationship isn’t statutory rape because of Texas’s “Romeo & Juliet” laws. Generic Guy carries a little laminated card detailing the Romeo & Juliet law around in his pocket. For real.

Don’t ask me what this movie was about—something about Robot God and robot souls?—or what any of it meant. As with all previous Transformer movies, the Transformers do whatever the hell they want and the people are just in the way. But the people aren’t doing anything meaningful or interesting in the meantime, so the whole thing is just a loud, disconnected mess. It’s like watching someone with diarrhea shit for three hours, and when it’s over, you feel much the same way: Dirty, confused, and like you’ve just been tricked. Spare yourself this deafening turd of a movie and see Snowpiercer instead.