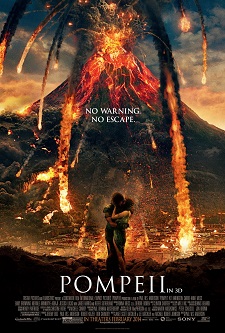 Yes, I sat through Pompeii. No, I didn’t expect much. Yes, I did think “at least the volcano will be cool”. No, I’m not impressed with Kit Harington’s acting. Yes, I am impressed with Kit Harington’s abs. No, I don’t know who is still trying to make Emily Browning a thing. Yes, director Paul W.S. Anderson is pretty much a professional shit factory at this point. No, I don’t know if Keifer Sutherland is broke, but it seems likely since he’s in this movie. Yes, Jared Harris will be in any terrible movie you pay him to be in. No, I was not entertained at any point during Pompeii. Yes, the movie blew mega-chunks.

The greatest crime Pompeii commits is making the eruption of Mount Vesuvius in 79 CE boring. It happened 2,000 years ago and is still one of the most destructive, devastating volcanic eruptions in recorded history, wiping out four towns (Pompeii, Herculaneum, Oplontis and Stabiae) and killing up to sixteen thousand people. Thanks to the petrified remains discovered in Pompeii we know that thousands of people died horrible deaths: Ash and volcanic debris clogged their harbor and best escape route, trapping citizens to die as thousands of pounds of ash rained down, causing buildings to collapse, burying people alive, or else they suffocated on clouds of toxic gas the volcano belted out by the kiloton.

Herculaneum tells an even more frightening story. There the citizens were vaporized by thermal shock, virtually the entire town gone in an instant as the concussive force of the eruption, followed by a wall of searing heat, incinerated people where they stood. Thermal shock superheats the body, curving the spine as muscles liquefy and bones fuse together. Many skulls were found shattered as the force of the shock caused heads to literally explode. On my list of Awful Ways To Die, thermal shock is number one. It’s fast but it’s excruciating. No thanks.

With such gory details known and with the benefit of science telling us exactly what happened to the people of Pompeii (and Herculaneum), I don’t understand why this movie was so boring. Maybe it was the generic love story—poor boy, rich girl, unwanted suitor driving them apart—but Titanic had a generic love story too (actually, the exact same generic love story), but when it came to the boat sinking, it was pretty awesome. Maybe it was the lack of interesting characters or the fact that neither Harington nor Browning are particularly compelling screen presences, or maybe it was the sum total of all those parts, but Pompeii was boring. 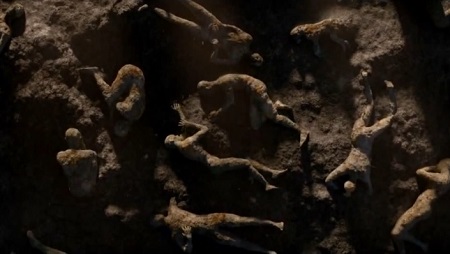 Worse, when Vesuvius does start erupting (halfway through the movie—takes too long to get there), it’s kept in the background. There are some shots of the volcano erupting, and more of flaming chunks of rock crashing down on the city, but a hellish pit of liquid earth-matter being launched miles into the sky, raining fire and death upon everyone is somehow not the entire focus of the movie.

To be fair, they do get many details of the eruption right. Thanks to Roman poet Pliny the Younger we have an extant eye-witness account of the eruption, and the petrified remains of Pompeii and Herculaneum have told us even more. Anderson is an uninspired director, but he put some time and effort into getting details right, like the earthquakes leading up to the eruption for days, the tsunami that struck the coast, and what a pyroclastic flow looks like as a wall of fire races toward you at nearly five hundred miles an hour.

But then there are the obnoxious misses, like people running barefoot over what had to be burning hot ash, or no one acting like the air being turned into a toxic stew was a problem. Anderson also condensed the events into one afternoon, when really, Vesuvius erupted continuously for two days, with six pyroclastic events occurring during that period. The first event was witnessed by Pliny; he described a relatively straight column of ash rising for miles into the sky (to this day, high-altitude volcanic eruptions, the most violent kind, are called Plinian eruptions). His observation was made a little past midday, and it’s assumed the actual eruption began sometime earlier in the morning hours.

But Pompeii wasn’t destroyed until the fourth and fifth pyroclastic events (Herculaneum was gone by the third), which occurred on the second day of the eruption. So you have twenty-four hours in which the citizens of Pompeii knew Vesuvius was erupting and did…what? THAT is the story I want to see. I don’t care about some trumped-up love story or gladiator twaddle. Just tell me about the people stuck in Pompeii. Or about the ones who left and came back when their city still stood after the first day. Or how about the people of Herculaneum, who probably thought they were lucky because the wind was pushing that terrifyingly huge ash column to the south, and they were on the north side of the volcano. 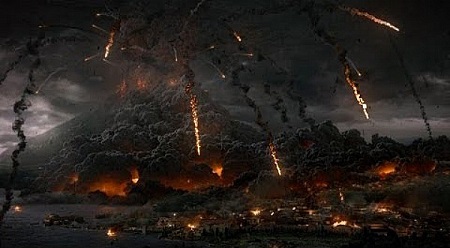 I’d so much rather see a movie called Vesuvius, directed by someone like Paul Greengrass, who wouldn’t bother building up characters we don’t care about, because when it comes to something like Mount Vesuvius, it’s the EVENT that matters more than anything. It’s unforgivable to render the 79 CE eruption boring, not when we have so many fascinating details about what exactly happened. The volcano should be the star, not Jon Snow’s abs.

PS: Geologic evidence shows that Vesuvius undergoes a Plinian eruption every 2,000 years. We’re living in the 100 year window of the next one, which is the fancy way of saying that it could happen at any time. Volcanoes!