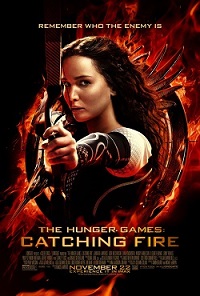 The Hunger Games wasn’t terrible. When I reviewed it last year, I liked it well enough, though I did note that 1) it was too long and/or poorly paced and 2) director Gary Ross was more of a hindrance than a help. Well, the sequel, Catching Fire, fixed both of those problems. Ross is out and though the movie still clocks in at two hours, twenty minutes-plus, the pacing is so much better that it isn’t a grind to sit through. Replacing Ross this time out is Francis Lawrence (Water for Elephants, I Am Legend), and screenwriters Simon Beaufoy (127 Hours, Slumdog Millionaire) and Michael Arndt (Toy Story 3). The original cast is all back, headed up by America’s pretend girlfriend, Jennifer Lawrence, along with a few new, and very welcome, additions.

Catching Fire picks up as Katniss (Lawrence) and Peeta (Josh Hutcherson) return to their homes in District 12, the impoverished, vaguely Appalachian section of Panem, a dystopic, possibly post-apocalyptic version of America. The movie, to its great credit, does not waste time with an opening prologue (the folks at Marvel could stand to learn this lesson, as this remains a weak spot for them), but instead jumps right in, getting into the thick of the political drama that now faces Katniss and Peeta. Winning isn’t enough—now they’re part of the Capitol’s elaborate publicity machine, not-so-gently shepherded along by officious Effie Trinket (Elizabeth Banks) and their consigliore, a former District 12 winner himself, the drunken Haymitch (Woody Harrelson). Effie and Haymitch both feel much more fleshed out this time around as the script is much better and they get to have real, emotional beats. Effie, particularly, is less of a caricature. 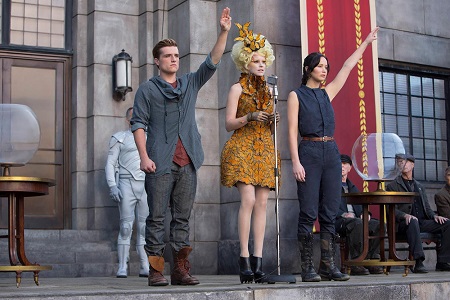 Everything about Catching Fire is a huge upgrade. The first movie didn’t look cheap, but it did look constrained. There was a flatness that came from trying to make the same section of whichever part of the American South where they filmed the movie (Georgia? North Carolina?) look like different locales, and the decadent Capitol was made of CGI. But this time out they nearly doubled the budget and were able to utilize multiple locations, so the whole look of the movie is much, much better. The Capitol is still a little squidgy around the edges, but it does look like more of a real place than it did before. And the actual Hunger Games arena is really impressive, with better effects and a more tangible presence than it had before. The arena takes on characteristics of its own and makes for some thrilling sequences. 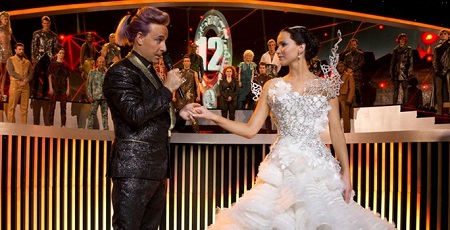 Another big up is the additional casting. Jena Malone and Sam Claflin (Snow White and the Huntsman) knock it out of the park as former winners Johanna Mason and Finnick Odair, and Phillip Seymour Hoffman as Gamesmaker Plutarch Heavensbee is spectacular. I haven’t read Catching Fire (I read The Hunger Games and didn’t love it, so I didn’t finish the series), so I didn’t know what Plutarch’s deal was and I audibly gasped during his reveal. The actual Hunger Games fell a little flat—this is a story about kids killing kids that doesn’t want to show kids killing kids—but the political aspects, the verbal and mental chess going on, made the movie for me. Katniss is largely reactive to the machinations surrounding her, but watching the adults try and predict what she will do, when she is quite unpredictable, was fun. 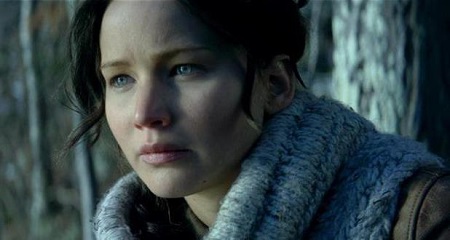 Not everything works, though. Francis Lawrence handled the material better than Ross—and eliminated the fucking shaky cam, thank God—and the script clicked along at a better pace, but nothing can save the lack of chemistry between Katniss, Peeta and Gale (Liam Hemsworth). It works a little bit for Peeta because his relationship with Katniss is somewhat ambiguous—played up for the cameras and she isn’t sure if either of them really is all that into the other—but Hemsworth is stiff and wooden and despite his hunky exterior, he generates zero on-screen heat. Big bro Chris isn’t a great actor, but he isn’t terrible and he is very watchable, with a natural and charismatic on-screen presence. Liam, however, might actually be a tree.

Catching Fire is a big improvement on The Hunger Games and left me more enthusiastic about the franchise than the first installment did. Jennifer Lawrence is superb as Katniss and she’s surrounded by a great ensemble—I found myself thinking that this is the American Harry Potter, in terms of the cast being a large collection of good-to-great American actors. It’s not groundbreaking in any way, but it’s an enjoyable and exciting movie, starring an immensely likeable actress. It’s hard not to like Jennifer Lawrence and it’s hard not to get a kick out of Catching Fire.