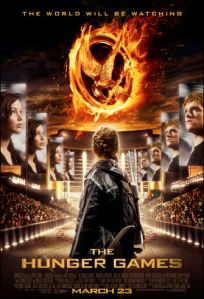 The Hunger Games opened to a box-office devouring $155 million, making it the third-highest three day weekend opening of all time (behind Harry Potter 7-2 and The Dark Knight). It kicked Hollywood in the teeth and showed that child murder can, in fact, entertain the masses. It’s made Liam Hemsworth a thing, brought back Wes Bentley, launched Jennifer Lawrence into the stratosphere, and right now scores of twelve-year-old girls are drawing their name and Josh Hutcherson’s linked by hearts. For a generation of kids, Donald Sutherland will be best known as creepy President Snow, Lenny Kravitz will be an actor-turned-musician (not the other way around), and everyone will believe that’s Woody Harrelson’s real hair.

In other words, The Hunger Games just became the biggest thing in pop culture. But how is the movie?

The movie is good. At times, it’s really good. At other times, it’s slightly less good. It’s too derivative to feel really special—the same issue that kept me from thinking the book 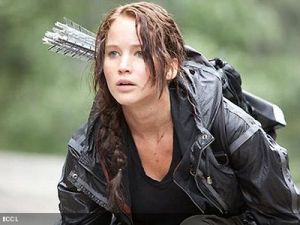 was all that and a bottle of Jack—but it approached some of the material boldly enough to at least feel like an interesting view of familiar ground. Let’s start with what worked the best, and that would be Katniss herself: Jennifer Lawrence (Winter’s Bone). Katniss is a mix of surly teen and mama bear; she’s a little introverted and is an out-and-out tomboy who hunts and traps and swears she’ll never have children. And once drafted into the Hunger Games, she kills people. In the wrong hands, Katniss could be a disaster and everyone would hate her. But under the care of Lawrence, who wears seriousness and sincerity like armor but who also taps into that deep well of mama bear blood, Katniss is a strong heroine. She’s not a preemptive thinker like Hermione Granger—most of Katniss’s actions are dictated by responses to the actions of others—but when forced into a situation in which she has to kill to survive, Katniss’s defensive strategies are what separate her from some of her bloodthirsty peers. Katniss understands what the potential cost of surviving the Hunger Games could be, but she’s prepared to bear that burden. She’s a pragmatist first and foremost and it’s a refreshing look for a teenaged heroine.

The casting in The Hunger Games is, for the most part, the greatest strength of the movie. Lawrence is spot-on, as is 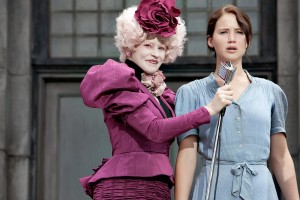 young’un Willow Shields as Katniss’s sister, Prim. Though we only get a handful of moments between Katniss and Prim, Shields and Lawrence establish their relationship well enough that it means something when Katniss says she’s trying to win for Prim. Liam Hemsworth looks effectively broody and rugged as Katniss’s best friend Gale, though he has little to accomplish here except establish that he like-likes Katniss. And the adults are beautifully cast across the board. Woody Harrelson delivers a savvier take on the drunk Haymitch, who is supposed to mentor Katniss and Peeta through the Games. I really liked the adjustment to Haymitch’s character, and getting to see him working the room on behalf of his tributes during the Games. Elizabeth Banks was delightful as the officious Effie Trinket—the expression on her face as she walked through District 12, as if she smelled something bad, cracked me up. And Lenny Kravitz is The Sex as Katniss’s stylist, Cinna. Oh, and Stanley Tucci! He was smarmily perfect as television host Caesar Flickerman.

Where the casting falls apart a little is with the kids. Of all the tributes, I thought only Amandla Stenberg (Colombiana) was well cast as Rue. Some of the problem is that we don’t get to know the other tributes—the players in the Hunger 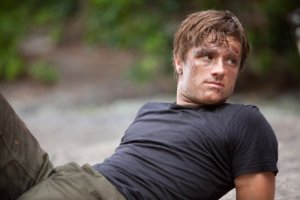 Games—as anything other than archetypes. These are the mean kids, these are the good kids, these are the cannon fodder. And some of it is that they are terrible actors—I’m looking at you, Alexander Ludwig (Race to Witch Mountain). Ludwig, the son of Lionsgate co-chairman Harald Ludwig, may have a beat-me face that suits Cato, a bully and “volunteer tribute” who has trained his whole life for the Hunger Games, but he can’t act at all so his big moment at the end falls spectacularly flat (pun fully intended). And then there is Josh Hutcherson, the polarizing Peeta. First and foremost, Hutcherson acquits himself well as an actor. The issues surrounding Peeta have nothing to do with Hutcherson’s skill and everything to do with how neutered the character is. Hutcherson ably shows Peeta’s people-pleasing personality, his ability to charm a crowd, his political savvy. But then the Games start the character is reduced to a burdensome damsel in distress. Once in the arena, we don’t really get a sense of Peeta’s motivations. He just becomes a lovesick idiot. It’s really too bad, because Hutcherson isn’t a bad actor. He definitely could have contributed more. And I’m not getting into how he looks or isn’t sexy enough—he’s there for the twelve year olds, and he’s a nice, safe target for their first crush.

Another of The Hunger Games big selling points is that they run right at the more brutal aspects of the story. Director

and co-writer Gary Ross (Seabiscuit, Pleasantville) does not hold his camera back from the violence inherent in the Hunger Games, a competition in which twenty-four children fight to the death. He might wave that camera around, and shake it up and down, but he isn’t squeamish about the reality of the story, which is kids killing kids. The scene at the opening of the Games is particularly awful, and the movie is better for it. This is a worst-case scenario for what could happen if our competition-driven society were to collapse and spiral out of control. And if you think the Hunger Games could never happen, think again. The audience I saw the movie with—easily fifty percent under 21—CHEERED when Cato bit it at the end. He’s an asshole, sure, but that is not the appropriate response. We were the Capitol!

But Ross is also a big problem for the film. His direction leaned toward the gimmicky, which detracted from all the right that was happening on screen. The use of shaky cam just pisses me off, and there was far too much of it to boot. But his biggest sin was in not

preventing this movie from being so goddamn long. It was fully half an hour too long. The biggest cut that could be made would be to lose the coda in District 12 and save Katniss and Peeta’s return for the second movie. After the triumphant moment when they win the Games and gamesmaker Seneca Crane is punished for it, everything else feels anti-climactic and extra. It ruined the urgency that had been driving the movie to that point, and ended it on a flat note. If it had been this long and well paced, no problem. But the sketchy rhythm points to not quite having enough solid material to support the two hour and twenty minute run time.

On the whole, though, The Hunger Games is a good movie, a solid introduction to the world of Panem and Katniss Everdeen. It definitely made me want to see more come next fall in Catching Fire. I just think they might want to consider bringing on a new director for #2. Or at the very least, commit to a shorter movie.