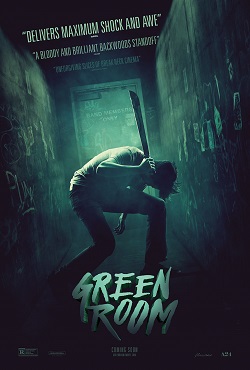 Filmmaker Jeremy Saulnier made a splash in 2013 with Blue Ruin, a funny-sad but brutal film in the revenge-thriller vein about a man seeking revenge who is wholly unequipped to seek revenge. Saulnier follows up Blue Ruin with Green Room—sensing a theme here—a film I was bitterly upset about missing at TIFF last fall. But Green Room is now in theaters, and I finally saw it, and holy shit, it made me sick to my stomach in the best possible way. Green Room ratchets up the tension and the horror over ninety minutes until the possibility of puking starts to feel like sweet relief.

Green Room stars Anton Yelchin (Only Lovers Left Alive, Star Trek) and Alia Shawkat (Arrested Development) as members of a punk band who get stranded in rural Anywhere, USA after a gig goes south. When their original gig doesn’t pan out, the Ain’t Rights accept a second gig at an out-of-the-way skinhead bar to make enough cash to get home. Without laying it on too thick Saulnier, who writes and directs, sets up this gig as potentially more dangerous than your average punk show, but the Ain’t Rights are in a hardcore scene, so they think they can handle the “boots and braces” crowd.

Spoiler alert: They can’t. It takes about twenty minutes for everything to go to shit, and then Green Room is an unrelenting downhill sprint to disaster as the band is forced to fight their way out of the green room at the back of the Neo-Nazi club. Patrick Stewart stars as Darcy, the head of the white power cult that has the band trapped, and he’s fucking scary, mostly because he never loses his cool. And that’s the genius of Green Room—the characters are constantly thinking and planning their next move. Their ideas may be bad and their hope foolish, but the band is constantly strategizing what to do next, and how to maximize their odds. 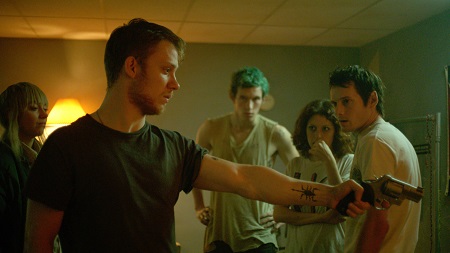 And on the other side, the skinheads are coolly brutal, with “red laces” willing and ready to die to protect the “movement”. Their brutality shows odd touches of humanity—the love a man has for his vicious attack dogs, the tangible brotherhood between the skinheads, one dude’s quiet desperation to find out what happened to his girlfriend. Green Room isn’t a character study and Saulnier is more interested in action and circumstance than character, but there are enough of these flourishes to give it an elevated thoughtfulness. Between this and Blue Ruin, Saulnier is positioning himself as a thinking person’s action director—plenty of style, but a lot of substance, too.

Macon Blair, who starred in Blue Ruin, pops up here as a kind of Neo-Nazi aide de camp, and even in a smaller role he is a magnetic presence on screen. The casting is generally solid across the board—Imogen Poots is OUTSTANDING—but there are some wonky accents that once again make the case that actors should be able to work in their native accents unless it’s absolutely necessary they adopt a different voice. It doesn’t feel necessary here, except for Patrick Stewart who has to be believable as someone backwoods skinheads would follow. Ironically, he struggles the most with his accent.

Green Room is not going to be for everyone. The violence is sudden, graphic, and horrifying—people die BADLY—and the film never lets the tension drop once it starts winding up. About halfway through I was white-knuckling it, absolutely riveted but also sickened by dread of what could possibly happen next. Like Blue Ruin, Green Room is destined for cult status amongst action/grindhouse fans, and for those willing to give it a shot it offers a rare experience, combining the kind of meticulous craftsmanship we expect from arthouse cinema with the hocking, terrifying violence we associate with exploitation films. Green Room is quite possibly one of my favorites for the year.