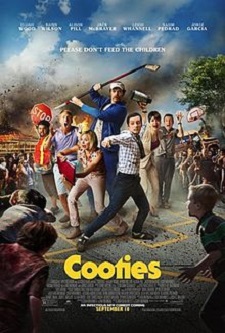 I have generally enjoyed Elijah Wood’s post-Lord of the Rings career as he’s largely retreated into genre and takes on interesting and offbeat projects like Wilfred and the Maniac remake—both of which are good, as is last year’s Grand Piano—but his latest movie, Cooties, of which he is both producer and star, is not up to his usual standard of oddball fare. (He also has movies with Vin Diesel AND Nicolas Cage coming up, which means that either he’s taking “ironic performance” to whole new levels or that LOTR money is running low.) Cooties is a zombie movie with the twist that it’s set at an elementary school and the kids are the only ones affected by a zombie virus outbreak, leaving their beleaguered teachers to fend them off or die trying.

Wood stars as Clint, a failed writer who takes a job teaching summer school at his alma mater in the town of “Fort Chicken, Illinois”. As a current resident of Illinois, I can tell you that chicken farming is not big here. I am not sure why this movie wasn’t set in, say, Arkansas, where factory chicken farming is actually a thing, especially since Rainn Wilson’s gym teacher, Wade, inexplicably has a Southern accent. Fort Chicken is pegged as being in the greater Chicago area—no one has a Southern accent up here, not even in the farming country fifty or sixty miles west of the city. So I had some problems with Cooties right away, not only because of the location bullshit but also because writers Leigh Whannell (veteran of the Saw and Insidious franchises) and Ian Brennan (a Ryan Murphy acolyte from Glee and Scream Queens) don’t seem to know if they’re making fun of the Midwest or the South.

This is actually the central problem with Cooties—inconsistency. The setup, except for the Illinois/chicken bullshit, is pretty solid. Clint goes to the first day of summer school, reconnects with his schoolboy crush object, Lucy (an all-in performance from Alison Pill), and develops an immediate dislike for Lucy’s boyfriend, Wade. The teachers are all oddballs, but they’re not especially well defined. Clint is the most clearly drawn, thanks in large part to Wood being good at playing losers and misfits. He nails the combination of Clint’s outward projection of his life in New York as a writer with the obvious signs of his failure, but no one else gets the same treatment from the writers or directors Jonathan Milott and Cary Murnion. 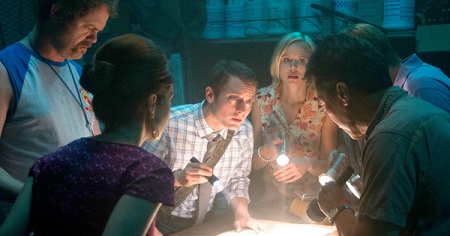 Lucy is ride-or-die chipper no matter how bad things get, which instead of being the result of some interesting personal circumstance is simply how she “dealt with the terrorists after 9/11”. There are a lot of weird 9/11 jokes in this movie, only one of which works—one of the schoolkids is named “Patriot” because he was born on 9/11, and he announces proudly, “God sent me on that day.” (Kudos to Cooper Roth for his sublimely obnoxious performance as Patriot.) And Wilson is totally stranded as Wade, a typical gym teacher/jock stereotype who only manages to make real hay with a short monologue about how he wanted to be a teacher and how teachers don’t get enough respect (true). Cooties hits far too few of these beats, where the humor or actual emotion is grounded in something real. 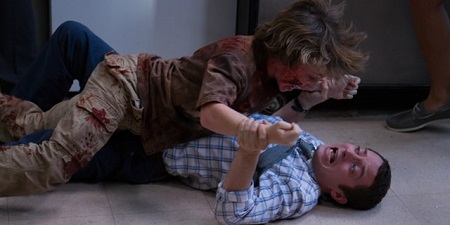 As a B-movie riff on zombie flicks, Cooties doesn’t have to deliver much more than good horror moments and some genuine comedy, but because the characters are so nebulous very little of the comedy actually works. Milott and Murnion are generally competent with the gore and horror scenes, but they can’t decide between wanting to indulge in over the top silly scenes, like zombie-kids jumping rope with intestines, and actual end-of-the-world horror. And the actors, because they don’t have anything in which to root their performances, swing between extremes, with some playing their characters straight, like Pill and Wood, and others going for broad comedy, like Nasim Pedrad as a stridently militant teacher. What exactly she’s militant about I’m still not sure, beyond “everything”. This is a script clearly written by guys with competing ideas of what this movie is about and first-time directors incapable of course-correcting and bringing the whole thing together in a coherent way. It’s too bad—Cooties has promise as a premise but the end result is just a mess.

Cooties is currently in limited release and available on demand.