In 2011 I loved The Trip, the largely improvisational road trip comedy starring Steve Coogan (Philomena) and Rob Brydon (a bunch of British TV stuff). So I was primed to love the sequel, The Trip to Italy, now in limited release and available on demand. But even with a positive bias, here’s how much I like Italy: Even though Comcast was being a total cunt that was determined to ruin my viewing experience with constant outages, I STILL enjoyed my viewing experience. It’s funny, light but thoughtful, and—surprisingly, for a sequel—fresh.

Michael Winterbottom returns as the director and Coogan and Brydon reprise their roles as heightened versions of themselves, alternating between scripted scenes and improvised riffs as they follow the trail of Byron and Shelley through Italy, eating sumptuous meals and picking on one another. As much as I loved The Trip, I actually laughed harder throughout Italy, and that’s largely because Coogan and Brydon seemed even more relaxed this time around, and Coogan in particular wasn’t primed and ready for bear. Where he spent the first movie decimating Brydon with withering set-downs—funny but sometimes hard to watch—this time he was a little gentler, more openly friendly toward his scene partner, and it made for some terrific material. 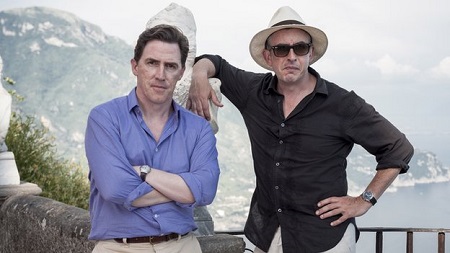 The first movie made famous Coogan and Brydon’s dueling Michael Caine impressions, but this time Coogan refuses to be drawn into another round, which leads to an hysterical imagined conversation about a studio lackey trying to deal with Christian Bale’s and Tom Hardy’s unintelligible Batman and Bane voices, respectively. Similarly, while Coogan eulogizing Brydon at Bolton Abbey was funny, Brydon delivering a posthumous acceptance speech on Coogan’s behalf after he’s murdered him is flat-out hilarious. There are also some really zingy one-liners, such as Coogan saying with perfectly careless deadpan, “I definitely did not tamper with the sound system to prevent you from playing music”, or saying to his pregnant assistant about her obvious weight gain, “I thought you were either pregnant or depressed.”

Comedy sequels are tough because people just want a rehash everything they loved about #1, but that’s never funny (see also: The Hangover Part II). If you’ve got a really good group of comedians, you can make a sequel that’s funny, but isn’t particularly surprising or even engaging like #1 (see also: Anchorman 2). But The Trip and The Trip to Italy are both very funny movies that work entirely on their own—you don’t need to see #1 to roll with #2. Perhaps it’s because these movies are actually cut down from a TV series (that airs on the BBC), so they’re conceived as parts of a larger, ongoing narrative, that helps them to function so well. 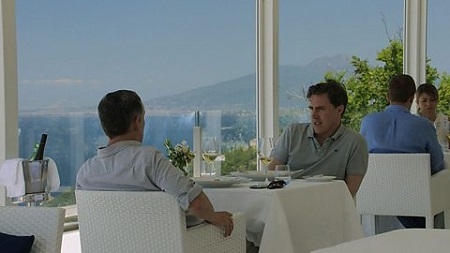 It also helps that this time the focus is more on Brydon than on Coogan, which probably also accounts for the gentler tone—Brydon comes across as the nicer guy. In the first Trip, Brydon was painted as the guy who worked enough to be successful but hadn’t tasted the elevated heights that Coogan, a performer with a hugely popular career back home and also a nominal one in America, had. But in this one we see Coogan returning to Britain after a couple years working in America just as Brydon lands a role in a Michael Mann movie—his potential breakout moment. And so it’s Brydon who is dealing with the drift of a performer’s life, away from the family and relatively normal life that anchored him so well before. The sad, lonely aspects of Brydon’s life at this juncture bring a touch of melancholy to balance the repartee with Coogan.

The Trip to Italy is also going to make you fucking HUNGRY. As in the first one, food is central to the narrative and glimpses of various Italian kitchens feature dishes that range from the artistic to the hearty, and all of it looks delicious. It’s also going to make you want to go to Italy, as returning DP James Clarke’s cinematography is gorgeous, making the most out of already spectacular settings. As a travelogue, this series/franchise succeeds very well. Perhaps the highest compliment I can pay The Trip to Italy is that it not only left me hungry for Italian food, but also to see the next installment. Here’s hoping there’s a #3.