Once upon a time, Guardians of the Galaxy was a big risk, a comic book property completely unheard of by general audiences—even more obscure than Iron Man was back in 2008—featuring a talking raccoon and a space ent as two of its main characters. However, director James Gunn (Super, Slither), who co-wrote the script along with Nicole Perlman, the first woman credited with writing a Marvel screenplay, proved the right kind of weird to ground the project. Guardians of the Galaxy is a splendid film—wonderful to look at, exciting to watch, in turns deeply funny and emotional. By some metrics, it’s the best Marvel movie yet; certainly it is the funniest and best-looking.

Gunn’s stamp is all over the movie, from the referential humor to the brief but high-impact action sequences, all balanced against genuine emotion to anchor the characters. It’s the same recipe you can find in his previous movies, and he and Perlman also wisely structured Guardians in a very conventional, action-movie way. If you’re studying good action movie scripts, Guardians is a prime example.

By serving up weird characters in a traditional way, it makes it easier for the audience to accept them. Rocket Raccoon (voiced by Bradley Cooper) slots neatly into the action movie “loose cannon”, and space ent Groot is his patient, long-suffering partner—they’re the Riggs & Murtaugh of Marvel. Peter Quill (Chris Pratt in a star-making turn), meanwhile, fits precisely into the Marvel Hero mold first established by Tony Stark—a wise-cracking, charismatic selfish asshole who wakes up to the world around him when confronted by a potentially devastating threat. Zoe Saldana and Dave Bautista round out the group as the standard female ass-kicker, Gamora, and the family man bent on revenge, Drax, respectively. 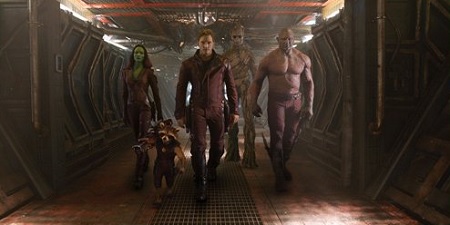 It’d be nice in the sequel—already slated for July 28, 2017—to see more from Gamora. Saldana brought a lot to her, but there wasn’t a lot of time to explore her most interesting facets. We’re told that Gamora has done a lot of terrible things on behalf of her adopted father, uber-villain Thanos (the one who prompted Loki to try and take over Earth in The Avengers), but we don’t see much of her inner conflict. Quill is our entrée into this world, and we’ll have to learn more about Gamora as more Guardians movies unfold, not unlike how Natasha Romanoff is being treated in the Earth-bound movies. Bautista, meanwhile, was used perfectly as a super-literal foil to Quill’s constant wise-cracking; I’m not sure I’d like him half so much if utilized as more than that.

But the real stars are Rocket and Groot. Bradley Cooper did a terrific job voicing Rocket and the CG-animation is spectacular—Rocket’s every whisker trembles as he speaks, saliva drips down his little teeth, his tail fluffs every time he gets mad. Groot is also a work of art, with strafed bark and big, watery eyes that actually emote. Vin Diesel also does a solid job repeating “I am Groot” in varying inflections, invoking meaning through tone and not words. The two best scenes in the movie belong to Rocket, though, first as he drunkenly, bitterly rages against the unjustness of a life thrust upon him—he’s the result of illegal experimentation—and then later as he cries over the loss of Groot and allows himself, perhaps for the first time, to be comforted.

And that’s the secret magic of Guardians of the Galaxy—the whole thing is about the power of friendship. The Guardians first team up out of expediency: Quill and Gamora both want the same glowing Macguffin (isn’t it always?), Rocket and Groot want to collect the bounty on Quill’s head, and Drax wants revenge against Gamora for his family’s death. But their selfish motivations give way to a common goal as they begin to understand just how dangerous the glowing Macguffin is—it’s one of the Infinity Stones, joining the Tesseract and the glowing Kool-Aid from Thor: The Dark World as “stuff that will matter in Avengers 3”—and they set out to stop Ronan the Accuser (Lee Pace) and Thanos from destroying a world.

In the end, it comes down to five unlikely friends, each outcasts in their own way, to work together to save the world. And it’s done in a completely sincere, non-cheeky way. For all that Guardians jokes about this, that, and the other, the friendships at the heart of the story are always taken seriously. These characters are each well-realized individuals who find common ground and form bonds organically, first from need, and then later from genuine liking. 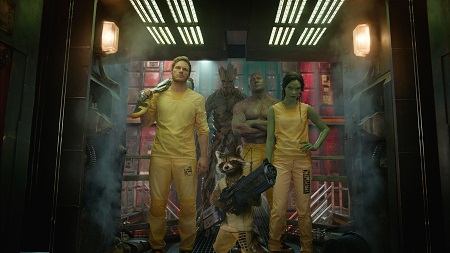 The grand finale for once is not a fight, though there is a dazzling aerial battle first, but a group of friends literally standing united against the big bad. It’s almost naïve it’s so sweet and simple, but because we’ve come to care about these characters and are invested in their relationship(s), it’s entirely effective. Guardians of the Galaxy leaves us with the most emotionally satisfying Marvel-movie ending since Tony Stark looked into the camera and declared, “I am Iron Man.” Except this time it’s not one man against the world, it’s five people adventuring together, powered by the magic of friendship.

6 thoughts on “Guardians of the Galaxy: Friendship is Magic”