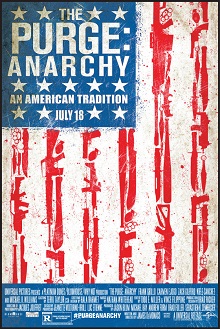 Last summer The Purge was a surprise sleeper hit. On a $3 million budget, it made over $89 million worldwide, so a sequel was immediately ordered. Now, just one year later, that sequel, The Purge: Anarchy, is in theaters, which is kind of impressive (super speedy turn around), but would be more so if the script wasn’t 87% people whisper-yelling “get down!”, “stay back!”, and “follow me!”. Still, The Purge: Anarchy is dumb B-movie fun, as long as it’s not getting up its own ass with socio-political commentary. Movies like this don’t need to be smart, they just need to be entertaining, and The Purge: Anarchy is, if nothing else, entertaining.

Writer/director James DeMonaco’s idea is interesting—in the near future, America has created an annual twelve-hour binge in which all crime is legal called the Purge. The first movie was, unfortunately, hindered by its very limited budget so it was really nothing more than a standard home invasion plot, which left viewers highly dissatisfied (it rated a C Cinemascore). The concept of the Purge didn’t really matter to the events in the movie. Take it away, and you still have the exact same home invasion, just without the background info that this probably happening all over the country at the same moment.

With a $28 million budget the second time around, DeMonaco was able to fix this and get out into the streets of Los Angeles, allowing us to see the Purge playing out across a city. We get to see rich people in semi-trucks with huge machine guns mowing down victims, roving street gangs hunting people, and rich people hunting people, and, most fascinating, an “anti-Purge” family breaking down when one bullied family member decides to exact revenge. There’s also a Black Panther-esque group (lead by the criminally underused Michael K. Williams) out to protect the poor and easily victimized as they are, statistically, the ones who suffer most in the Purge—the setup for The Purge #3 no doubt—and we get introduced to the concept of “martyrs”, people who accept large financial settlements for their families and in turn allow themselves to be murdered by rich people who don’t want to risk going outside.

The family breakdown is one of the best scenes in the movie. It’s concise and clearly mapped out—we know where everyone is thanks to good camera work—the characters are simple but well-drawn and their various wants in the scene are immediately understandable. The Purge: Anarchy is not a bad movie. At times, it displays a high level of genre-competence. The problems only really start when DeMonaco tries to inject Thoughts On Important Things through his narrative. The idea of a Purge lends itself to commentary on socio-economic injustice, but DeMonaco is not the right person to communicate those ideas. He’s great for making a solid B-grade thriller with some decently gory scenes—like the family scene—but, especially in the wake of the elegant Snowpiercer, his attempts at editorializing come across as ham-fisted.

They also missed the boat with the main character. Played by the tremendously charismatic Frank Grillo (Captain America: The Winter Soldier), the unnamed anti-hero at the center of the action is out to Purge. By coincidence he hooks up with a band of sure-to-be-killed non-Purgers in downtown LA, but even though he has promised to help them reach safety, the movie never lets us forget that he is out to kill. The problem is that the movie also makes it clear from the very beginning what his motivation is, and it’s not just “I want to kill people tonight”.

The movie would have been better if it let us think that Grillo’s character was actually just out to kill people. His revealing monologue when we learn his motivation is set up to be a Big Moment, but because it’s been telegraphed all along, it lands poorly, despite Grillo being a legit good actor who is almost preternaturally likeable. Compare it to Curtis’s big reveal in Snowpiercer and it’s even worse—both movies are going for reverse reveals, but Anarchy fails to provide the set up necessary to achieve maximum payoff.

Overall, though, Anarchy is a solid if uninspired thriller. It delivers on the premise of the Purge, and it benefits from Grillo, who can make anything engaging. And it’s definitely better than the first one, in both scope and execution, as reflected by its increased B+ Cinemascore. It’s junk food cinema for sure, but it’s satisfying all the same.