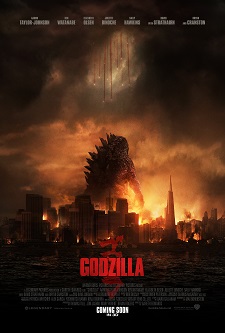 Last summer, Pacific Rim disappointed me. I wanted to love it, but it was so predictable I couldn’t get with it. Godzilla, on the other hand, turned out to be everything I wanted Pacific Rim to be: An awesome spectacle made up of giant monsters punching each other in the face, and a plot that holds together just well enough to not distract from all the monster face-punching. It was also fun and well-made and clever in spots and delightfully cheesy in others, and it had a STELLAR sense of pacing. By the climactic battle between Godzilla and the Mutos in San Francisco, I was literally on the edge of my seat, white-knuckling it.

Screenwriter Max Borenstein (who also wrote the forthcoming Seventh Son) and director Gareth Edwards (Monsters) put a lot of thought into how Godzilla would work for real. They came up with an origin juuuuust logical enough to pass muster: Godzilla and the other monsters are the last survivors of the prehistoric age who escaped decimation by burrowing deep into the earth’s crust because they depend on radiation for nutrients, since way back long ago there used to be more radiation in the atmosphere and that’s what they’re used to. The onset of the nuclear age at the end of World War II “woke” Godzilla, and in turn the other radioactive monsters such as the Mutos, sort of spider-like bat-things. It’s squinty science for sure, but it’s just plausible enough to work. 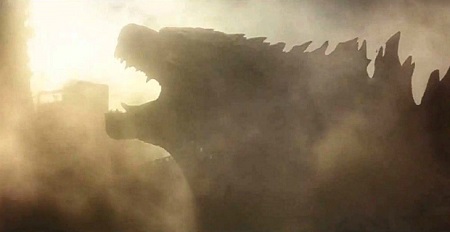 What’s great about Godzilla is that we don’t see Godzilla until about halfway through the movie. I know this frustrated people, but honestly, it’s one of the best elements of the movie. The whole first act builds you up to thinking you’re about to see Godzilla, but then it turns out to be the Muto, who wreaks havoc and you’re like, “This fucking thing.” By the time Godzilla actually shows up, the reveal is totally earned and enormously cathartic—you are so ready to watch him spank some Muto ass. The reveal of Godzilla would not have been nearly so impactful had it come any sooner. And that’s the secret of Godzilla: The monsters are the main characters, and Godzilla is the hero.

People aren’t exactly afterthoughts, but not a lot of time is wasted investing in character. In most cases, the actors hired are talented enough to hook us on the little they’re given to work with. Ken Watanabe, Bryan Cranston and David Strathairn all manage to create engaging characters, but Aaron Taylor-Johnson and Elizabeth Olsen seem confused by how little they have to do. Perhaps that’s an experience thing—the more experienced actors have enough tricks in the bag to utilize a visual/emotional shorthand for the audience, while ATJ and Olsen haven’t mastered “shorthand” acting yet.

Edwards would’ve been better off simply jettisoning the entire ATJ/Olsen family plot in favor of vignette-style character moments that follow the monsters on their trek across the Pacific. Seriously, Watanabe, Cranston and Strathairn did a good job holding down the human-fort—everything else was chaff. That was the weakest link in Godzilla, but it’s a relatively minor complaint. ATJ and Olsen didn’t bring down Godzilla, they just didn’t particularly add to it. Although, since they did keep them around, it would’ve been interesting if the movie had the balls to subvert the trope and kill off the entire family over the course of the movie.

Godzilla is an enjoyable kaiju flick that neatly disposes of the bad memory of that awful 1998 version that we all pretend didn’t happen anyway. Edwards combines found footage elements with frenetic on-the-ground framing for a visually interesting movie that saves the full-on monster shots for maximum impact. The story and (most of) the characters hang together well enough that you don’t get bogged down in the details, and the action is truly awe-inspiring. When Godzilla roars, it’s legitimately chilling.