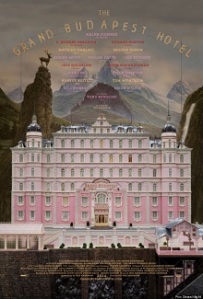 Wes Anderson is not for everyone. At this point, his films are an acquired taste, and there’s enough of a body of work for people to make up their minds whether they like the brand of hand-made, exquisitely carved life-sized doll houses he’s selling (if you told me a major director was also a serial killer, my first guess would be Wes Anderson). I happen to be an avid Anderson fan, but I don’t argue with people who aren’t. His bouts of whimsy are prone to self-indulgence, and his austere emotionalism can be hard to connect with. He’s a tremendous filmmaker but he isn’t invincible—The Life Aquatic is self-indulgent, The Darjeeling Limited is just plain bad. Still, Wes Anderson on his worst day is better than 98% of working directors on their best.

The Grand Budapest Hotel is Wes Anderson working on a very, very good day. Previously, my Wes Anderson Power Ranking looked like this:

It’s the most emotionally satisfying Anderson film since Rushmore, and its quirks and whimsies are kept right on the edge of indulgence without ever actually tipping over. The production values are as insanely high and OCD as we’ve come to expect from Anderson, and visually, the film is simply stunning. The artistic design is gorgeous, capturing the titular hotel in three distinct phases, the changing aspect ratios demarking different time periods is a nice visual cue, and the use of miniatures is as obvious as it is wonderful. Anderson is in the business of providing living dioramas for us to gaze upon and here he gives us a meticulously constructed series of exquisite decoupage boxes for us to open and enjoy with the same relish as the characters do the treats from Mendl’s Patisserie.

But what drives The Grand Budapest Hotel are the two central performances from Ralph Fiennes and Tony Revolori, with an assist from F. Murray Abraham. Fiennes plays Gustave H., the flamboyant concierge of The Grand Budapest Hotel in its last salad days in the pre-war years of the 1930s. It’s Fiennes’ best performance in years, funny and touching in turns without ever being sentimental or overplaying the darker aspects of the character.

Gustave is something of a con-man—he’s a roué and shamelessly uses lonely old ladies for his own gain, but there’s such genuineness to Fiennes’ performance that you forgive Gustave his peccadilloes. When he lays into his lobby boy, Zero (Revolori), and says just the meanest things in the world, you want to hate him, but he’s immediately so contrite and sorry—even though his tone of voice never once raises or changes between those two moments—that we forgive him just as Zero does. Fiennes uses earnestness and dignity to anchor Gustave through even the most ridiculous moments and he comes out loveable for it. 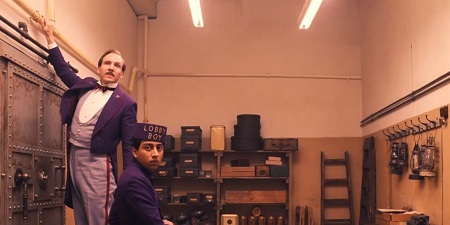 And Revolori is every bit as good as Zero. Best known for 2009’s The Perfect Game, Revolori makes the most of the limited range of emotions Anderson allows him to display. Zero is wildly unlucky yet he never mopes or bemoans his fate, and when he finally reveals what brought him to the hotel, it’s said in an even tone but with burning eyes for one of the most impactful moments of the film. Zero has this whole life and history before the movie opens that makes his association with Gustave H. all the sillier in contrast, but at the same time, it kind of makes sense how someone like Zero would end up dedicating himself to a shallow, vain man after experiencing true horror. Nothing Gustave H. gets up to can really shock him.

What makes The Grand Budapest Hotel, though, are the moments when the typical Anderson whimsy are undercut by moments of real, deep emotion. And not all of these moments are as big and blatant as Zero’s reveal—most are actually tossed off as asides. The fate of Zero’s wife, Agatha (Saoirse Ronan), for instance, is devastating in its sheer mundaneness. Abraham plays the elder Zero and he does it with such grace and perfect loneliness that even though he has little screen time, he becomes the heart of the story. There’s a raw nerve just under the lacquered surfaces of The Grand Budapest Hotel that Anderson prods occasionally, bringing crystalline moments of real-world pain to his very fake and staged film world. It makes for the most engaging and rewarding film Anderson has made in years.

One thought on “The Grand, Grand Budapest”