Going to have to double up some of these reviews or else I’ll never be able to keep up. I’m already like, a week behind here. Anyway, I’ve seen two movies at CIFF that on the surface have nothing to do with one another but which ended up connecting in my mind, thanks to a series of tremendous performances. The French import Blue is the Warmest Color and the professionally lit talent show that is August: Osage County both revolve around top-notch acting, but what struck me about them is how each approaches acting from different angles, one completely naturalistic, the other mannered and theatrical. They’re both valid approaches for storytelling, and these two movies typify how differing ways actors work can be used to drive a narrative.

Blue is the Warmest Color 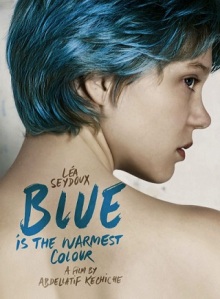 Yes, Blue is hot. The leads, Lea Seydoux (Mission: Impossible – Ghost Protocol) and Adele Exarchopoulos (I Used to be Darker) are both very beautiful and they have great chemistry and their sex scenes are unbelievably hot. But Blue is a three-hour movie and the sex scenes take up about twenty minutes of that, so there is a lot more going on. Blue revolves around Adele (Exarchopoulos) and her coming of age (the French title is La Vie d’Adele), with focus on her relationship with Emma (Seydoux), an older, openly gay artist who awakens Adele’s desire after a nice boy at school totally fails to do it for her. The sex in Blue is graphic but not prurient—we see Adele’s first, disappointing encounter (with the nice boy), and then contrast it to her eye-opening tryst with Emma.

From there, Adele and Emma embark on a relationship that spans Adele’s maturation into a working adult. Without ever making a big thing of it, Blue shows us Adele and Emma’s relationship in very real terms. Emma is out; Adele is, essentially, not. She lies about Emma’s role in her life to her parents and conceals that her relationship is with another woman to her co-workers, and ultimately that deception leads to a much bigger and more damaging situation that ends their relationship. Adele’s insecurity stems from an incident at school when her friends belittled and scorned her—even became physically threatening—when they began to suspect that she was gay. It’s hard to watch that scene and think of the struggles still faced by LGBT youth and not feel tremendously sad—echoes of that damaging episode reverberate for years in Adele’s life.

Writer/director Abdellatif Kechiche has been engaged in a war of words with Seydoux and Exarchopoulos about the way he directed their sex scenes, but however contentious things may have been behind the camera, you cannot argue with the results he got. Seydoux and Exarchopoulos give phenomenal performances, particularly Exarchopoulos who is so natural and unselfconscious in front of the camera. It’s an earthy performance—Adele eats, she fucks, she cries and snots everywhere, she sleeps and drools—but it’s so alive and real that it seems like watching a documentary, not a fictional narrative. The intimacy of Exarchopoulos’s performance is aided by Kechiche’s camera, which follows her closely, often observing in close-up every tick and twitch of her expression. Everything in Blue is geared to capture the most natural responses possible and it fully succeeds in its goal. It’s a very human film and is all the more painful for it.

On the other side of the fence is August: Osage County, directed by super-producer John Wells (The Company Men) and adapted by Tracy Letts from his own Pulitzer Prize-winning play of the same title. Starring a wet dream cast including Meryl Streep, Julia Roberts, Chris Cooper, Juliette Lewis, Benedict Cumberbatch, Abigail Breslin, Ewan McGregor, Margo Martindale and Sam Shepard, August takes place on the Weston farm in Oklahoma during a week when the family patriarch goes missing, dies, and has a funeral. The movie is slightly less dark and disturbing than the play, mostly because it focuses on eldest daughter Barbara (Roberts) and presents her as finally freeing herself from her toxic relationship with her mother, Violet (Streep), instead of laying out across multiple generations how addiction can destroy every facet of family.

August is not masterful the way Blue is—mostly because Wells’ direction lacks the intimacy and authenticity of Kechiche’s—but it is still an actor’s hall of fame and is anchored by a wonderfully venal Streep as Violet. Everyone is clearly hugely enjoying themselves, even as arguments at the supper table turn into knock-down, drag-out fights. But always August feels a bit mannered. There’s a blatant theatricality to it, which is not a euphemism for “over-acting” or a knock on its quality—this is a very quality film—it’s just that it does, at times, feel like a stage play. I enjoyed watching August and it did resonate on several levels, but it didn’t have the same sense of urgency as Blue.

More theatrical styles of acting can be very absorbing, but you are always aware of watching acting happen. With August there is so much acting happening they might as well call the movie Acting!: The Movie. Again, this isn’t really a complaint. It just gives the movie the feeling of an illusion, of being slightly outside reality, and that actually works with all the heightened emotions and crazy accusations flying around the screen. If Blue is so real it feels like being stuck in a waking dream, then August is so un-real it feels like dreaming but being aware of it. Both are engaging and entertaining experiences, but the depths reached by Blue will stay with you a lot longer than August’s self-aware emotionalism.