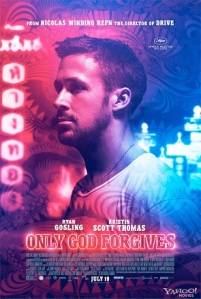 After watching Only God Forgives (available On Demand), the second film from Danish director Nicolas Winding Refn starring Ryan Gosling, I messaged Lainey to tell her that unlike Drive, which I enthusiastically loved, I did not enjoy a single second of Forgives. That can’t have been their intention, she said. I don’t know, I said. It was willfully unpleasant. And it is—there is something deliberate about how hard this movie works to make you hate yourself for sitting through it. It’s like a mean-spirited prank that goes on for ninety minutes. And yet, the movie is so well made that it can’t be called bad. It’s one of the prettiest ugly movies in recent memory.

Only God Forgives is about Some Guy who lives in Bangkok and runs a boxing gym and stares at his hands a lot. His older brother is also in Bangkok, and he sets out one night to have sex with a fourteen year old girl. When the pimp at a brothel won’t comply with this wish by just sending out

his daughter, the brother settles for raping some other guy’s daughter instead. Oh, and he also kills her. This sets off a chain of retaliatory murders that culminate in the deaths of Gosling’s drug-dealing mother (a nearly unrecognizable Kristin Scott Thomas) and a young girl’s nanny, and then Gosling gets his hands cut off and a corrupt Thai policeman sings a karaoke song and the movie is over. Along the way Gosling gets his ass kicked by the Thai policeman, does something weird to his mother’s womb after she’s dead, and screams at a prostitute.

IT IS. IT IS ACTIVELY AND PURPOSEFULLY REPUGNANT.

This isn’t Tarantino paying homage to grindhouse and exploitation genres, or an on-purpose schlock-fest like a Sam Raimi film. No, this is actively hostile filmmaking. Refn has no interest in making a watchable film—the decision making is too deliberate to be anything other than an effort to make a movie no one could derive pleasure from watching, despite its many technical proficiencies. Visually, the film is arresting. Refn composes and frames each shot with care, Larry Smith’s (Eyes Wide Shut) cinematography is beautiful, with a slick sequence of “handed off” tracking shots in the opening scene that particularly stood out. Cliff Martinez follows up his Drive score with more subtle but no less evocative music, and production designer Beth Mickle, also a Drive veteran, created dense and lived in environments using an array of interesting wallpapers. Technically, this is a very pretty film.

It’s just that everyone in it is a scumbag. And though the acting is good, everything about the performances is calculated to turn you off. Where Gosling utilized silence to communicate trauma in Drive, here he’s just being an asshole about it. Scott Thomas, comparatively, talks quite a lot but everything she says is horrifying, from outing her son as a drug dealer, to her creepy allusions to incesty relationships with her sons, to dismissing the fact that her dead son raped and murdered a kid, to calling Gosling’s prostitute/girlfriend a “cum dumpster”. To her face. At dinner. In a nice restaurant. I don’t know what Gosling did to her uterus after she was dead—it was slightly out of frame—but she deserved it, whatever it was.

Everything about Only God Forgives is either totally unpleasant or so weird and abstract it’s obnoxious. It’s deliberately spiteful filmmaking that defies the viewer’s pleasure or entertainment—there is nothing to be derived from this except for self-disgust (for watching it) and active loathing (for everyone in it). Nothing makes sense—the Thai policeman (Vithaya Pansringarm) walks around with a katana, killing witnesses and suspects alike, and everyone acts like that’s completely normal. There’s virtually no characterization to account for any of that—why would his underlings be okay with this?—and everyone else is motivated by a desire to be as awful as possible to one another. There’s nothing for the viewer to care about or root for, except for the movie to end.

I can’t recommend Only God Forgives because I don’t think there’s any way for anyone to enjoy it, but at the same time, it’s so well made and so visually interesting that I can’t say it isn’t worth looking at. This movie is like being eaten by a tiger—you really wish it wasn’t happening to you, but you can’t help but notice how beautiful the tiger is as it devours you. Basically Only God Forgives is only watchable if you want to know what it’s like to be junk-punched by a movie.

4 thoughts on “Only God Forgives is aggressively unwatchable”