Take this review with a grain of salt: I am not a huge F. Scott Fitzgerald fan. He’s arguably the most overrated author in the American canon. That said, his seminal work, The Great Gatsby, is definitely one of his best efforts (Bernice Bobs Her Hair is his best work, period). And before you start yelling at me, I know that’s an unpopular opinion but I do base mine on having read every single thing Fitzgerald has written, all hundred-and-whatever stories, and ending up underwhelmed by the sum total of his output. Still. Gatsby is good.

And it’s ripe for a new cinematic interpretation, especially as Gatsby’s themes of excess, longing for the more perfect past, magical thinking and the shades of pending doom (free thesis topic for students: Do we read collapse and nihilism in Gatsby’s story because we know what ultimately happens to his world, come October 1929, or did Fitzgerald actually have some sense of pending disaster, did his position of inside-from-the-outside, not unlike Nick Carraway, give him the ability to see the rot at the core of the economy, just as Carraway saw Gatsby riding for a hard fall?) resonate in our post-economic-collapse world. Gatsby is eighty-eight years old and yet feels amazingly modern. Of course it’d make a great movie.

Baz Luhrmann, he of the neon-lit and hyperactive adaptations Romeo + Juliet and Moulin Rouge, is the perfect guy to bring us a new retelling of Gatsby, as his detailed and lush visual style and romantic 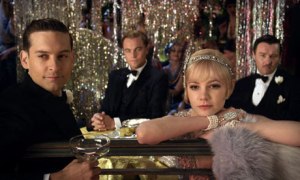 heart suit the material perfectly. Unfortunately for us, the Luhrmann that showed up to make The Great Gatsby was less Moulin Rouge and more Australia. Like that awful, over-long, bloated, self-indulgent movie, Luhrmann’s Gatsby is so over-the-top as to be migraine inducing, a loud, violently bright film that assaults your eyeballs repeatedly with more glitter and Day-Glo than your retinas can handle. And in 3D, nonetheless.

To be fair, Gatsby is not as bad Australia. The cast has actual chemistry, for one, and where Luhrmann’s style was at odds with the spare and unsparing Outback, in West Egg, he’s right at home with grandiose sets, lavish parties, and elaborate, truly gorgeous costumes. (Luhrmann’s partner, Catherine Martin, is responsible for the production and costume design and she knocked both out of the park. Hit mute and turn on some Debussy and you might be onto something.) Unfortunately, though, Luhrmann goes right past “spectacle”, which is where R+J and Moulin Rouge so campily landed, and into straight up excess. It’s just too much of everything. If every scene could be reduced by 33%–33% less loud, less bright, less people, less ACTORS ARE ACTING HERE—Gatsby might have been the combination homage/update Luhrmann intended.

Perfect example of Gatsby’s too-muchness: the narrative excess. At points in the film action is happening on the screen as Nick Carraway (played by a totally wasted and wet blanket Tobey Maguire) narrates, and just to make sure that we are.not.missing.the.point, text of the narration flies at our faces in 3 Goddamn D. It reminded me of Pain & Gain with its blunt-instrument style of storytelling. And that’s the problem here. As beautiful and lush as The Great Gatsby is, there is no grace or nuance to it. It’s shallow and vapid storytelling wielded with the precision of a Neanderthal’s club.

As for the actors, individually, they range from solid but uninspiring (Maguire) to pretty damn swell (Joel Edgerton as Tom Buchanan), but most fall into the category of “doing everything I 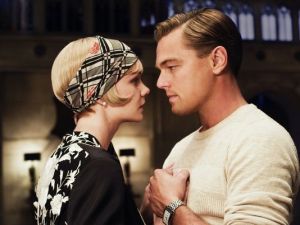 can to make Baz happy but fuck if this wouldn’t be better if he’d back up and let me work”. Carey Mulligan and Leonardo DiCaprio are two actors who have natural, easy screen presences and who can do a great deal with very little. Mulligan glows in Luhrmann’s lurid fantasy-land, but her acting is stiff and a beat slow, like she’s filtering through her own instincts to meet Luhrmann’s intent. It’s a shame, because on the surface, she’s a great Daisy. Ditto for DiCaprio, who labors mightily under Luhrmann’s direction and acts SO HARD he looks like he’s about to bust a vein in several scenes. This is why DiCaprio/Scorsese has been such a productive partnership—Scorsese knows when to get out of DiCaprio’s way. Luhrmann did well by diCaprio when he was a young man, but nearly 20 years later, he’s lost the knack.

I’ll tell you this, though. I wasn’t impressed with much in Gatsby, but that kid that played the younger iteration of Jay Gatsby, he was something. Brief part, but memorable. Callan McAuliffe—worth remembering.