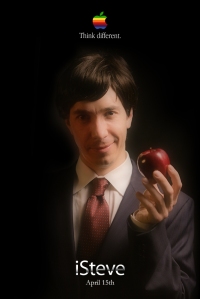 If someone walked up to me today and said, “Make a biopic of Mother Theresa but don’t do any research and you only have ten thousand bucks and two months to make it,” the result would look something like iSteve, the first feature film—though at a lean 78 minutes we’re pushing that line—produced by internet comedy site Funny or Die. I know Mother Theresa was a nun, and she helped poor people, but that’s all I’ve got. If I had to flesh out a three-act story with no research, there would be a lot of made up shit and an over reliance on the tropes of bildungsroman. Which is how iSteve played out. Written and directed by FoD regular contributor Ryan Perez and starring Justin Long as Steve Jobs, iSteve is a multi-part experiment that works, for the most part, and even hits on a few truly inspired comedic moments.

The first thing to keep in mind—the thing to always keep in mind—when watching iSteve is that this is a joke. It’s a joke, and it’s a joke with several

punchlines, the most central of which is that biopics have become less about revealing truths or telling a compelling story than about deification (see also: The Iron Lady, Lincoln, 42). Mat Honan at Wired was unable to keep that in mind when reviewed iSteve for the magazine and so he ends up coming off as the butt of FoD’s joke. But if you’re okay with an irreverent and deliberately misinformed parody/biopic of Jobs (which I was, as the extent of my knowledge re: Steve Jobs is “invented Apple stuff”), iSteve is worth 78 minutes, especially since it’s free.

Which is really what FoD’s experiment is about. Yes, they made quite a funny movie. It lags in the third act and probably would have been better served by being half as long, but the goal wasn’t to make a funny forty-minute video, it was to make a feature length film under the FoD shingle and release it—FOR FREE—online. They did that, and it’s not horrible. Parts are actually really, really funny. The “montage” of Jobs, Bill Gates (James Urbaniak, The Venture Bros.) and Steve Wozniak (Jorge Garcia, Lost) building computers by literally pounding on circuit boards with hammers and screw drivers is particularly funny. It plays on how the montage has become so hackneyed in a biopic that you don’t even need to see a proper re-enactment of the events, just the barest sketch of the idea of the event and your mind can fill in the rest, and also that building computers is actually really hard and clearly no one involved knew how to do it.

Other solid comedy beats include the complete marginalization of Steve Wozniak, Jobs’ and Melinda French Gates’ creepy virtual date night, and a scene in which Jobs berates “Justin Long” during the filming of one of those “I’m a Mac/I’m a PC” commercials. That scene gets meta but it remains funny and Long isn’t precious about his “legacy” as a spokesman for the brand. But the real meat of the experiment is whether or not FoD can make and release a feature length film, for free on the internet. The answer: Yes.

As the studio comedy is increasingly a bleak and barren wasteland peopled by the mutant corpses of Adam Sandler and Kevin James, if FoD really put their minds to it, they could become the top purveyor of not only sketch comedy but feature-length comedy as well. After watching iSteve, the natural next step is to wonder what it would look like if they gave Edgar Wright ten thousand dollars and two months to make a movie. Or Danny McBride. Or Mike White. Or Kristen Schaal. iSteve proved the merit of the experiment. Now let’s see it taken as a challenge.

You can watch iSteve here.