Our resident horror expert, my big brother Steve, is back with a review of the new remake of the 1980’s horror classic Evil Dead. This movie has been pretty divisive with fans and critics, but Steve, a seasoned viewer of horror cinema, loved it. He even went so far as to demand it be seen in theaters, saying it creates the kind of fear-frenzy that makes watching horror movies so fun. 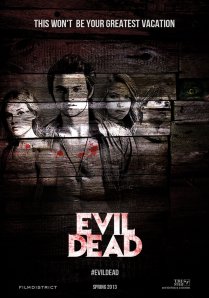 Being somewhat of a horror nerd (Sarah: Read—he’s a huge horror nerd), I’ve watched numerous documentaries on the genre where guys like Tom Savini, Wes Craven, and John Carpenter describe the atmosphere at the original screenings of their movies.  The mood is electric.  Nervous tension runs rampant.  Screams and flying popcorn litter the air…the audience is genuinely scared.  This is the experience I want to have when going to a horror flick and Fede Alvarez’s version of the Sam Raimi classic, Evil Dead, delivers just that.

Though a remake, Evil Dead is able to walk the line between staying true to the original and creating a new piece of cinema.  The five

main characters are staying in a remote cabin to help Mia (Jane Levy, Suburgatory) kick her drug addiction cold turkey.  They discover a cellar filled with dead cats hanging from the ceiling, strange artifacts, and what appears to be a book, wrapped in a garbage bag and tied shut with barbed wire.

Rather than leave, they decide to ignore Satan’s basement and stick it out, for the sake of Mia’s rehab.  Curiosity gets the best of Eric (Lou Taylor Pucci, Beginners) and he unwraps the book, which happens to be bound in human flesh and written in blood.  Being a student of the occult and theology, he ignores the obvious warnings and reads a couple of passages.  This unleashes an evil spirit that wreaks all sorts of bloody havoc from which the five friends have to try and survive.

With a rash of poor remakes hitting the screens, it’s refreshing to see a movie like Evil Dead, where you don’t walk away feeling like Hollywood is just trying to cash in on nostalgia.  And with buckets of gore and scenes to make you squirm, this movie earns its solid R rating.  There have been a lot of soft, PG-13 “horror” flicks lately that left me feeling like the director cut something out so he could get more kiddies in the seats.  For those of you who are die-hard fans of the original, you will not be disappointed.  There are numerous nods to the 1981 classic (especially visual) that will put a smile on your face.  The humor aspect is practically gone and there is no Bruce Campbell, but this film sets out to put the “evil” in Evil Dead and succeeds.