There’s a lot of talk in the latest Bond film, the Sam Mendes-directed Skyfall, about Bond being from another time and the relevancy of an old-school cloak-and-dagger espionage agent in a world of computers and cybercrime. It’s a question that works both for the character and the franchise, which turns fifty this year. It’s also a question that Skyfall answers with a resounding YES. Bond is still relevant and interesting as a protagonist and yes, you still believe he plays a vital role in covert intelligence.

I’m not a huge Bond nerd but I really liked 2006’s Casino Royale re-launch, the first outing for Daniel Craig as James Bond. (Quantum of Solace NEVER HAPPENED.) Craig, with his craggy face and boxer’s body, goes against the preconceived notion of Bond as a suave, perpetually put together British gentleman. Craig’s Bond is rougher, more basic—brutish, even—and more prone to human moments than previous Bonds. And Skyfall is Bond at his most human, most vulnerable.

He spends the first third of the movie recovering from a serious injury inflicted by a fellow MI6 agent, Eve (Naomi Harris, Pirates of the Caribbean), on M’s order, and continues to battle the residual issues from that injury throughout the film (nagging pain, loss of physical performance, a painkiller problem). Bond is tired, he’s worn out, people keep suggesting he’s getting too old for this gig and he might just agree with them.

Still, Bond wouldn’t be Bond without the glamour, and Skyfall piles on the exotic locales, exotic women, Savile Row suits and luxury brands. The product placement in Skyfall is outrageous, there’s so much of it, but it is, for the most part, blended well into the set pieces. There’s one annoying lingering shot on Bond’s signature

Omega watch, but placements for BMW and, to a lesser extent, Heineken, work much better. As for the women, French actress Berenice Marlohe (veteran of French television’s RIS: Police Scientifique) fills the jet-setting woman of mystery card while Harris’ Eve is Bond’s hometown girl. Craig and Harris have outstanding chemistry that begs for more screen time, spiced up by their rough beginning. Also, I started noticing about halfway through the movie that in all of the “new” Bond films, we’ve been missing Bond’s most famous woman and I was really surprised and pleased with how that ended up working out.

At the film prods at Bond’s “you’re getting too old for this” sensibility, it also goes back and deals with more of Bond’s backstory than we’ve

previously seen. The parallels between Bond’s issues stemming from the childhood deaths of his parents and his relationship with M (Judi Dench) are a little heavy handed, but overall the tone works for the movie. Bond must settle with his past in order to embrace his future—it’s an allegory that works for the franchise, too. This is also the film that sets up more of the Bond we “know” from previous films. The Craig-lead Bonds have been a little off-book—no Q, less gadgets, a female M—but Skyfall resets the board, matching updated characters with Craig’s more modern Bond. 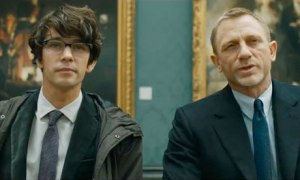 And so enter Q, played by Ben Whishaw (Cloud Atlas, The Hour), and Malory (Ralph Fiennes). Whishaw’s Q is nerdy and fresh-faced, especially when sat, literally, next to Craig. They have good chemistry, a little spiky and doubtful of the other’s relevant contributions, and their sniping earned most of the few genuine laughs in the movie. Fiennes’ Malory, on the other hand, comes across as a stuffed-shirt bureaucrat who ends up being a little more of a badass than is initially assumed. He’s older than Bond but younger than M and thus is believable as both someone who could command Bond but also represent the new, younger MI6. Fiennes and Whishaw are excellent additions to the cast and ought to be served well in the next two entries of the franchise.

Which brings us to Javier Bardem (No Country for Old Men) and his fey, effeminate villain, Silva. Much is being made of Bardem’s ambiguously gay portrayal of Silva, and Bardem throws himself into the role with juicy relish, playing Silva with an edge of camp but is no less terrifying for his immaculate blonde coif and seventies-style suits. This is a villain that feels real in a way that Bond baddies usually don’t. The stakes are relevant to our world—cybercrime and homeland terrorism—and it really does seem as if Bond might not win this one. My overarching issue with the Bond franchise is that there is never really any doubt that Bond will come out on top, but, just as Casino Royale had actual life and death stakes, Skyfall feels like even if Bond wins, he won’t really win. That’s thanks largely to Bardem and how he inhabits Silva, who is the flipside of Bond’s coin—Silva is Bond, if Bond ever lost whatever is left of his moral compass.

As for the sexual undertones of the character, I really enjoyed the byplay between the two, particularly the insinuation that Bond’s sexuality goes both ways, that he’s a man who will play any card to survive. But mostly it was interesting to see James Bond, epic womanizer, have that table turned on him and be placed in a position of sexual vulnerability. Just like his ability to improbably survive anything unscathed, which this recent run of films has done away with, Bond is always the dominant partner in his relationships. To see him on the other end of the spectrum, then, adds a new and intriguing layer to his character. Suddenly we see a hidden facet, one that shows Bond to be much more calculating and practical about surviving in his shadowy world.

You don’t have to be a Bond fan to enjoy Skyfall. Like The Avengers, this film transcends genre and is a general crowd pleaser. Also like The Avengers, it’s a little too much of a thematic lightweight for the Oscars, but Roger Deakins’ (True Grit, No Country for Old Men) stunning cinematography, working with the digital ARRI Alexa camera, ought to be a real contender for the big prize. There will always be those who prefer film, which is fine, but Deakins’ work with the Alexa proves that digital can offer just as much visual richness (as well as the crispest silhouettes you’ve ever seen, which is used to great effect in the Shanghai shootout scene) as filmstock. This is a gorgeous film to look at, and a highly entertaining one to watch.