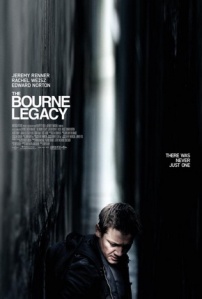 There seems to be a major disconnect between what The Bourne Legacy is and what people expect(ed) it to be. I was expecting it to be, at the very least, a decent action movie that would introduce a new secret operative with some level of fucked-up-ness into the world of Jason Bourne, and the movie did meet my basic expectations so I was pretty satisfied with what I saw. Apparently everyone else saw a different movie though, or were expecting something so different—a literal continuation of Bourne’s story, I think—that they were disappointed by what Legacy actually is. So I want to tell you what this movie is NOT, so that you can maybe get down with what it IS. Basically, this is what The Bourne Legacy is asking of you, the viewer:

Support a reptile junkie on a murder spree who kidnaps his dealer in order to ensure a steady fix to feed his drug habit.

That doesn’t sound much like a Bourne movie, right? Right. Because despite the title, The Bourne Legacy is not a Bourne movie. So don’t go in looking for that. Instead go in thinking to yourself, “I’m about to spend two hours supporting this dude’s raging drug habit and the lengths he’ll go to in order to get his next fix.”

The issues with Legacy are entirely technical, not thematic. The plot is no more “dense” than it was in Identity. But the pacing is wildly off-kilter. The first act is too 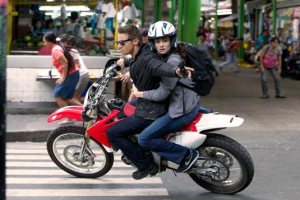 slow, the third too fast, and the middle bits run between full-throttle adrenaline and “let’s stand here and have a moral debate in a basement”. The first act’s lethargic pace is down to Tony Gilroy (co-writer of the previous three Bourne movies and director of Michael Clayton), plotting out three storylines that slowly coalesce until all hell breaks loose. But there’s no excuse for the sequel-baiting at the end. It’s a total cockblock of an ending and was easily the worst aspect of the movie, the one thing they really, truly did not deliver on. Although it is frustrating enough that it leaves a weird “well now I have to see the sequel just to make that worth it” feeling. So maybe it works? (No, it doesn’t.)

While Legacy does have less action than Supremacy and Ultimatum, it’s pretty well on par with the number of action sequences with the first film, The Bourne Identity. It’s just that Identity balanced the action steadily throughout the movie where Legacy crams it all in at the end. Gilroy doesn’t try to ape Paul Greengrass’s signature shak 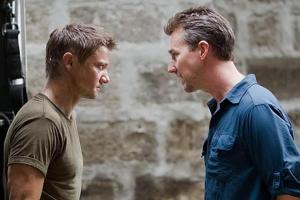 y-cam style (good call, as Greengass is the ee cummings of shaky cam), but goes for a slicker, more traditional feel. Cinematographer Robert Elswit (There Will Be Blood, Mission: Impossible – Ghost Protocol and The Town) brings a lot of style to Legacy and probably covers some of Gilroy’s mistakes, but at the end of the day, Gilroy doesn’t quite know how to cut an action scene. They’re not incoherent, but like the larger film, there are pacing issues. That has to be co-shared with editor John Gilroy (Tony’s brother and collaborator) who is a decent editor but they definitely struggled with the narrative structure of Legacy.

As for Jeremy Renner, he’s a fantastic actor, but many people seem to think he isn’t cutting it as a leading man which…The Hurt Locker. He can carry a movie. That’s not the problem. The problem is 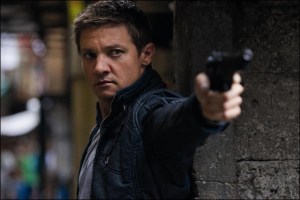 that Aaron Cross is a reptile junkie who is not very likeable. Renner is a hugely charismatic person, and he gives Cross a dose of wit and the odd touch of humor that warms him from “totally cold-blooded snake” to “lizard sunning on the road”. As a protagonist, Jason Bourne was very sympathetic. Suffering amnesia, lost, alone, horrified to confront the truth of what he’d become, we felt for Bourne as he tried to piece his shattered life back together. But Cross has no amnesia. He was not brainwashed. He willingly submitted to the program that made him, he knew what he was signing up for, and despite an early attack of morality, the Cross we deal with is a reptile. This is the problem. We’re used to having sympathy for Bourne, but Cross is hard to sympathize with.

In the beginning, Cross is kind of likeable, a chatty Cathy who desperately craves human interaction. He’s got a touch of Renner’s innate charisma, 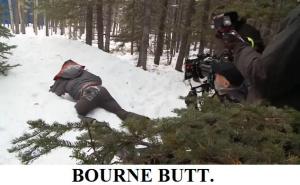 but once threatened, all that vanishes as the lizard brain takes over and he’s just trying to survive. But survival means drugs (“chems”),  which means getting to his dealer, Dr. Marta (Rachel Weisz, as the Obligatory Girl). For all the mayhem he caused, Bourne’s body count was never that high. He was a reluctant killer. Not Cross. He kills a lot of people and it’s not about getting to the truth but getting to his drugs. He’s a junkie on a murder spree! And he’s the hero!

If you’re looking for more Bourne, The Bourne Legacy won’t be your bag. But if you’re down for a decent action movie about a reptile junkie on a murder spree, have at it. Be prepared to embrace the year’s most bizarre hero.