Obvious statement, I know. But true. Let’s start with Ted. 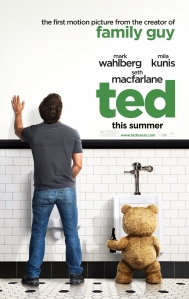 It’s way funnier than I was expecting. The thing that worried me about Ted was director and co-writer Seth MacFarlane. I’m not a huge MacFarlane fan. Not that he can’t be funny—he can be hilarious—it’s just that he tends to wear thin after a bit. Even one episode of Family Guy can feel like too much at times. So how would a ninety minute movie go down? Surprisingly well.

Ted is about a kid, John, who wishes his teddy bear would come to life, and it does. MacFarlane voices the bear, and Mark Wahlberg plays the grown-up John, with Mila Kunis (longtime MacFarlane collaborator and the voice of Meg on Family Guy) as his girlfriend, Laurie. Of course, Laurie ultimately insists John and Ted go their separate ways, tired of how Ted drags John down. It’s a standard plot, but the friendship between John and Ted is so well fleshed out that it never feels old or recycled.

MacFarlane shows himself to be a capable live action director. I actually enjoyed Ted more than I have any of his cartoons. The camera work was quite elegant for a comedy, 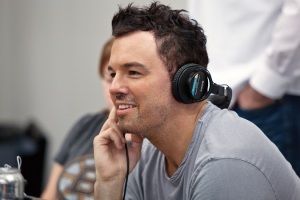 easily the best shot comedy I’ve seen since Pineapple Express (which was exceptional technical work). I would totally be into more live action work from MacFarlane. And the longer format of a movie focused his writing really well. Less scatological than his cartoons but retaining all of the nutty wit and throwaway pop culture references (sadly, I think I was the only person who got the Airplane! reference in my theater), MacFarlane might actually be a better film writer than he is a television one. And he’s not exactly a shit TV writer to begin with. My only real complaint with Ted was that the score was a touch heavy handed. It’s not emotionally manipulative, it was just really…there. I was acutely aware of the score at all times. MacFarlane is, I think, a song and dance man at heart, but dude. The score was nice but way too much of a thing. If you want that kind of music, do a musical next time. 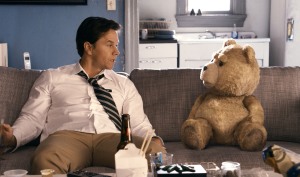 The one question I had throughout Ted, though, was why Mark Wahlberg can be so cool and groovy in movies like this, or The Other Guys, and be such a screaming prick in real life. There’s usually a correlation between people who are good at comedy and their general level of chillness (another who defies this standard is Alec Baldwin, who appears to have no sense of humor). I would like Wahlberg so much more if I thought he was as down with looking silly in real life as he is on screen. Because he’s a surprisingly good comedic actor. Where is that, the rest of the time?

And now for something completely different… 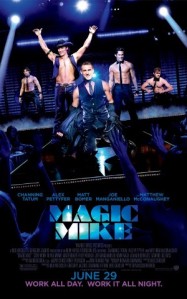 I’m a big fan of Stephen Soderbergh. He’s an interesting guy, a director driven by curiosity and whimsy, and, more often than not, I enjoy his work. (Except for The Girlfriend Experience. That was a NOT.) I dug Contagion last year, and I fully expected to like Magic Mike, and not just because of the beefcake. It’s a male stripper movie influenced by the experiences of an actual former male stripper who realized his non-dancing dreams. If anyone could take that material and make it compelling and interesting, it would be Soderbergh.

And for two-thirds of the movie, he does just that. It falls apart a bit in the third act, but not enough to wreck the movie. The wheels come off just enough for me to wonder if Soderbergh lost interest, a little, in the project along the way. Because that’s the downside of Soderbergh. He can have a short attention span. But for most of the movie, he’s right there in the sweat and body oil, showing us the quasi-reality of male stripping.

If you hadn’t heard, Magic Mike is based on Channing Tatum’s own experiences as a 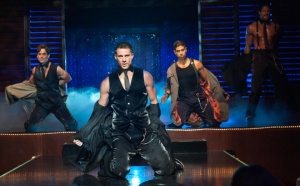 stripper (he stars as the titular Mike). Watching the movie, I thought that Tatum might be remembering his stripper past through rose colored glasses. It didn’t seem seedy enough. Not unlike Rock of Ages, I found myself asking–where is the dirt? The grit? I don’t care how classy the joint, stripping is inherently dirty and gritty (which is not to knock strippers—you do what you can to get by). The world shown in Magic Mike is basically—strip mall strip joint.

As for Tatum, well. He’s a Movie Star now. He’s still not the best actor, but he’s not the worst, either, and he is imminently watchable. Also showing well is Alex Pettyfer (I Am Number Four), who was supposed to have a huge 2011 but underwhelmed both the 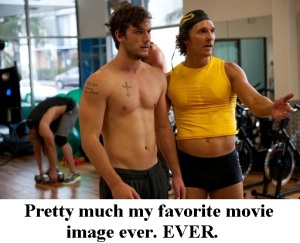 box office and the public. He’s considerably better here, though I didn’t dislike him in his movies last year. He had a little something, and in Magic Mike he definitely displays a bit more ability. I’m not saying he’s the greatest—his overwhelming prettiness is still his major selling point—but he’s not a waste of space. Not like, say, Shiloh Fernandez (who is gross). But the real stand out is Matthew McConaughey, who throws himself into the role of stripper-turned-MC Dallas. Partly I think this is because McConaughey was at no point required to wear a shirt, which must have made this a dream role, but also partly I think McConaughey is re-engaged with his career in a way he hasn’t been the last few years. There’s a lot of joy in this performance, even the darker aspects of it. I don’t know if it will be for this role or for Jeff Nichols’ Mud, but I’m still on the Matthew McConaughey for Oscar 2013 train. Make it happen! 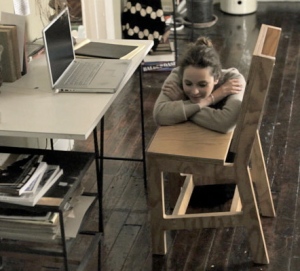 comfortable my ass hurt just looking at it, and in Magic Mike, Mike’s industrial design is so bad, every time he talked about his dreams I wanted to say, “Yeah but you’re not good at it.” This is a problem, filmmakers. If you’ve got a character longing to achieve a dream, like making furniture, please find some designs to use that are actually good. Otherwise, we’re left thinking—poor dumb person, unaware that they’re going to fail for sheer lack of talent. It undermines the message. I would rather look at copied Eames designs than some piece of crap table made out of girder joints or whatever. So if you’ve got a character with an artistic bent, don’t think you’re good enough to come up with a design for the character to use—find an actual artist to draft something for you. Put an end to the shitty furniture in movies trend!