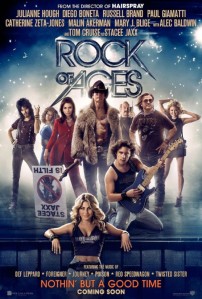 Yes, it is SUPER CHEESY. Yes, it is COMPLETELY OVER THE TOP. Yes, it is UTTERLY RIDICULOUS. And yes, even though I find musicals creepy and weird, I do love cheesy 80’s music so I am predisposed to enjoy a musical like Rock of Ages. And I did enjoy it, since I walked into the theater reminding myself that it was going to be all kinds of stupid and at times, even painfully embarrassing. Paul Giamatti is going to sing, I said to myself. PAUL GIAMATTI. This is the headspace you must be in for Rock of Ages. And if you can’t get there, I fully understand it. This is a highly-conditional recommendation. IF you like 80’s hair metal, IF you can roll with a horrendously directed movie that will still deliver on genuine beats of nostalgia and humor, and IF you can overlook the inherent freakiness of people sporadically bursting into song, you MIGHT like Rock of Ages. But keep in mind that Adam Shankman’s (Hairspray) direction is like watching a chimpanzee with space madness repeatedly run into a wall. It can be nearly impossible to watch at times.

And there’s a problem with the young lovers at the center of the story, too. They’re written as airheaded children, yes, but that’s made all the worse by casting vapid 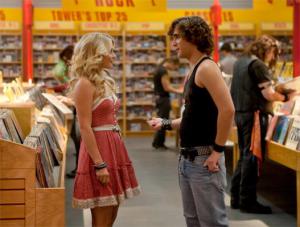 performers like Julianne Hough (Footloose) and Diego Boneta (Pretty Little Liars, 90210). Boneta, at least, has some pipes. He can’t act, but he can sing. Hough’s singing is autotune hell—she can’t act AND she sounds like every generic pop princess in the history of ever. I wonder how different Rock of Ages could have been with someone like Anna Kendrick starring as Girl From Small Town (I forget her name). Kendrick’s got some vim in her vigor (see this), and I will always have a what-if about this. I’m probably totally overthinking it, but these kids are the ones that are going to get flattened when grunge happens. Stacee Jaxx will survive—he’s basically a Steven Tyler type—but those kids will get lost in the shuffle when Kurt Cobain arrives. I kept looking for some signifiers of the impending change and got nothing. It was disappointing. Does the movie need it? Strictly speaking, no. Would it have been a better, more interesting movie with that sense of looming doom? YES.

But what we really need to talk about is…

Adam Shankman ruined Tom Cruise’s chance at the role of a lifetime. 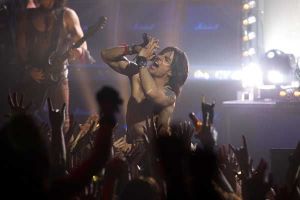 Tom Cruise was born to play Stacee Jaxx, and the tragedy of Rock of Ages is that he didn’t really get the opportunity to go full-throttle on that character.

Rock of Ages bombed. A lot of people want to blame Tom Cruise and how godawful annoying he is off screen. I totally believe that in the last decade, Tom Cruise, Movie Star has eclipsed Tom Cruise, Actor to the point of no return. BUT. Rock of Ages’ problems are not his fault. Cruise is easily, EASILY, the best part of the movie. He throws down as Stacee Jaxx, and as silly and ridiculous as he looked “singing” on that balcony in Miami—and in that ill-conceived W Magazine photoshoot—he rocks out as Jaxx. First and foremost, yes, he can sing. Not so well that he should run out and record an album (I’m looking at you, Ewan Macgregor), but well enough to do justice to the music. It’s not like Bon Jovi is a transcendent voice, you know? So he’s square on that score. And all the practice paid off—he looks very natural and believable when commanding a stage. His Cruise-ness isn’t distracting from the Jaxx-ness. They are definitely two different people.

Tom Cruise basically is Stacee Jaxx, in real life. He’s a performer who made it big in a previous era and who must reinvent himself to stay relevant to a younger audience whose tastes are not only constantly changing but also becoming increasingly incomprehensible. He’s so famous and successful that he’s become totally isolated by it and he’s surrounded by people who prey on that isolation to keep him, and the money he generates, to themselves. Even if he wants out of his cage, at this point, there is no way out, there’s only finding something to make it bearable. All that could equally describe Cruise or Jaxx, because they’re the same person. When Jaxx says, “You don’t know what it’s like in here,” it’s painful, and we feel it. Kind of.

And that’s the problem with Rock of Ages and the special loss of Cruise’s take on Jaxx. Shankman’s direction is so bad 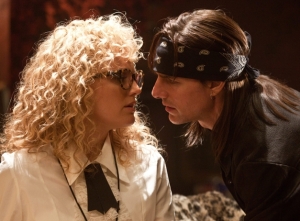 that he sucks the life out of nearly every scene. It’s a testament to Cruise’s commitment and innate understanding of the character that he’s able to salvage as much as he does, because Shankman is actively working against him. Shankman’s direction is so over-choreographed and stylized that very little that is organic manages to come through. For instance, the scene between Jaxx and Rolling Stone reporter Constance (Malin Akerman) starts out spiky, turns seductive, then gets gross. The first half is solid as Jaxx gives a barely-there and difficult interview to Constance, and even though Cruise’s torso is where sea monsters are spawned, he’s pretty effective when he turns on the sex appeal and starts trying to seduce Constance. But when she gives in, their love scene—set to “I Want to Know What Love Is”—is played for laughs, complete with gross tongue-licking and a gag involving an air hockey table.

There are plenty of places to mine humor in Rock of Ages. Alec Baldwin and Russell Brand’s characters are funny, the 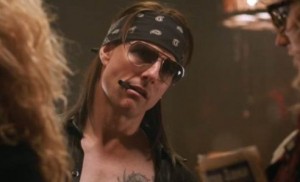 whole boy band sequence is funny, and Jaxx manages a couple moments of natural humor, but overall, Stacee Jaxx is not the one that should be going for laughs. He’s the blighted spot that throws all the 80’s glitz into relief, the reminder that the 80’s was the decade when AIDS became a full-blown epidemic and was also the era of Tiananmen Square, Iran Contra and a Wall Street crash. He’s the warning beacon for those vapid kids that there is an actual price to be paid for that kind of fame. Stacee Jaxx is dirty and gritty and wasting away from the inside out and at points, you can see that Cruise is tapped into that. That he gets that. But then, just as quickly, Shankman’s direction gets between Cruise and his character and we’re left with a cartoon somewhere in between the bubblegum and the dirt.

And that’s my lasting impression of Rock of Ages. Tom Cruise was this close to achieving something really special with Stacee Jaxx and Adam Shankman shat all over it.