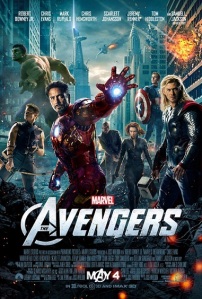 For a discussion on Joss Whedon and why he’s good for film, please go here.

If you’re sitting there going, “I don’t like comic book/superhero movies, so I don’t care about The Avengers,” well fine, but just know you’re passing up the most fun that can be had at the movies this year. The Avengers, written and directed by Whedon, is not flawless. There are some trouble spots. But when stacked against the sheer pleasure derived in watching, those issues ultimately don’t matter. Because even with a couple squiffy points, The Avengers is not a mess. It should be, but it isn’t. It works on nearly every level and is a testament to a great director working with a great group of actors and a studio that knew when to get out of the way and let the creatives be creative.

We already know 99% of the characters in The Avengers. We know Tony

Stark/Iron Man, we know Thor and Steve Rogers/Captain America and Bruce Banner/the Hulk (even if we are getting a new take on Banner, courtesy Mark Ruffalo). We got an idea of Natasha Romanov/Black Widow in Iron Man 2, who here has a much-expanded role (and you won’t hate Scarlett Johansson!). The only new Avenger is Jeremy Renner’s Clint Barton/Hawkeye, of whom we only got the barest of glimpses in last summer’s Thor. So the movie assumes that we know these people and doesn’t waste time with re-introducing them. In Renner’s case this is slightly problematic as we really do not know Barton as a person, and he spends the first half of the movie as Loki’s bitch, so there’s never a strong connection with him. Like, if he never came back I don’t think we’d miss him. Still, if you’ve missed any of the previous character movies, you won’t be left adrift by The Avengers. Whedon’s script handles characterization in very compact increments so that we get a clear picture of each person and their relationships very quickly and with minimal fuss. It’s a real accomplishment of writing.

The plot is similarly compartmentalized, centering around the Tesseract, that glowy cube from Captain America,

which if you didn’t see it doesn’t matter because one line establishes that this an Important Thing That Everyone Wants, and a responding one-liner from Rogers conveys that it is also Very Bad News. The plot in barest form is that SHIELD is trying to use the Tesseract as a new energy source but they accidentally summon Loki (Tom Hiddleston, War Horse), Thor’s half-demented little brother, from whatever space-pocket he fell into at the end of Thor. Loki immediately destroys everything, mind-controls Hawkeye into being his bitch, and absconds with the Tesseract. So Nick Fury (Samuel L. Jackson) assembles his Avengers and then proceeds two hours of straight ass kicking. Acts one and two are basically Avenger-on-Avenger violence and act three is Loki and his space army vs. the Avengers, leveling most of mid and lower Manhattan in the process. IT WILL ROCK YOUR FACE OFF.

What isn’t working in this movie is the story structure of acts one and two. It plays out more like a series of vignettes rather than a cohesive narrative, although I really don’t know how you do any better, given that you have to get six different people in the same p

lace. Whedon uses Loki as his means of bringing out each Avenger, giving them all a scene opposite Hiddleston, who plays Loki with a scary mix of confidence, aloofness and insanity. He’s a great villain and Hiddleston is clearly having a ball playing him, which makes him incredibly fun to watch. His best scene is easily the confrontation between Loki and the Black Widow, and damn if Johansson doesn’t really deliver as the uber-spy Natasha. They’re clearly sowing seeds for a potential Black Widow movie, and while I don’t think we need it, I’d watch it if Whedon was in charge. Things even out in act three, though, as the Avengers get to New York to try and stop Loki’s space army. I cannot stress enough how amazing the assault on New York is. Each Avenger has a chance to shine and everyone, even the ridiculous bow-and-arrow-wielding Hawkeye, contributes in a meaningful way. And for all the chaos that is raining down, the action is executed clearly—it isn’t a headache-inducing mess like Transformers.

Act three is also when the two Avengers who struggle most with characterization get their shit together and deliver, that

being Chris Evans as Captain America and Renner as Hawkeye. Captain America is a challenge because he’s so boring and such a do-gooder that there’s no internal conflict from which to derive drama. Evans does his level best through the first half of the movie but it’s only when Cap begins clicking along with Stark that he feels like a fully realized character. There’s just a hint of sarcasm in Evans’ delivery when he deals with Stark that serves Cap well and should be remembered for Captain America 2. Letting the inner cranky old man out of Cap makes him more interesting. As for Hawkeye, when he is finally back in his right mind, Renner delivers as a stone-cold assassin fueled by a well of cold rage. I don’t think I’d want to see a Hawkeye movie, but as a dude who lurks on the periphery he’s very effective.

But, as is always the case with RDJ, it’s Tony Stark who rules the roost. He is at his sarcastic, bitchy best, and even manages a little character arc that sets up Iron Man 3 without being obnoxious. And RDJ was right—bringing in Pepper Potts (Gwyneth P

altrow) was a good call as she humanizes Stark and makes him more relatable. Without her he’d be an insufferable know-it-all but at key moments Stark turns to Pepper and reveals the traumatized man underneath the armor both real and emotional. His storyline is easily the most satisfying of the movie, mostly because Stark is one of those internal-conflict characters that is capable of creating his own drama. He doesn’t need Loki or anyone else to propel his actions. Stealing the show, though, is Ruffalo as Bruce Banner. Like Hawkeye and Widow, I don’t think I need a Ruffalo/Hulk movie (although I’m sure we’ll get one anyway), but as an ensemble player Ruffalo is a stand-out.

The Avengers is awesome. It’s not perfect but it is damn good and is hella fun. That this movie works at all is a testament to Joss Whedon’s skill, but that it is also genuinely funny, sincerely heartfelt and some of the best ass-kickery you’ll see on screen is what makes it more than just a superhero movie. It is THE superhero movie.