The Adventures of TinTin

Here’s my problem with TinTin: It didn’t need to be animated. Motion capture is not only as freaky as hell to look at, it’s terribly expensive. For the $130 million budget, co-directors Steven Spielberg and Peter Jackson could have made a terrific live action movie that wouldn’t have given me the willies any time I looked into a character’s eyes. Although to be fair, some characters worked better in mocap than others. For instance, Thomson & Thompson (Simon Pegg and Nick Frost) and Captain Haddock (Andy Serkis), had distinctly cartoony designs with little beady cartoon eyes. Not that creepy. TinTin (Jamie Bell), however, made me want to beat him to death with a pitchfork every time I saw his weird, gummy face. Note for all filmmakers: If you’re going to do motion capture, don’t go for a human look. Think cartoony.

I found TinTin an unfulfilling experience at the movies. Everyone kept saying how it was “like Indiana Jones”, but as I watched I was thinking how Super 8 recreated that type of

movie better. TinTin lacks what Indiana Jones had—a fascinating central character. Indiana Jones was a terrific character inhabited by the absolutely best actor to play him. TinTin, on the other hand, is distinctly less interesting to watch, and blanked-out by animation as he is, Bell has no chance to imprint the character. Overall, yes, this is the best-looking mocap to date. But WHY was it mocap? Nothing about this needed to be animated. Further, it didn’t need to be in 3D. Between those two technologies, I was acutely aware that I was watching two brilliant, visual filmmakers playing with new toys. It was like Skynet made a movie and expected me to like it. What’s there to like? There’s no humanity in it.

Which is not to say that there can’t be humanity in this form of animation—after all Ratatouille, The Incredibles, Wall-E, 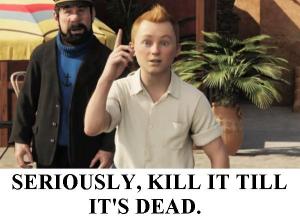 Up and Toy Story 3 are some of the best examples of humanity in cinema of the last decade and they’re all computer-generated cartoons. It’s just that no one has quite figured out how to fully marry mocap technology and filmmaking. I maintain that this is a crossroads at the Uncanny Valley from which there is probably no material end. I don’t think it can be done. The best mocap uses are for non-human characters to gain realistic motion, like Gollum. I don’t think it works as a complete filmmaking tool. It’s only good for incremental pieces like an individual character. As I watched TinTin, I watched the audience around me (because the story was silly and didn’t interest me in the slightest) and I saw faces of revulsion everywhere. No one was really comfortable with TinTin on screen. Little kids seemed afraid of him. This can work for a character that is supposed to be somewhat threatening, but it doesn’t work for a family film. Which is why TinTin is tanking at the (domestic) box office.

The Girl with the Dragon Tattoo

The main problem with David Fincher’s English-language remake of Stieg Larsson’s The Girl with the Dragon Tattoo is not that it exists—an unsubtitled version was always inevitable—but that it exists without making any significant changes. If you’re going to redo something, REDO it. I just discussed with Lainey who my fantasy re-casting choices for the iconic role of Lisbeth Salander would be (Carey Mulligan or Gemma Arteron), not because Rooney Mara (LAW AND ORDER: SVU, FRIDAY THE 13TH) sucked but because she didn’t melt my eyeballs with awesomery. Lisbeth Salander is arguably the most important female character created in the last twenty (at least) years. The character leaps off the page and face-punches you with her amazingness. Noomi Rapace, the original, Swedish incarnation of the character, had a searing, feral presence that kept you, as a viewer, in a constant state of awareness of what she would do next. Mara, in contrast, slinks onto the screen and proceeds to prove she is talented and capable of carrying scenes, but she didn’t melt my eyeballs. I didn’t care particularly what she did next. I was more into Daniel Craig’s portrayal of disgraced journalist Mikael Blomkvist.

Overall, Fincher’s version is a chilly crime procedural, worth a watch but not world-burning in any way. He builds the tension nicely throughout the movie, though he

doesn’t do anything he didn’t already cover in his serial killer epic Zodiac (I would recommend that movie over his version of Tattoo). The score by the Oscar-winning duo of Trent Reznor and Atticus Ross is perfection, however, and the opening title sequence is SO GOOD it’s definitely worth a peek eventually. It made me miss opening title sequences. Why don’t people do more of those? Tattoo isn’t the best movie of the year by any means, not even a top tenner, but it’s far, far from the worst. Don’t let the “oh why did they make this” lamentations scare you off. This is a solid rental for sure. And it should be good for several Oscar nominations, including Adapted Screenplay (Steve Zaillian), Original Score (Reznor/Ross), Editing (Kirk Baxter, Angus Wall), Cinematography (Jeff Cronenweth), both Sound categories (Mark Weingarten, mixing and Ren Klyce, editor), Director (Fincher) and Best Picture. Mara’s Best Actress nomination looks very uncertain, though.

The ending was tweaked a bit, though it is truer to the book than the Swedish movie’s ending was. Without giving it completely away, it showed a distinctly more vulnerable and affectionate side to Lisbeth which left many people 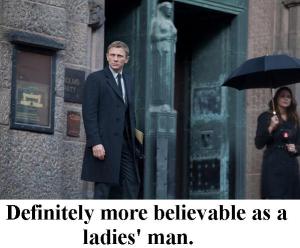 confused, if not pissed, that Lisbeth would display such “weakness”. However, to me, the besetting problem of the Swedish trilogy was that Lisbeth goes from toughened hardass to unremitting bitch over the course of three movies because there is no motive for her despicable treatment of Blomkvist. I saw someone on Twitter joke once that the final installment should have been called “The Girl Who Never Said Thank You”. Blomkvist goes to great lengths for Lisbeth, trusting blindly that he’s read this girl accurately when she’s giving him no real reason to work so hard on her behalf. Fincher’s ending, though you may quibble with the specific device, at least gives Lisbeth a palatable reason to shut Blomkvist out.

As I said to my brother as we left the theater, it wasn’t Tattoo I’m really looking forward to Fincher remaking. Niels Arden Oplev did a good enough job with the Swedish original, but the subsequent two films got progressively worse under different directors. I actively hated The Girl Who Kicked the Hornet’s Nest. Really, it’s that and the middle entry, The Girl Who Played with Fire, that I look forward to Fincher redoing. Just so long as he actually REDOES it.

I remember every horse I’ve ever ridden. There’s a unique bond between horse and rider that differs from any other relationship you can have with an animal. I’ve loved dogs, and I love my kitten Pancake, but with a horse the relationship is defined in life and death terms. When riding, your mount’s life is, literally, in your hands. But in reverse, you are wholly dependent on that animal to keep you safe, too. As a rider, your vision is better, but the horse has the instinct for the ground. You trust your mount implicitly and so must your mount trust you. Once that bond is damaged, it’s incredibly hard to repair. DJ was a sweet pony and a nice ride, but he threw me and stepped on me and I couldn’t trust him after that. Similarly, I failed Holly and she never tolerated me on her back again. I remember these failures more than I remember any successes, because the failures inform my experiences with any horse that comes after.

The only movie that has truly captured that bond is The Black Stallion, though Black Beauty, in all its various incarnations, does a great job showing how different owners

can affect a horse over time. Steven Spielberg’s War Horse is less than these two movies, mainly because I don’t think Spielberg particularly “gets” horses. I don’t think his actors “got” them and I’m not sure the horses particularly liked or “got” their riders. There was a strange disconnect throughout that made me feel cheated—I knew War Horse was missing something in the horse/rider relationship and I finally figured out what it was about two-thirds of the way through the movie. War Horse was too much war, not enough horse. Spielberg unquestionably understands how to recreate war on camera and the battle scenes in War Horse are spectacular. But Joey, the titular war horse, seems like a prop no matter how hard Spielberg tries to humanize him.

Technically speaking, War Horse is a gorgeous film. It’ll get a boatload of Oscar nominations in the technical/artistic categories. And it’s not a bad film, per se,

but it’s so emotionally manipulative (particularly John Williams’ uncharacteristically bad score), that you find yourself rebelling against all the emotions you’re being told to feel. And the ending irked me to no end, as Albert, the young man-turned-soldier who raised Joey, pleads with an elderly man—who has just as much emotional claim to Joey as Albert does—to give Albert his horse back. This is what Spielberg missed about horses. Yes, that horse/rider bond is special, but it’s possible for a horse to have it with several riders. By taking Joey from the old man in the end, I actually hated Albert a little. How selfish! By not recognizing that the true miracle of the “miracle horse” wasn’t that Joey survived the war but that amidst the worst conditions he touched so many, Albert undermines the whole movie. Extremely unsatisfying ending. And not better than The Black Stallion.