Here’s a case study of how everything can wrong for a movie that should have zero problems hitting theaters.

Tucker and Dale vs. Evil premiered at Sundance 2010 to overwhelming praise. When I say “overwhelming praise” I don’t mean that most people liked it or pretty much everyone thought it was good. I mean I have never heard a bad word said about this movie. It has a perfect 100% on Rotten Tomatoes. When I say “overwhelming praise” I mean exactly that. It’s a tsunami of love for this low-budget horror parody. So why did it take 18 months to reach an audience? Well, to be fair, anything that comes out within 2 years of being lensed isn’t that a big of a problem. There are a lot of decisions that go into when a movie is released—something can be in the can and ready to go but marketing says it’ll float better in six months so you wait. Or, if it’s a festival prospect and it’s finished after September, it’s waiting until the festival season begins again the following year. So partly the delay isn’t a huge thing because 18 months from filming to viewing isn’t too bad.

Tucker and Dale raised eyebrows, though, because of that strong Sundance open. Compare it to this summer’s Attack the Block, which had a similar rave-drawing premiere at SXSW in March. Two weeks later, Attack the Block had a distribution deal with Dimension, and four months after it debuted at SXSW, Attack the Block was in theaters. With Tucker and Dale, it seemed more a case of no one quite knowing how to sell it. It’s a gory slasher flick, but it’s also hilarious comedy. (Word to the marketers—you sell it with a straight face. This isn’t really that hard, but this movie had 5 posters in North America alone. And not like, fun character posters but five “we don’t know what our product is” posters. I’ve rated them all to the left.) There’s no “name” star and it’s a no-name first-time director, Eli Craig, whose major accomplishment is being the son of Sally Field. What are we selling? Who do we sell? (Hint: Horror comedy and the hillbillies, you morons.) So it languished until Magnet Releasing, who also brought us Hobo with a Shotgun and Rubber, got a hold of it. Even then, marketing has been pretty skint for this movie.

Tucker and Dale vs. Evil tells the story of two Appalachian hillbillies, Tucker (Alan Tudyk, Firefly/Serenity, Transformers 3) and Dale (Tyler Labine, Reaper). They’re good ole boys on the way to their “fixer-upper vacation home”—a frightening-looking shack in the swampy woods. While on their way they pass an SUV full of college kids, including the beautiful Allison (30 Rock’s Katrina Bowden), and Chad (Jesse Moss, nothing I’ve ever heard of), whom we know is an asshole because he’s wearing a pastel polo with a popped collar. Dale notices Allison at the gas station and on Tucker’s advice to “be himself” and “laugh after everything you say”, attempts to speak to her. Of course, the college kids end up thinking Tucker and Dale are knife-wielding lunatics. Later on, while night fishing, Tucker and Dale see Allison fall while skinny dipping and hit her head. Dale, smitten, rescues her and yells, “Hey, we got your friend,” to the college kids, who immediately assume this is a threat.

As the kids attempt to “save” Allison from such horrors as breakfast in bed and playing board games with Dale, they begin dying through a series of accidents that resemble classic horror-movie kills. There’s a wood chipper, a gun accident, a chainsaw thing. It’s gory, yes, but really, really funny. Tucker thinks it’s some kind of suicide pact, later Dale asks Allison if her friends might have stopped taking their medicine. They can’t figure out why these kids are running around killing themselves, meanwhile the kids think Tucker and Dale are serial killers who are torturing their friend. This is all fed by Chad, who’s a classic frat boy douche—Moss plays him with gleeful abandon. The climax occurs in an abandoned lumber mill, of course, and Dale emerges a sweet, unassuming romantic hero. 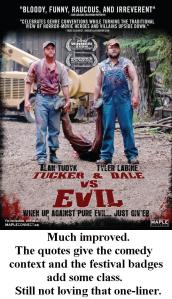 Tucker and Dale works beautifully for two principal reasons, 1) pacing and 2) comic chemistry. Tucker and Dale’s humor isn’t really punchline based, but is built on an ever-escalating series of events (classic topper) that lead to big payoffs—Tucker and Dale will make you laugh and it will make you laugh BIG. It’s all sight gags and well-placed one-liners—“this vacation sucks” and “stupid fucking college kids” get two of the biggest and best laughs in the movie. And no, you don’t have to be a horror-movie aficionado to get with the movie. You might pull more out of it if you are a horror aficionado, but Tucker and Dale plays broad enough to appeal beyond the horror market (YOU DUMBASS MARKETERS). Craig and co-writer Morgan Jurgenson deserve a lot of credit for the pacing of the film (editor Bridget Durnford, who hasn’t worked on anything I’ve heard of but who has edited several comedy specials, also deserves some kudos).

The second big thing working in Tucker and Dale’s favor is the chemistry between Tudyk and Labine. Tudyk is a stellar character actor with some decent comedy chops. You probably remember him as Wat in A Knight’s Tale, but check him out in the original English version of Death at a Funeral. The man also does flawless accents—his West Virginia twang is completely believable. Labine is an under-used comic actor—I can think of a few more famous guys who aren’t half as funny as he is. He brings a real sweetness to Dale and never loses his eagerness to help despite the often disastrous consequences. The two play well off each other but for me, the real payoff came in a scene toward the end when Tucker, who comes across as a bit more worldly than Dale, apologizes to his friend for belittling him so that Tucker can feel better about himself. How many movies really take representations of friendships THAT far? And in a HORROR COMEDY PARODY nonetheless. It’s an amazing little moment.

I can’t recommend this movie highly enough. Like Attack the Block and The Trip, I’m going to insist that you see it. Tucker and Dale vs. Evil is available on demand now and will hit theaters on September 30.

2 thoughts on “Tucker and Dale vs. Evil: It was worth the wait”