If you’ve been following me here or on LaineyGossip for the last year, you know that I’ve been nervous for Captain America. Nervous because Marvel’s plan is so ambitious that I want to see it work just to see what happens, and nervous because I like Chris Evans, generally (lately he’s been revolting, though), and I want him to break out like he’s been trying to do for ages. And if you’ve been following along you also know that my initial skepticism about Captain America: The First Avenger began morphing into cautious optimism earlier this year. I even thought it would end up the winner amongst the four superhero movies this summer, and if the weekend estimate holds, it will indeed be the big winner.

I went into Captain America still a bit apprehensive about how Cap, the boringest superhero ever, would translate to modern audiences. The answer? Surprisingly well. Despite a sneak peek a few weeks ago that had me feeling like Captain America wasn’t going to suck, I will still surprised by how good the movie actually is. Not that it’s groundbreaking filmmaking—it’s not. It’s just that Captain America works on every level. It does what it needs to do and no more than that. Sometimes succeeding means reining in your ambitions and Captain America does a good job of managing itself. Captain America is also a great lesson in what happens when you make good storytelling your number one priority.

Steve Rogers, the skinny kid from Brooklyn who can’t get accepted into the Army, is still boring. He’s still a total vanilla

boy scout. He’s a walking stereotype of “Greatest Generation” sacrifice and heroism. He’s so moral and good you halfway expect for some key lighting to illuminate a halo over his head. Yet he’s never obnoxious. In Evans’ hands, Steve is sincere, compassionate and insecure. He has zero confidence. He’ll stand up to a bully because it’s the right thing to do, he’ll offer his date some popcorn because he’s nice but Steve never acts from a place of self-assured confidence. The only thing he’s sure about is his desire to enlist in World War II, not because he wants to kill Nazis but because he can’t stand bullies.

This could all be very maudlin and sappy—which is kind of what I feared after seeing the first 20 minutes only—but the Steve that emerges from the super-soldier machine (I don’t know what to call it) is still the same compassionate, bully-hating fellow. In the context of the new, more powerful body, with all the sex appeal that that entails, Steve avoids the sap by remaining insecure. He still doesn’t know how to talk to girls. He’s still not sure he’s good enough. He’s still going to do the right thing because it’s the right thing, but he no longer knows what the right thing is. Is it parading around in a silly suit to help sell war bonds? Or is it disobeying orders and going on a suicide rescue mission?

The key to making Steve work for a modern audience was showing us a man who will always, always do the right thing, whose honor cannot be compromised, and making him so SHY that he still feels like an underdog. He also works because he was given a foil worthy of his goodness. Enter Peggy Carter and Hayley Atwell (Pillars of the Earth). This part was refused by Emily Blunt which—she’s crazy. This was a BAD decision on Blunt’s part and there’s no other way to put it. Peggy is the heart of the movie. She’s as important to the narrative as Steve is. Atwell, however, is not crazy and she took the part and she absolutely shines in it.

a foundation of mutual respect and understanding. She knows Steve when he’s still a ninety-pound asthmatic and first admires not his body but his good heart. It sounds so cheesy but you don’t realize how truly terrible these kinds of relationships have gotten in movies until you see the slow, restrained build up of Steve and Peggy. It makes the Thor/Jane relationship in Thor look especially cheap. Steve and Peggy ground the story and as their relationship changes into a romantic one the audience begins to get the creeping feeling that something is going to go wrong (the girl sitting next to me whispered, “She’s going to die, isn’t she?”).

discovery of Cap’s shield frozen in a plane wreck. But how things go wrong will break your heart. It’s cheesy, yes, when Steve and Peggy are on the radio together at the end, making a date, but the audience was audibly choked up when the transmission cut out. And the final scene was surprisingly crushing, with Steve scared and disoriented in modern-day New York, with barely enough time to register sadness when he realizes he’s missed his date with Peggy by seventy years. Captain America was written by Christopher Markus and Stephen McFeely (best known for adapting the Narnia series), but it’s Joss Whedon and his unaccredited rewrite at play here. This movie has Whedon’s fingerprints all over it.

The final beat of the movie is an odd one, a surprisingly human one for a comic book movie, but the impulse, after all that 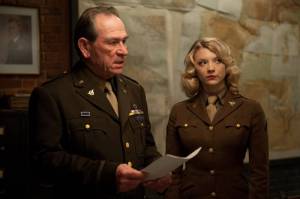 build up, would be to show us a ninety-year-old Peggy and Steve dancing, or to introduce Peggy’s granddaughter as some kind of resolution. Instead we’re left hanging, like Steve. This is how they’re going to make a modern audience care about Steve Rogers—heartbreak. And it works. This I’m going to put down to Whedon since director Joe Johnston (The Rocketeer) has expressed displeasure with having to do this scene, which came as a late reshoot earlier this year. Not everyone loved this ending but I dug it because it avoided all the sappy pitfalls inherent in the problem of having both a real and wonderful romance and the imperative to get your character into the 21st century. I felt that Steve’s last line was the only “out” for the story that didn’t involve a massive eye roll. 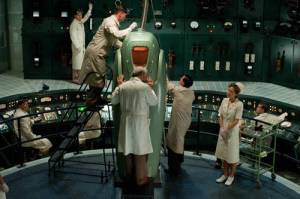 a lot of attention but I thought Toby Jones (he’s the voice of Dobby!) was a standout as the Red Skull’s patsy, Dr. Zola. Hugo Weaving was appropriately campy as the villain, Red Skull. His makeup was great, it did most the work. The visual effects were very good, especially early on with the “skinny Steve” effect that blended well into the real environment. Costumes were solid and so were the period details. Cap’s suit read better on film than it did in photos, though the helmet is still stupid and I hope Tony Stark makes fun of it. Dominic Cooper (Tamara Drewe) makes good use of his few scenes as Howard Stark, and Gossip Girl twat Sebastian Stan took a step in an un-twatty direction as Steve’s best friend, Bucky.

I was very pleased with how Captain America turned out. It’s the big hit Marvel needed to be and a strong platform for The Avengers next summer (much stronger than Thor). Evans and Atwell delivered solid performances that completely sell the story and save it from the land of utter cheese. Evans deserves extra credit for believably inhabiting both versions of Steve and for keeping Cap from becoming a cartoon. Overall the movie has an assured, old-fashioned tone not too far from Indiana Jones and I wouldn’t mind seeing more of WWII-era Steve—the ending leaves enough open that future Captain America’s could take place then or now. Oh and the shield-slinging? It’s cool. Really cool.