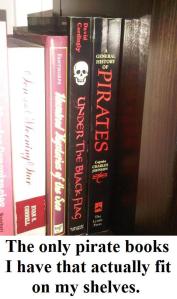 I love pirates. I love everything about them. I love the inflated, cartoony fantasy life we create for them and I love the harsh unyielding misery of their actual seventeenth-century lives. I love the mystery of lost treasure and ships, and the possibility of finding those ships (is this really the Queen Anne’s Revenge?). I seriously love pirates. So much, it’s not something I often share with others, like the zombie thing. That’s fun and whatever. Pirates are a serious hobby for me (…cripes I need more friends, don’t I?).

So OF COURSE I was all over the first Pirates of the Caribbean movie. I just knew that The Depp being weird + pirates = GOLD. And it was. Disney raked in over $300 million (domestically) off that film. They went on to make two more, completing a trilogy. But there was a problem. I liked each Pirates film less than the one before. Partly because The Depp’s performance as Jack Sparrow was so surprising the first time and felt like old hat by outing number two, and partly because the movies actually were getting worse. Bloated, too long, self-indulgent, over-complicated. There was a lot wrong with those second two Pirates movies—not that the first one wasn’t without its problems. (Whatever, I still love that one to this day.)

All those things came back in Pirates 4: Arr, give me your money. It was WAY too long. It was WAY too bloated. It was WAY too self-indulgent. The plot was WAY too complicated. I was praying for it to be over about forty-five minutes in. Even as I was thinking, Man, Jack Sparrow is a once-in-a-generation pairing of actor and character, I was wishing for it all to end. There is very, very little that I liked about Pirates 4. So let’s start with everything that was wrong: Everything.

Well, almost everything. Most of it. Pretty much all of it. Yeah, okay, everything. Despite having elaborate sets and visual effects and the kind of crazy high production values that $250 million will buy you (wait, TWO HUNDRED AND FIFTY MILLION DOLLARS?! That is INSANE), Pirates 4 falls flat at every turn. The action sequences are too long and too frequent—the entire movie was basically thinly-veiled plot devices strung between inexplicable action sequences. You could probably shave a whole half-hour off the movie just by editing down the action. And the story makes so little sense that I forgot why things were happening almost as soon as they were explained. Admittedly, this was a problem in the previous two Pirates films, also. Seriously, ask me to explain exactly what happened in that movie and I can’t do it. And I have a good memory for this stuff.

Jack Sparrow was in London? But he was kidnapped by the English king, who I think they called King 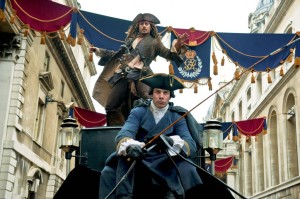 George III, except that was the king that we fought in the Revolutionary War and the previous Pirates movies established that the action was happening in the late seventeenth century? Which was nearly eighty years previous? Which means Jack Sparrow would be like 120 in this movie? And the king wanted Jack to go to the Fountain of Youth before the Spanish? And Jack finds out that his ex-flame Penelope Cruz has been impersonating him? And she’s Blackbeard’s daughter? And Jack ends up on their ship? And there’s a hot missionary? And some mermaids? And the Spanish destroy the Fountain because it offends their religious sensibility? And the Spanish king is that guy from The Losers? And Jack and Penelope go their separate ways? And Geoffrey Rush’s Captain Barbossa is completely superfluous?

Describing that movie turns me into one of those stupid girls who says everything like a question. Because I’m not exactly sure what all happened, or why 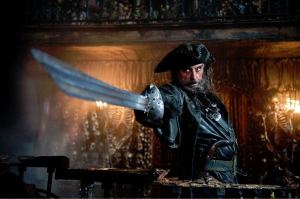 it was happening. It’s a vague blur of stuff blowing up and sword fights, including one between Jack and Pene that was pretty much exactly like the one between Jack and Will Turner (Orlando Bloom) in the first Pirates movie. And poor Geoffrey Rush, though always enjoyable as Jack’s frenemy Captain Barbossa, is completely useless this time around. With Jack and Pene (what was her character’s name? I really can’t recall) and Ian McShane (Deadwood, Pillars of the Earth) doing captain duty, Barbossa is just another person sucking up screentime. He’s around to deliver one plot device that really, anyone could have done. Poor Rush. He won an Oscar once, you know? And McShane is fine as Blackbeard but really, he’s playing every villain exactly like Al Swearengen.

So what did work in this bloated stinky whale carcass of a movie? Jack Sparrow really is a great character, and he’s more fun to watch here than he was in the increasingly depressing sequels from before. Even as the movie around sinks under the weight of its own 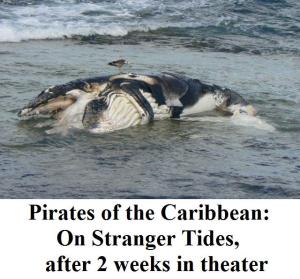 ridiculousness, The Depp brings a spry wit and physicality to Jack. The mermaid was cool. I think when Michael Bay casts someone like Megan Fox or Rosie Huntington-Whiteley to be one of his “pretty females who doesn’t do much”, he is going for the effect that French actress Astrid Berges-Frisbey achieved in Pirates 4, but Jerry Bruckheimer is better at casting than Michael Bay. Also tolerable is Sam Claflin (Pillars of the Earth) as the hot missionary (didn’t catch his name, either). He didn’t have to do much but he was very watchable. I’m not sure if the guy could carry a movie or how he comes off in a modern-era role, but he’s good at the swashbuckling stuff. 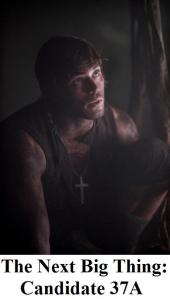 We never really saw what happened with Claflin’s character in the end, after the mermaid pulled him into the water to save him (logic???), but I’m assuming he lived under the sea with his mermaid-ladylove, like Tom Hanks did at the end of Splash. Given how things have worked out for the sidekick character in previous Pirates movies, I’m pretty sure my ending is better than anything Bruckheimer & Co. would have come up with (see also: Will Turner taking it up the ass at the end of Pirates 3). So yeah, Pirates 4 blows. At least we can look forward to the adaptation of Gideon Defoe’s The Pirates! In an Adventure with Scientists next spring. That’ll be funny.