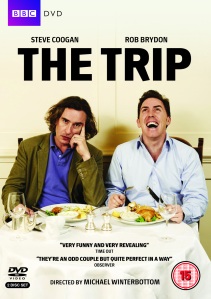 I start this off by confessing that I’m a huge Steve Coogan (Tropic Thunder, The Other Guys) fan. Back in my comedy days, Coogan was a comedian all the other comedians knew. He’s not a traditional stand-up, but he’d been doing a character called Alan Partridge on various BBC shows and specials since the nineties. Everyone seemed to know Alan Partridge but me, so I made it my business to find out, and I ended up falling in love with Coogan’s comedy. He’s a genius. He can do anything. Hackey stuff like voices and impressions but also the really high-minded, long-con style jokes that only the smartest and best-prepared comedians can pull off. His one-liners are brutal and quick. Nothing is beyond his grasp. I actually screamed like a tween when he popped up in Around the World in 80 Days, opposite Jackie Chan. FINALLY, Steve Coogan was crossing the pond.

But then…he kind of stalled out. He’s done solid support work in US comedies over the last eight years, but his only leading role was 2008’s Hamlet 2, which is one of those polarizing movies that half my friends love and half loathe. In the UK, Coogan is a successful guy who gets a lot of work. Over here, he’s a That Guy at best.  The idea of a talented performer struggling to break through to the next level is what anchors The Trip, Michael Winterbottom’s (The Killer Inside Me) largely improvisational movie about two aging actors on a foodie trip through northern England.

The Trip works. It works on every level. It’s not going to be for everyone—it’s too depressing and introspective at times to sell as a straight comedy—but for those looking for a really good comedy with a dash of reality, The Trip is it. Coogan and Brydon

perfectly capture what happens to comedians as they age. For Brydon, a guy who has not crossed the pond at all, you see the complacent comedian. Brydon is also an accomplished comic, a noted voice over artist and a decent singer. He’s a popular TV star and personality in Britain and he seems fine with that. I wouldn’t say Brydon has lost his funny like Adam Sandler has, but something definitely happens to comics as they age, especially when they get successful, and they become complacent. The edge disappears. Where Coogan is all cutting remarks and anxious energy, Brydon is easy-going, in for a laugh and nearly impossible to insult. He knows exactly who and what he is and he’s content with it. He doesn’t push for more.

Coogan, however, is pushing for more. He wants more success, bigger success. There’s a nasty edge to his jokes—almost all of them come at the expense of others, particularly Brydon. He isn’t happy with his lot, he isn’t calmly accepting he’ll never be more than he is. Coogan is frequently on the phone with his American agent and he dreams of success and failure. He’s kind of a terrible person, unfaithful and vain and so mean to Brydon, yet then we see him talking to his son back in London and we get the idea that there is a nice guy in there somewhere. The best comedy is true, and I think a big part of the reason why The Trip works is that Coogan and Brydon are these guys, to an extent.

The Trip captures the darkness that hounds so many comics. A lot of comics will joke about “the darkness inside” but it’s true. It’s there. When I was doing stand-up, I was a terrible, awful person. Nothing was off limits, any experience could be mined for material and I didn’t care if it meant having to embarrass a friend in the process. The competition and constant search for new material brings out the worst in so many comics (it did me), and what The Trip nails so perfectly is what happens when you either let all that go or continue driving for more. It also nails what it’s like to hang out with actors. The vanity, the one-upmanship, the way every little thing turns into a competitive showcase. Throughout the film Coogan and Brydon do competing impressions of various actors, most notably Michael Caine. These impromptu throwdowns are hilarious and make for some of the best laughs in the movie but actors really do shit like that.

Throughout The Trip I found myself wondering how much was “real” and how much was “fake”. Like, is Steve Coogan really that discontent?

I hope not. And he is really so mean to Rob Brydon? They’ve been collaborators in the past—I hope their relationship isn’t really that antagonistic. But that ambiguity is exactly what makes The Trip so impressive and funny. You don’t know how much is Real Steve Coogan and how much is Movie Steve Coogan. Everything is so much funnier because of the chance that these two guys really aren’t kidding. I almost died laughing when Coogan eulogizes Brydon at Bolton Abbey in one scene—Brydon’s sincere response makes the entire bit.

While 2011 has so far been a disappointing year at the movies, there are a lot of promising comedic titles on the slate. The Trip will undoubtedly stand out as one of the best of the year. The Hangover II may be bigger and flashier but I guarantee you won’t find a better brodown this year. Oh, and if you do see The Trip (it comes out in limited release on June 10), tell me if you can spot the EXCELLENT Monty Python reference.