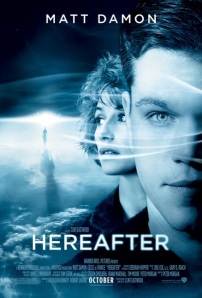 One of my central problems with Clint Eastwood’s Hereafter is its incredibly listless vision of the afterlife. There’s a lot of standing around in a shadowy realm, feeling weightless, and having expanded consciousness. Not much else is going on. Expanded consciousness would be pretty cool, I guess, but if that’s all there is to eternity, then it’s going to feel like, well, an eternity.

Whether you call it “heaven” or “the hereafter”—whether you believe in it at all or not—representing the afterlife is tricky. Hell is kind of easy since humans are hard-wired to fear essentially the same things—fire, pain and torture, that sort of thing. But how do you represent heaven? It’s different to all of us, right? I mean, if I get to heaven and there are no unicorns, I’m going to be seriously bummed out. (My favorite meditation on the hereafter is Mark Twain’s Extract from Captain Stormfield’s Visit to Heaven, where Captain Stormfield finds he can pick his own age and physical representation, he can live in whatever geographic region he wishes, and if he had some great undiscovered talent on earth—say, poetry—in heaven he could rise to be greater than Shakespeare. It’s a satire but it’s a great look at how the afterlife is so unknowable that to assume we know exactly what it is, is both naïve and short-sighted.)

I was hoping for something like Twain from Eastwood and instead I got a boring limbo-like place where everyone whispers but no one seems to move. What is the negative side of this place? Is there a negative side? This is never directly addressed. Hereafter’s hereafter seemed calculated to not offend, which would be okay if it weren’t so BORING. Inoffensive and dull are two entirely different things. I think I’m bugged the most by the fact that no one seems particularly happy in the hereafter. That’s kind of depressing, isn’t it?

As for the movie itself, well, it’s okay. It suffers from “too many movies stuffed into one” as Wall Street: Money Never 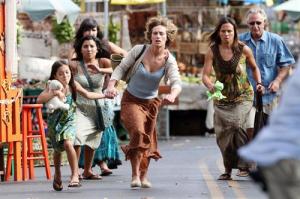 Sleeps did. Hereafter follows three separate storylines that intersect in a completely foreseeable way. The movie opens with Plot 1, which features French television journalist Marie Lelay on vacation in Southeast Asia. On her last day she goes shopping in the local market to buy gifts for her lover Didier’s children (he is later revealed to be Marie’s producer at the TV show, played by Thierry Neuvic). A tsunami strikes while Marie is shopping, she is swept away and appears to die. First, CGI water is the lamest thing ever. Even more lame than CGI fire. Eastwood used way too much CGI in this sequence—the changeover to water tank shots is shocking and distracting. Second, it is still effective enough that I am now terrified of tsunamis. Without actually stating it, Eastwood and his team effectively recreate the December 2004 tsunami.

This segment represents the strongest storyline in the film. Marie is played by French actress Cecile de France and she is very fine in this role. She’s beautiful and engaging in that way that all French women are but she also evokes a real vulnerability—the strong, assured woman thrown off her confident path by an event she can’t rationalize. While temporarily dead (though not due to tax reasons), Marie is given a glimpse of the (boring) hereafter. Understandably, she wants to know more about what she saw. Predictably, no one in her life is particularly encouraging of her newfound interest.

De France gets to deliver most of her part in her native French, though she does have some English toward the end and her accent is lovely and completely understandable. For all the fuss made about Marion Cotillard lately, and Audrey

Tautou before her, Cecile de France is the French actress I suddenly want to see more of. Her composure when Didier leaves her is moving and her bewilderment at the resistance she is met with when she tries to write a book about her experience shows how separated from her old life Marie has become. This was by far the most effective storyline in the movie and I kind of wish it was just about Marie and her experience. 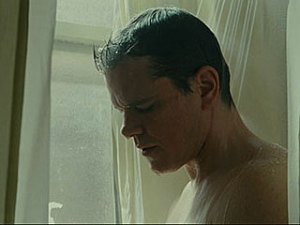 Plot 2 is Matt Damon’s story about a professional psychic, George Lonegan—he’s the real deal, the movie makes sure to show us—who has given up his lucrative career as a medium to work in a sugar factory in San Francisco. George is very lonely—so lonely the word “lone” is actually in his name, hello subtlety. There are several fine shots of George in his lonely little apartment, doing lonely things like eating alone. George signs up for a cooking class and meets Melanie (Bryce Dallas Howard, Twilight: Eclipse, The Loss of a Teardrop Diamond), who is new to town and also lonely. 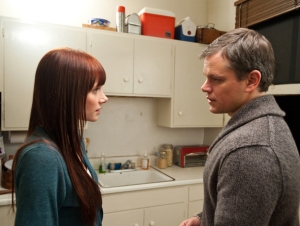 obnoxious through no fault of Howard’s. It’s just that Melanie serves only one purpose—to demonstrate exactly how George’s ability to peer into the hereafter ruins his life. So she is nosy to the extreme—I found myself whispering, “Forward!” to my friend every time Melanie opened her mouth because she was so pushy. In the end she serves her purpose—George warns her that once he knows everything about her she won’t want to be around him anymore. Sure enough, he reveals a devastating trauma in Melanie’s past and she flees into the night, never to be seen again.

Life gets worse for George—his brother (played by a barely-watchable Jay Mohr, he is so repugnant in this movie, more so even than usual for him) wants him to get back into the psychic business, seeing only the opportunity to make money, not the terrible toll it takes on George. And George loses his job at the sugar factory. At loose ends, he decides to go to London instead of go back into business with his brother. Damon is very sympathetic as George, however, he doesn’t have much of an arc, like de France does; it’s all pretty much one lonely level with him. 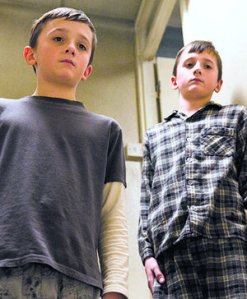 London is where Plot 3 plays out, the most dispensable story in the lot. Twins Jason and Marcus live in lower-class London with their junkie mother, covering up for her, trying to inveigle her into rehab by ploys of adorableness. Through a series of predictable events–seriously, the minute the twins are differentiated as “talkative” and “mute” you know the fun, chatty one is going to die–Jason ends up the victim of a traffic accident (effective extra emoting by thug #4 who really conveys his horror at what his bullying has wrought) and Marcus is all alone, left in foster care when his mother goes into treatment.

As far as I can tell, Marcus exists solely to a) mope and b) provide a target for George’s “you are not alone” speech. Also as far as I can tell, George could have delivered that speech to Marie and the movie would be fine. Marcus also allows for the film to recreate the 2005 London subway bombings—of course Marcus’s hat is knocked off just as he starts for the Tube and he must go back and get it, thus not being caught in the blast—which, after the tsunami in the beginning, made the disasters start to feel gimmicky. Like there needs to be a constant stream of traumatic events to keep this story moving forward. Were it me, I would drop the Marcus/Jason storyline and focus on Marie, making George a supporting character in her drama.

The three plots converge at the London Book Fair where Marie is reading from her book about her experience. George spots her, 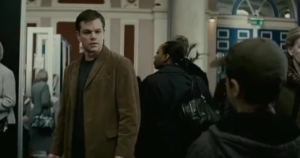 identifies with her, and falls for her. Marcus of course ruins everything, wet blanket that he is. Instead of matching Damon and de France up for the remainder of the film, we veer off with Marcus and the “you’re not alone” speech. Ultimately, George and Marie do meet up, and in a stand-out moment of directing for Eastwood—in this film anyway—George imagines touching Marie and not “connecting” with the hereafter (an earlier interaction shows George glimpsing a drowned Marie when they touch), but when he snaps out of it and actually clasps hands with her, Eastwood doesn’t show us what happens. It’s a subtle move in a film that is otherwise obvious at every step.

I am not on the Clint Eastwood bandwagon. As a director, he is capable, technically, but he seems to struggle with picking material. I didn’t like Grand Torino and we won’t speak of the execrable Space Cowboys. Hereafter is another case of “poor material, decent direction”. Eastwood doesn’t deliver a masterpiece by any means, but in instances is able to bring it up a notch and make me care for a few seconds at a time. And he certainly does have a knack for framing shots of lonely people. I’m just not sure the sum total of Hereafter is worth those brief glimpses of something more. Not unlike the vision of the afterlife it presents.

Update: Oh yeah, the score is HORRIBLE. Really, truly TERRIBLE. There are three themes (one for each plot–violin, classical guitar, and piano) and they ALL SUCK.