It was funny. Like really funny, with genuine laughter, not those half-laugh, half-huff things that so many comedies settle for. In key moments, Easy A went for the gut-buster (such as Olive and Brandon’s fake sexcapades at a party) and the movie achieved big laughs each time it reached for them. Emma Stone (Zombieland) showed off her star stuff—and she has oodles of it—as she carried nearly every frame of the film. Her comedic timing is superb and she can slide from gorgeous to whacky and back so fast as her facial expressions change that I was strongly reminded of Lucille Ball.

Stone isn’t a subtle actress but one of big talent, big gestures, and deadpan delivery. Easy A took her tendency toward the grandiose to the max, playing high school nobody-turned-sexpot Olive Penderghast as a person who cannot settle for the mediocre middle but must go to the furthest extreme in every scenario. I found myself wondering, as Olive did too in voice over, why she kept perpetuating the growing lies

about her sexuality (in case you missed it, Olive inadvertently starts a rumor that she lost her virginity to a college boy, then goes on to become the school slut, except she’s not really sleeping with these boys, just letting them gain cool points off her supposed slutitude).But you could see it in Olive, via Stone’s ability to drop the ironic mask and give us a big-eyed, soft-hearted Good Person who can’t stand to see her peers miserable. And in her desire to help her peers, Olive goes for the grand gesture every time. Even setting the record straight at the end involves a musical number complete with marching band.

The supporting cast of Easy A was solid. Stanley Tucci and Patricia Clarkson (Shutter Island) are very funny as the Best Parents Ever, Thomas Haden Church (Sideways) and Lisa Kudrow acquit themselves well as teachers at Olive’s school (Kudrow especially is good as an unhinged guidance counselor), and Gossip Girl twat Penn Badgley is surprisingly not obnoxious as the object of Olive’s real affections, Todd. Recently un-retired Amanda Bynes (Sydney White, What I Like About You) and Cam Gigandet (Twilight) are obnoxious and toxic Jesus freaks, Malcolm McDowell (Barry Munday, Heroes) and Fred Armisen (SNL) have solid cameos, and Dan Byrd (Heroes) and Alyson Michalka (Hellcats) are pleasant in small roles.

But it was The Emma Stone Show from start to finish. I can’t think of another young actress whose comedic timing and delivery are as sharp as Stone’s. She has the ability to be tough without being harsh and vulnerable without eliciting pity. This is Stone’s star-making turn, and if the next few years shake out in her favor, she’ll be around for a long time. It was really fun to watch Stone trounce all over Bynes, who once headlined her own “comedy” show on TV, in their exchanges. It’s easy to see why Bynes has gotten left in the dust in favor of other actresses like Stone. It was equally a joy to watch Tucci and Stone in their repartee, showing what talented actors can do with sparkling dialogue (credit to first-time features writer Bert Royal).

The movie itself, however, left me a little confused. I enjoyed watching it, it made me laugh, but as I thought about it

afterward a frown began to form. One of the strengths of Easy A is how clearly it defines the double-standard in sexual politics we’re all so familiar with: a man’s reputation is enhanced via his sexual exploits, but a sexually free woman is branded a slut and an object of scorn. Easy A strengthens its position by equating Olive’s predicament with Hester Prynne’s in The Scarlet Letter as Olive’s class reads the book. When one horrid girl tells Olive she should wear a red “A” on her clothes like Hester did, Olive actually does this, essentially ostracizing herself. Olive determines that if the students already think of her as a “whore” then she should just embrace this role. It’s not terrible thinking that if you own the label it can’t hurt you.

My confusion comes from the resolution. Olive’s reputation has gotten so bad that fourth-year senior Micah (Gigandet) blames his Chlamydia outbreak on Olive, which pushes Olive over the brink and she begins looking for an out from her situation. All along Olive has been helping the rejects and outcasts of her school find some even footing amid treacherous high school territory—she even lies for the guidance counselor to keep her marriage together—but all Olive has done is flay her own reputation to the point that fellow students are demanding she be expelled. Amidst it all is Todd, the one guy who doesn’t believe the rumors because he knows the “real” Olive, the girl who once lied for his benefit (Olive seems to have a problem with lying that her experience, one assumes, cures).

reference ruined by a terrible 80’s-song cover). I was happy it all worked out for Olive, that she restored her reputation not as a slut but as a virgin and that she learned the value of honesty and privacy, but…well it kind of undermined the point about the sexual politics. The whole mess started when Olive suggests to the gay kid getting beat up every day that it’s better to just blend in with the crowd than stand out, thus leading to their supposed party hook-up. But when Olive herself is singled out, she is unable to take her own advice and stands up to that same crowd, defiant in her right to be individual. Okay, great, good.

It’s just that in the end, when Olive is having her moment, singing a sexy song in a sexy getup and gets all the students on their feet cheering for her, does she say, “Accept me, accept the dweebs and the dorks, and we’re all out of here in a couple years anyway”? No. She says, “But it was all a lie, I’m really a virgin!” And everything is fine. Ultimately, Olive caves under the same system she was trying to break. As for Brandon, the beat-down gay kid, he runs away and the un-celibate Jesus freak Micah is banished to Florida. So Easy A’s message is that if you act upon your nature over the preconceived mold given to you in school, you must either ultimately rejoin the crowd or be cast out of it? 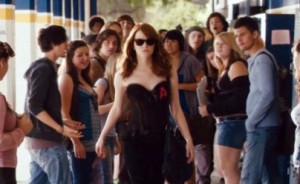 I’m not sure. Easy A does such a good job articulating the cost of challenging these sexual politics that I don’t think it entirely fails to make its point that labels suck, individuality is the best, and we shouldn’t listen to rumors. But Olive’s revirginization clearly shows that she is unable to survive outside the circle. And I get it, she’s just a kid. High school is hell, and it can be truly life-scarring for those who live at the bottom of the social hierarchy, but movies like this are supposed to show us how to end that hierarchy, not tell us to give in and submit to the herd.

It’s the specific proclamation of Olive’s virginity that bugs me. She has already exposed the real culprit that gave Micah Chlamydia, she knows that Todd knows she isn’t really a slut—why must she clear her name with everyone else? I guess then we wouldn’t have a movie, since it’s told from Olive’s perspective as she clears her name. But for a movie that involves issues of privacy—and a rant from an elder about this young generation’s need to document everything to their own detriment—Olive’s proclamation seems like kowtowing of the worst sort. But maybe the real point is that in the end she takes her own advice and blends into the crowd.