It was going to be a problem. I knew as I left the theater that there was a fundamental flaw in Scott Pilgrim vs. The World. A problem I overlooked because the any-and-everywhere ad campaign seemed to override the inherent issue. Scott Pilgrim has no mass appeal.

Kick-Ass hit the same wall earlier this year—pushing a fanboy fantasy on the masses and the masses met it with resounding indifference. To be fair, Kick-Ass has done very well on DVD, so word of mouth will eventually pay off for Scott Pilgrim, but the theatrical box office echoes the message Kick-Ass (perhaps even last year’s Watchmen) started. The public at large is not interested in real-life superheroes. Give them alternate universes like Gotham or fantasy futures like X-Men and the public will eat that shit up, but the “real life” superhero stuff ain’t selling.

By “real life” superhero I don’t mean stuff like Iron Man, which is set in contemporary Los Angeles, but superheroes who have no actual talents or special abilities. While Tony Stark’s super power is his brain and his capacity to build neutron colliders in his basement, he exists in the same universe as Thor and Captain America, who do actually have super powers. Scott Pilgrim, like Kick-Ass, is about a regular Joe who gets sucked into a videogame life. And it doesn’t cross over.

In retrospect, I can clearly see Scott Pilgrim was a really hard sell. You have to contend with the Michael Cera 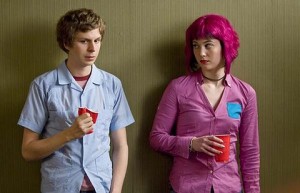 backlash—he’s become ubiquitous and the public at large is tired of his schtick. Scott Pilgrim is based on a graphic novel with a devoted but cult following (granted, sales are skyrocketing around the film). And the story isn’t any one thing. My friend BW pointed out that it isn’t a romantic comedy but it isn’t an action movie, and while it is very funny, it isn’t exactly a comedy, either. Audiences abhor a confused message. And finally, you have the characters themselves. They aren’t exactly likeable. The trailer and ads make Scott seem like the hipstery, loveable loser Cera is famous for playing, but really he’s kind of a prick and maybe a bit of a perv. He cheats on his underage schoolgirl girlfriend and he has his own bitter exes behind him.

And Ramona Flowers (Mary Elizabeth Winstead, Death Proof), the object of Scott’s embattled affections, is a very difficult character to create sympathy for. She’s not emotionally available, utilizing the same deadpan and sarcastic wit as Cera to mask the softer feelings. As an emotionally unavailable female myself, I was fine with this, but I could see fellow theatergoers were not responding to Ramona. Everyone was much more down with Knives (newcomer Ellen Wong), Scott’s high school girlfriend. There was palpable disappointment when Scott chose Ramona over Knives at the end (oops, spoiler). And then there’s the “S” word. The girl sitting in my row said it as we left the theater.

It’s true, Ramona has a past. She has exes—she kept correcting Scott

It’s a shame Scott Pilgrim is such a hard sell because it’s a damn good movie. Director and co-writer Edgar Wright

(Shaun of the Dead, Hot Fuzz) is a very talented guy who still has places to go in his career. He has a fresh eye—his movies don’t quite look like anyone else’s. It’s refreshing to go to the theater and see something original and fun. Wright also deserves a round of applause for controlling his huge cast. Cera and Winstead are the anchors, but Kieran Culkin (Paper Man, Igby Goes Down) steals the show as Scott’s roommate and BFF. Lost in the shuffle is Anna Kendrick (Up in the Air, The Twilight Saga), who vanishes about halfway through the film despite once again turning nothing into something as Scott’s gossip-queen sister.

But truly, Scott Pilgrim belongs to the bit players. Wong is terrific as hyper Knives and Alison Pill (Pillars of the Earth) and Aubrey Plaza (Parks & Recreation, Funny People) are sharp in small roles. Of the exes, Jason Schwartzman has the best part, but Chris Evans and Brandon Routh are funnier. Routh continues to strike me as too plastic, but that quality was played for effect as the “upgraded” version of Scott. And Evans, though his role amounts to a glorified cameo, was genuinely funny playing a caricature of himself, the B action movie star.

Also deserving massive credit are the film’s editors, Jonathan Amos and Paul Machliss. Scott Pilgrim’s many fight scenes were each a masterpiece of editing. If you’ve ever wondered what a live-action videogame fight would look like, Scott Pilgrim is the answer. The film drags a little two-thirds of the way through, but once Scott faces off with uber-ex Gideon it picks right back up and finishes up-tempo.

Scott Pilgrim is not what you expect. It’s not what the marketing made you expect. It’s better than that. Funnier, sweeter, with eye-popping visuals and characters who feel so flawed and real they could be your own brother, sister, or friend. Cera is more enjoyable than I’ve ever seen him before and some of the bit players are a true joy to watch. Culkin alone is worth the price of admission. Scott Pilgrim kind of tanked. Originality took a hit this weekend at the box office. And that’s the real evil.