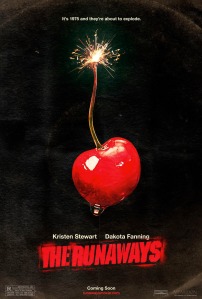 This movie is going to be big. I pegged it for a sleeper hit, especially if it debuted strong at Sundance, and thought if the reviews were good enough it could even break out into the mainstream. The Runaways premiered at Sundance last weekend to overwhelmingly positive reviews. And after seeing it for myself this week, I have to say–

This movie is going to be BIG.

The Runaways recounts the rise and fall of the 1970’s all-girl punk band of the same name, which introduced Joan Jett, Cherie Currie, and Lita Ford to the music world when they were mere teenagers. But that was the point of The Runaways–jailbait rock. Producer and music industry Svengali Kim Fowley assembled the band and sold them as sex kittens who happened to be talented musicians. Written and directed by Floria Sigismondi (a newcomer to feature film but a veteran of music videos and commercials), The Runaways has all the sex, drugs, and rock ’n roll you could want from a ’70’s-era rock pic. I’ll confess to being predisposed to like this movie. I’m a fan of Joan Jett, of The Runaways, and of Kristen Stewart, who plays Jett in the film. But that doesn’t mean I’m blind. Some elements of The Runaways worked and some didn’t.

The acting makes this movie. Too often in a music movie the soundtrack takes first precedence, but here the acting is the center of the movie. The three central performances–Stewart as Jett, Dakota Fanning as lead singer Cherie Currie, and Michael Shannon (Revolutionary Road) as Fowley–are the lynch pin for the whole film. It’s easy, especially for a first-time director like Sigismondi, to get overwhelmed by the era or the music, but she successfully puts these three characters first and everything else takes a backseat. Shannon walks away with the entire film. He stomps all over everyone else, stealing scenes and chewing up scenery. Crazy costumes, over the top soliloquies–Fowley is THE role in the movie and Shannon makes the most of it. Check him out in this clip, looking like a cross between Frankenstein and David Bowie:

The great debate of this film will be whose performance do you prefer, Stewart or Fanning’s? Dumb question–you need both young actresses to turn in good performances in order for it to work. And they both deliver. Stewart gives a ferocious, fearless performance as Jett. When she looks into the camera and says, “I don’t give a fuck,” you believe her. Stewart’s Jett is no naïve waif. When their sound check is shut down by the headlining band, Rush, Jett retaliates by urinating on their guitars. She does drugs (at one point Jett snorts so much coke that her face is covered in powder), makes out with chicks, and thrashes her guitar with wild abandon. Clearly Stewart gave ZERO thought to how this role would be received by her tween-aged fanbase from the Twilight franchise. As Jett says, she doesn’t give a fuck. Stewart’s best scenes are with Shannon as their Jett and Fowley play off each other. Whether it’s writing songs like “Cherry Bomb” on the fly or engaging in screaming matches, Stewart and Shannon are perfect foils who bring most of the snap to the movie.

As for Fanning, her performance is the best I’ve seen from her in years. The precocious child star is growing up to be a truly gifted actress. If Stewart’s Jett is the Queen Mother of Punk then Fanning’s Currie is the original Punk Rock Princess. In turns a sweet-faced Valley Girl and Glamazon rocker in towering platforms, Currie is by this much [ ] the lead role in the movie. We see more of Currie’s home life than Jett’s, as Currie leaves her twin sister, Marie (newcomer Riley Keough), to deal with their alcoholic father. We also see Currie’s mother, played with force by Tatum O’Neal, abandoning her daughters to raise themselves as she moves to Indonesia. “You’re welcome to come,” she says, oblivious to the destruction she’s wrecking on her children’s lives. Currie soon bails for life on the road with The Runaways. Fanning goes for a vulnerable, “little girl lost” vibe that mostly works for Currie, especially as she is overwhelmed by a combination of drugs, exhaustion, and exploitation. 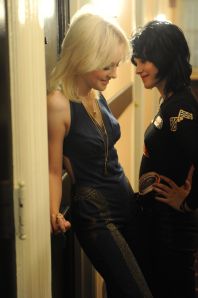 The scenes Fanning and Stewart share are very good. In turns giggly BFFs and competitive bandmates, their chemistry grounds the movie. It’s been the big hype of the film–the kissing scene between Stewart and Fanning. But in context of the movie it comes and goes, another moment in a complicated relationship. They make out, the off-camera suggestion is that they have a night together, and then Fanning is standing on a table in Currie’s iconic corset and fishnets, saying, “I’m going to wear this,” daring Jett to tell her no. Their chemistry sparks most when they’re fighting, as when Jett snarls, “Sell the music, not your crotch,” at Currie as Jett throws a magazine full of soft-core photos of Currie at her. The Runaways works best when it’s splitting time evenly between Stewart and Fanning.

As for the rest of the cast, Keough and O’Neal stand out the most, but Hannah Marks (Weeds) is solid as Jett’s supportive best friend/girlfriend Tammy. Scout Taylor-Compton (Rob Zombie’s Halloween) and Stella Maeve (Gossip Girl) don’t have much to do as Lita Ford and Sandy West, respectively, but Compton nails the physicality of Ford playing a guitar. Alia Shawkat (Arrested Development) is totally wasted. I seriously don’t know why they bothered casting an actress of Shawkat’s ability for the role of Robin Robins, the generic bassist. (The producers couldn’t secure the life rights for The Runaways’ first bassist, Jackie Fox, so they created a composite called Robin.) Shawkat had no lines and was little more than background scenery. Ford and West were also underrepresented, although Compton gets a nice scene toward the end, having a blow out with Jett in the recording studio. Which leads us to…

I am always nervous of a first-time director. I was especially nervous for Floria Sigismondi as this is not only her first feature film, but the first time she wrote a script, too. Though it is her first feature, Sigismondi has had a lengthy career as a music video director, helming videos for Marilyn Manson, The White Stripes, Sigur Ros, Incubus, and The Cure. She brings a highly developed visual style to The Runaways which is especially suited to a ’70’s era look. There’s a grainy quality to the film and her trademark zoom-in, zoom-out cuts echo the sort of filmmaking that was considered so raw and edgy in the ’70’s. The concert footage is especially strong, looking as though it came from the actual shows The Runaways performed over thirty years ago. The production/artistic design are incredible. 1970’s Los Angeles is represented in all its punky, grimy glory without ever crossing into kitsch or dewy-eyed nostalgia. It’s so easy for that era to come across as accidentally cheesy, but Sigismondi and her crew keep it gritty, dirty, and real.

Where Sigismondi stumbles a bit is with pacing and editing problems. Some scenes linger a bit too long, others are redundant. For instance, while on tour in Japan there’s a shot of 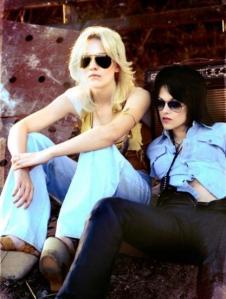 Currie standing, exhausted, in her shower. It cuts immediately to Currie standing, exhausted, in an elevator. The shower scene accomplishes nothing, especially since the elevator scene climaxes with Currie collapsing once the doors open. Also, the camera tends to linger too long on Fanning’s face. Her performance is somewhat hindered by this, giving it a vacuity that I don’t think is really there. It’s just a wee bit too much staring off into space. The scene showing Currie preparing for her audition for The Runaways could be cut in half–I don’t need two minutes of Fanning swirling about her room, singing along with “Fever”. That’s a problem throughout the film. Fanning’s scenes simply go too long, creating flat moments in her performance that could easily be fixed with some minor re-tooling. The movie works best when it’s clipping along between Jett and Currie, and it would benefit from trimming down Fanning’s performance a bit to even it out with Stewart’s.  Things slow down and get draggy in the middle as the story focuses in on Currie, but then it picks back up at the end when Sigismondi goes back to cutting between Currie and Jett dealing with the band’s breakup.

I would also like to request that while cleaning up the pacing (which Sigismondi has indicated she will do before theatrical release), that some dates are added throughout the film. It opens with a title card stating, “1975”, but then it seems like everything comes together and falls apart within a year. A common problem in biopics, but one easily fixed. Just throw up a “1977” when The Runaways land in Japan and a “1982” when Jett appears, now a solo artist, promoting her break-out single “I Love Rock ’n Roll” on a radio show. Now we have some perspective.

Of course it’s awesome. Sigismondi has confirmed the tracks the actresses recorded for the movie will be included, as well as original recordings by The Runaways. The only song we 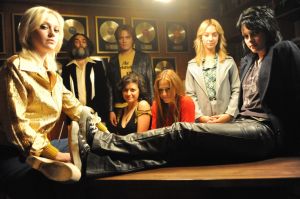 see performed fully in the movie is “Cherry Bomb”, but there are also clips of “Queens of Noise”, “Dead End Justice”, and Stewart singing “Playing with Fire”. Stewart and Fanning nail their vocals. Though Fanning lacks Currie’s alto growl, she puts all the force and fervor into her singing you could want. And Stewart is uncanny as Jett. Though she doesn’t sing the track, Stewart delivers chills when she picks up a white Gibson Melody Maker and begins jamming on “I Love Rock ’n Roll”, the song and the guitar that would become Jett’s signatures. There are nods to Runaways influences Suzi Quatro and David Bowie, there’s a smidge of the Sex Pistols, but The Ramones are oddly absent. Sigismondi’s husband, Living Things frontman Lillian Berlin, was cast as Joey Ramone, but his scene must have been left on the cutting room floor.

Overall this is a solid, if predictable, rock biopic that benefits from three fantastic performances. Shannon and Stewart are the standouts, and with a little bit of cleaning up in the editing room, Fanning’s performance would lose that maybe-accidental-vapidity that’s flattening it right now. It’s a promising start by a first-time director, and a little disappointing in its failure to maintain the wild energy of the first thirty minutes (please cut out Currie constantly staring off into space!). Still, The Runaways is an entertaining love letter to ’70’s punk and a band that broke the gender barrier for future generations.

UPDATE: I totally forgot before, but there was one scene I HATED. After The Runaways broke up there’s a scene of Jett sitting in her tub, writing new music. That’s fine–what I hated was the transition. Jett sinks below the water and it cuts to a woman floating in deep water, like some drowning dream sequence. It makes NO SENSE, has nothing to do with ANYTHING, and looks like NO OTHER transition in the entire film. I LOATHED it, and I really hope Sigismondi cuts it out before theatrical release. It was the one completely cheesy moment in the movie.

7 thoughts on “A spoilery review of The Runaways”