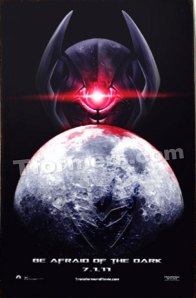 There’s a string of words you probably never thought to see together.

A few weeks ago I got a sneak peek at twenty minutes of Transformers: Dark of the Moon, the third entry into Michael Bay’s increasingly loud franchise. At that time, I said that, based on twenty minutes from the climactic “destruction of Chicago” scene, that I thought TF3 would be “big and dumb and loud”. After seeing it over the weekend, it is in fact big and dumb and loud, with an emphasis on dumb. What’s most interesting about TF3, though, isn’t the plot (because there almost isn’t one), or the characters (because they’re little more than cardboard stand-ups of what Bay thinks real people are like), or even the visual effects (because they’re as elaborate and over the top as one expects in a Michael Bay movie). No, what has evolved from TF3 is an interesting discussion about Michael Bay and his status as an auteur. END_OF_DOCUMENT_TOKEN_TO_BE_REPLACED