Here’s a case study of how everything can wrong for a movie that should have zero problems hitting theaters. 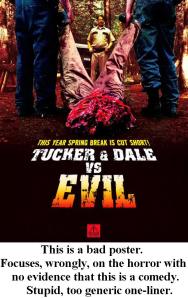 Tucker and Dale vs. Evil premiered at Sundance 2010 to overwhelming praise. When I say “overwhelming praise” I don’t mean that most people liked it or pretty much everyone thought it was good. I mean I have never heard a bad word said about this movie. It has a perfect 100% on Rotten Tomatoes. When I say “overwhelming praise” I mean exactly that. It’s a tsunami of love for this low-budget horror parody. So why did it take 18 months to reach an audience? Well, to be fair, anything that comes out within 2 years of being lensed isn’t that a big of a problem. There are a lot of decisions that go into when a movie is released—something can be in the can and ready to go but marketing says it’ll float better in six months so you wait. Or, if it’s a festival prospect and it’s finished after September, it’s waiting until the festival season begins again the following year. So partly the delay isn’t a huge thing because 18 months from filming to viewing isn’t too bad. END_OF_DOCUMENT_TOKEN_TO_BE_REPLACED