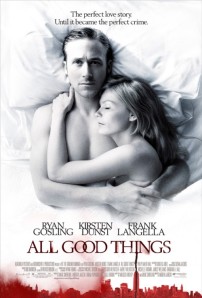 Ryan Gosling’s latest, costarring Kirsten Dunst and Frank Langella, isn’t really good. It kills me to say that. I love Gosling. I love him so much not even his recent alleged dalliance with Blake F*cking Lively can kill my quiver for Gosling. You KNOW it hurts me to judge Gosling and find him less than. But there’s no getting around it. All Good Things isn’t good. And it wasn’t for lack of trying.

Dunst and Gosling both give acceptably good performances and Langella is as good as he always is as the emotionally distant father, Sanford, of David Marks (Gosling) a New York real estate heir who flounders through life. Sanford wants David to 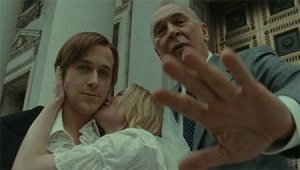 shape up and join the family real estate empire but David would rather move to Vermont with his pretty young wife, Katie (Dunst), and run a health food store. Langella does a great job combining Sanford’s seemingly real liking of Katie while simultaneously belittling her as “not one of them”—i.e., wealthy like the Marks family. Dunst plays Katie as a free spirit but it feels kind of flat, like Dunst is just treading water. It gets a bit better as Katie sinks into emotional despair as her marriage to David falls apart, but it’s still a remote, inaccessible performance. We just never care much about Katie, even though we know she’s struggling and we should have sympathy for her. Those actual emotions never actualize, though. END_OF_DOCUMENT_TOKEN_TO_BE_REPLACED