That show felt really, really long, right? In actual running time it was average (around three and a half hours) but it felt like it took all year to watch. I’m putting it down to the horrible direction. That was a really, truly, terribly directed telecast. No sense of rhythm or pace and not nearly enough cutaways to the audience to make it worth our time. We watch for the cutaways as much for anything else. We want to see George Clooney’s face when someone makes a joke about his younger girlfriends. We want to see Joaquin Phoenix bitchfacing the host to death when he hopes Phoenix is “on his meds”. I, personally, wanted to see some cutaways to Academy bigwigs when Robert Downey, Jr., plainly annoyed, snapped, “Biggest movie of the year, but only got one Oscar nomination”.

END_OF_DOCUMENT_TOKEN_TO_BE_REPLACED

The last couple years I’ve actually done fairly well with my handicapping, but this year I am not at all confident in my picks. Too many races are too close, but there’s also a wide disparity between the movies that will win versus the ones that should win. I enjoyed Argo, I like Ben Affleck as a filmmaker and I think he’s developing into one of the most consistent and entertaining American directors, but Argo was not the best movie of 2012. It won’t even go down as the best movie of Affleck’s career. But the politics, they matter this year, even more than usual. With no clear masterpiece to lead the field and critical tastes too evenly spread over too many movies (primarily Argo, Lincoln and Life of Pi) and with Harvey Weinstein shoving Silver Linings Playbook down our throats like it’s something other than a rote, if well-acted, romantic comedy, the Oscar race turned into a dog fight. But it’s almost over. The Oscars are on Sunday, so it’s time for final predictions. END_OF_DOCUMENT_TOKEN_TO_BE_REPLACED

If you need a reminder at just how far Ben Affleck fell down the Hollywood ladder, look no further than his exclusion from the Best Director category at the Oscars. Sure, he’s on the Best Picture list as a producer, alongside George Clooney, but his solo effort was ignored in favor of a first-time director (Benh Zeitlin) whose movie I liked a great deal less than Argo. It’s gotta sting, Ben, but don’t worry. Your day will come. Just not yet. You’re not done paying for Bennifer or Reindeer Games yet (and you still owe me $10 for sitting through that shit pile). END_OF_DOCUMENT_TOKEN_TO_BE_REPLACED

I kept lamenting throughout the night that no one was cutting to Benedict Cumberbatch during the Oscars, but it turns out, he wasn’t there. He was at Elton John’s viewing party, which lets the telecast director off the hook—though not for also failing to keep a camera on Colin Firth as he walked out on stage—but then it leads me to wonder why a man who was in two nominated films, one of them a Best Picture candidate, and who is one of the hottest things happening in town right now, wasn’t there. Seating at the Kodak Theater is dicey—it’s not as big as a venue that hosts the Oscars should be and tickets are competitive even for nominated parties—but you would think someone could make room for Cumberbatch. Anywho. END_OF_DOCUMENT_TOKEN_TO_BE_REPLACED 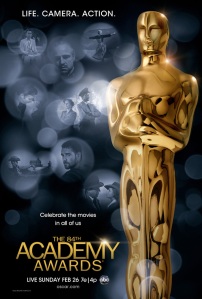 I called this the “worst Oscar roster in recent memory” when the nominations came out a month ago. I stand by that. In the time since then, I’ve come to realize that in almost every category, the best movie/person wasn’t nominated. In a lot of categories, there are 3+ movies/people that didn’t get nominated. We’re not picking the best of anything this year. We’re picking runners-up and honorable mentions. 2012 might as well be called “the year of the also-rans”. This is definitely a year that we’ll have to revisit with the Ethels in five years. END_OF_DOCUMENT_TOKEN_TO_BE_REPLACED

2011 was divisive. We knew that. There’s been a lack of consensus about what was good and what was bad that’s so strongly marked many called 2011 a shit year for films. That’s not true, but it was a year that failed to produce a masterpiece (um, most years fail to produce masterpieces). 2011 had so many films that appealed to wildly different tastes that everyone knew the Oscar nominations were going to be a mess. The last couple of months have seen plenty of bitching about The Descendants—I loved it but many think it’s overrated—and The Artist—many love it but I think it’s overrated—and Hugo and War Horse come from venerable directors but neither are either’s best work (and neither will matter in five years). There was also an abundance of excellent acting in 2011, which guaranteed that each of the four acting categories would feature prominent snubs. END_OF_DOCUMENT_TOKEN_TO_BE_REPLACED

Really, “fixing” the Academy Awards is very, very simple. But every year, the Academy turns this process into Mola Ram’s Temple of Doom ritual killing. When we say, “Make the Oscars entertaining” the Academy hears, “Make the Oscars an eleven-hour montage punctuated by moments of self-congratulation and banal banter while shoe-horning in bits meant to communicate hip youthfulness but really only show how un-hip and not-youthful the Academy actually is”. END_OF_DOCUMENT_TOKEN_TO_BE_REPLACED