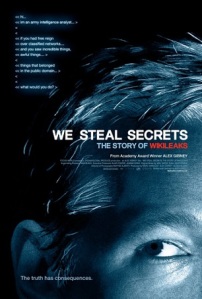 Alex Gibney, the documentarian behind such films as Taxi to the Dark Side and Enron: The Smartest Guys in the Room, is a phenomenal storyteller. That’s always been true about him, but it’s especially apparent in his new documentary, We Steal Secrets: The Story of WikiLeaks (available On Demand now). Gibney neatly lays out the rise and fall of WikiLeaks and its charismatic and/or creepy founder cum figurehead, Australian hacker Julian Assange, but because he didn’t interview Assange directly (he wanted one million dollars from Gibney for an interview), Gibney relies more than ever on the elements of narrative to tell the WikiLeaks story. The end result is a documentary that is at times uneven but is always completely engrossing and fascinating, and surprisingly sensitive. END_OF_DOCUMENT_TOKEN_TO_BE_REPLACED