Marvel’s Agent Carter ended last night, without confirmation of a second series, so for now this is it for Peggy Carter and the SSR. In many respects, it was a satisfactory ending. Peggy comes to terms with the loss of Steve Rogers, Howard Stark deals with his own destructive nature and legacy, and the SSR accepts Peggy as one of their own—though the accolades for the resolution of the Howard Stark situation goes to Agent Thompson, not Peggy. But as Peggy says, she doesn’t need public recognition—she knows her value. All she’s wanted is to be allowed to do the work, and that is what she gained during her first year with the post-war SSR: The ability to be an effective member of a team.

There were also neat parallels to the Marvel movies, which is something Agent Carter has, for the most part, done very well. Howard’s storyline all season about the inherently destructive nature of his genius echoes Tony Stark’s arc throughout the MCU, especially the upcoming Avengers: Age of Ultron. After that movie comes out, it might be worth revisiting this last episode and Howard’s words about legacy and destruction. And Captain America’s specter looms large once again, but this time it’s as a fading ghost. Howard and Peggy let Steve Rogers go, and in so doing abandon him to the canonization of cheesy radio shows and the hero-worship of a grateful public. The scene in which a senator congratulates Thompson is purposefully reminiscent of the senator who once congratulated Steve—you could feel that senator thinking that this handsome blonde agent would be his own Captain America.

But there was one area in which Agent Carter dropped the ball—despite setting up plenty of foreshadowing, the show did not end up teasing the Winter Soldier. The biggest problem with Marvel’s TV efforts (to date) has been their unwillingness to let the TV shows tie into the movies in big and impactful ways. Agents of SHIELD has loosened up on that regard, letting the show build out the mythology of the Inhumans, and it has improved that show a great deal. But though Agent Carter introduced the Red Room, Hydra’s many offshoots in Europe, and the potential for Stark tech to wander off and land in the wrong hands, none of that led to anything larger.

Leviathan turned out to be nothing more than one man’s need for revenge against Howard Stark. The threads of the Battle of Finnau, Howard’s mysterious nerve gas, and a man devastated by the horror Howard accidentally wrought are fine, in and of themselves. But Leviathan got a great deal of buildup that just felt BIGGER than a simple revenge plot. I appreciate the writers not taking a second series for granted and tying up the loose ends, but we know that the Winter Soldier is in the natal stage, and we also know it will be years before he’s unleashed on the world. We don’t expect to see him, so it’s not like they have to create a big cliffhanger or anything. But they could easily have planted some seeds that make it clear that Hydra is working on it. 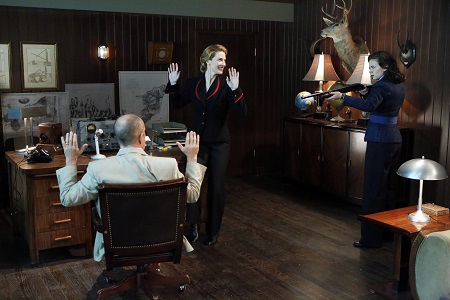 Why solve Leviathan? Capture Dr. Ivchenko, sure, tie that up, but make it clear that he was just one part of Leviathan, that there is a bigger plan the SSR still hasn’t unraveled. And when Howard looks at Sousa’s prosthetic leg and says, “I can help with that,” follow up by showing Howard realizing that a prototype limb, or schematics for one, are gone from his stolen inventions. (The designers on Captain America: The Winter Soldier very deliberately wanted the Winter Soldier’s metal arm to look like Stark tech, but Agent Carter did absolutely nothing with that.) And that final vial of Steve Rogers’s magic supersoldier blood? After all the shell games, Peggy ends up pouring it into the river. WHAT?! Either lock that sh*t up in the SSR, where we can assume that Hydra one day steals it, or hide it somewhere it can be useful to Steve in the future. What a wasted opportunity.

But then, that’s the issue that plagues the TV shows. By not letting them directly impact the movies, they’re hobbled by these go-nowhere, ultimately uninteresting plots. Agent Carter was an enjoyable show, with a great period aesthetic and fun, snappy action and dialogue. Hayley Atwell has turned Peggy Carter into a worthy superheroine in her own right, and James D’Arcy is something of a revelation as the human version of Jarvis. It just would have been nice if Agent Carter felt more directly relevant to the events that would end up undoing Peggy Carter’s life work seventy years later.

Speaking of dumb decisions—whose idea was it to put Dr. Ivchenko in a prison cell with Arnim Zola?! SHIELD agents: Terrible at their jobs since 1946.