Welcome back to another installment of the Ethel Awards, in which I fix Oscar’s past mistakes by sorting out egregious, Academy-committed errors. This year we’re tackling the 78th Academy Awards, which were held in 2006 to honor movies from 2005. AKA the year Crash won Best Picture over Brokeback Mountain, a decision which looked ridiculous by the end of that night, let alone eight years later. (This is why I hope American Hustle doesn’t win Best Picture. It was perfectly enjoyable but entirely forgettable and no one will remember it five seconds after the Oscars end.) Usual Ethel rules apply—the year in question must be at least five years past and wherever possible, I’ve chosen the more deserving winner from the available pool of nominees.

I am skipping a few categories this year, though, including the shorts, as per usual, and Best Makeup (Chronicles of Narnia) and Best Visual Effects (King Kong). Those two awards actually seem pretty well placed. I remember several people having some good practical makeup/prosthetics in Narnia, particularly Tilda Swinton and James McAvoy, and while motion capture is a pointless waste of time, King Kong had a lot of great visuals. (Too bad about the rest of the movie.) I also added in some new categories this year, including Best Animated Feature, which wasn’t a thing in the previous Ethels.

And now for how the 78th Academy Awards SHOULD have gone down.

Oscar: Memoirs of a Geisha

Does anyone remember anything about Memoirs of a Geisha? Anyone? Bueller? I suspect the Academy was seduced by Eastern exoticism combined with World War II costumes. Pride & Prejudice, meanwhile, recreated the Regency period in all its shit-stained, sweaty splendor. This is not Downton Abbey, where everything is pristine and gorgeous, even the servants as they go about their servanting. The Bennett family, impoverished by Regency standards, is seen recycling clothing throughout the film, and even the wealthier characters have mud on their boots. That’s probably what did the costume award in—that touch of authenticity meant that they sacrificed “period pretty” for “no, this is more like what it really was”. Ditto for the art direction award. The most magnificent set pieces came from actual, preserved great estates like Chatsworth and Basildon Park, but that doesn’t account for the more lived-in spaces like the Bennett family farm and Charlotte Collins’ sitting room. Pride & Prejudice was a seamless combination of the preserved and the recreated, but they didn’t get any credit for it.

This is somewhat personal preference. Gustavo Santaollala’s score for Brokeback Mountain was perfectly lovely, but I don’t remember it is as clearly as I do Dario Marianelli’s score for Pride & Prejudice. This is why the Oscars need a five-year delay, to let things sink in and see what stands up over time versus what fades away.

Entirely personal preference. “It’s Hard Out There for a Pimp” is a dumb song.

Everyone talks about Brokeback Mountain getting screwed this year, but Munich really got screwed, too. Arguably Stephen Spielberg’s best film, it’s exemplary in a lot of categories but the sound editing was stellar and it wasn’t even nominated.

Correcting within the category simply because the mix on Walk the Line HAD to be flawless in order to incorporate the singing elements and IT WAS. Yet further proof that 99% of the Academy doesn’t actually understand the science of sound in cinema, and the two sound categories basically amount to “Loudest Movie of the Year”. 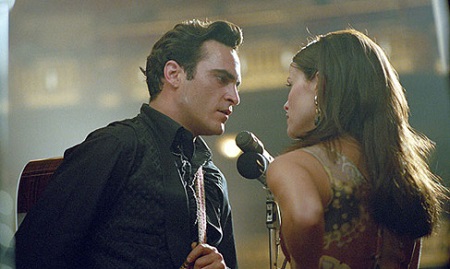 Munich editor Michael Kahn (Spielberg’s go-to editor) was nominated but he lost to Crash’s Hughes Winborne because apparently the entire Academy was under some kind of spell that year that convinced them Crash was a good movie.

Oscar: Memoirs of a Geisha

Everyone hated The New World, Terrence Malick’s long, slow, let’s-stare-at-this-puddle-for-five-minutes-and-reflect-on-the-nature-of-man’s-destructiveness meditation as told through the story of John Smith, Pocahontas and Jamestown. Even by Malickian standards it is a difficult film to get through. It’s dense, non-linear, and the dialogue is largely in voice over and has little to do with what’s happening on screen in any given moment. But it is also a GORGEOUS film. Cinematographer Emanuel Lubezki created some absolutely stunning nature shots—stuff that outdoes the best nature documentaries, even. Again, I can’t remember anything about Memoirs of a Geisha, but damned if I don’t recall every bit of that puddle in The New World.

Oscar: March of the Penguins

March of the Penguins was cute and all, but Murderball is a genuinely interesting, inspiring documentary. It’s about wheelchair rugby, and the quadriplegics who play it, and it’s awesome. It’s informative and engaging and also hella fun to watch, which isn’t often the case in this category.

Oscar: Wallace & Gromit: The Curse of the Were-Rabbit

Slightly painful, because I love Wallace & Gromit, but The Curse of the Were-Rabbit is not their best movie and Howl’s Moving Castle is one of the best films from a master animator and filmmaker, Hayao Miyazaki. In the wider film community, not enough people appreciate Miyazaki.

You could make an argument for France’s Joyeux Noel and I wouldn’t argue, but South Africa’s Tsotsi holds up reasonably well.

No argument. Stellar script, especially since Annie Proulx’s original work is a short story and the movie never feels stretched out or made of filler.

Again with the Crash spell. That script is a joke while Clooney and Heslov crafted a tight, compelling story without engaging in post-modern histrionics. They mimed the straightforward, just-the-facts approach of their subject, newsman Edward R. Murrow, and told a story that both feels authentic to the period and resonates in modern times.

I’m in the tank for Jake G, but seriously, he was better than Clooney. This time, in this category, he deserved it more. He got totally overshadowed by Heath Ledger’s performance in Brokeback Mountain, but Gyllenhaal was every bit as good, he just wasn’t as much of a revelation. But Ledger was remaking himself from a teen heartthrob and we already knew Jake G had chops.

I’m a huge fan of Weisz, but I don’t remember much about her performance. All I really retain from The Constant Gardner was that her character died horrifically, but that doesn’t have anything to do with her performance. Amy Adams, however, was flat-out terrific in Junebug and got robbed because back then, no one knew who she was. If she did that part today, she’d win in a heartbeat.

It feels dirty to take this one away from Hoffman given…everything…but this wasn’t his best performance (though it was very good, because Hoffman was always the best part of everything he was in), and I can think of like, three other movies where he deserved an Oscar more (not least of which is Doubt). Eric Bana, on the other hand, gave the performance of his career in a role that still sticks with me, years later. I still remember bits and pieces from Munich occasionally and it always involves his character and the moral rot eating away at him.

I can feel you wanting to yell at me, but give it a second…