For months now we’ve known about South Korean director Bong Joon-ho’s ongoing negotiations with Harvey Weinstein over the final cut of his highly anticipated film, Snowpiercer. You can revisit the saga here, here and here. Now, in a new interview with Twitch Film, Bong discusses Snowpiercer and the delicate dance to arrive at a satisfactory cut for North American audiences (because the obvious answer to all of this—just release the film as-is—is apparently too much to ask for).

First, let’s all take a moment and admire how patient and polite Bong is about this mess. There’s a thread of disbelief in his words (“this is the very first time I’ve experienced this kind of situation”), but he is careful not to sound accusatory or upset, taking pains to compliment Weinstein and the people at TWC. It’s very diplomatic. I don’t think I could be so even-keeled, but Bong understands the collaborative nature of film and sounds like he really is trying to accommodate Weinstein without destroying his film.

But the “American edit” already exists—Bong reveals that it was test-screened over the summer in New Jersey. And guess what? Snowpiercer less twenty minutes didn’t go over well. They also screened Bong’s original cut in Los Angeles and it did much better than Weinstein’s moo-cow version. Is it because LA audiences are savvier than those in Jersey? Not at all—LA audiences aren’t actually that savvy, compared to cities like Austin, Chicago, Seattle and Boston (which is why you don’t find a lot of focus grouping going on in those cities). It’s just because Snowpiercer, as Bong made it, is FINE. It doesn’t need fixing.

Bong also dismisses the theories that the cuts center on violence and the dark tone of the film, attributing the desired changes solely to issues of pace and overall running time. I’m sure that’s part of it, but at only two hours, it’s not like Snowpiercer is a long movie. You can’t cut out twenty minutes without significantly impacting the tone because you will end up removing key character and plot details, and yes, curtailing the violence. Pace might be the big issue, but these other factors are in play as well. But Bong is careful to keep the conversation away from the idea that Weinstein thinks Americans are too dumb for this movie, which is what started this kerfuffle in the first place.

There are two problems revealed in the subtext of Bong’s interview. The first is the issue of the length of the movie. It’s just two hours. Given that we’ve seen blockbuster after blockbuster clocking in at well over two hours all year, it’s not like audiences can’t sit through a two hour movie. And Snowpiercer’s two hours are busy—this is not a badly paced movie. There are key character reveals interspersed with fantastic action sequences and as I just said, there is simply no way to trim this movie that is not going to reduce those character elements. This isn’t like The Grandmaster where there were long, introspective takes that could be trimmed down or removed all together in order to tighten up the pace. (Weinstein’s editing of that movie lead to a perfectly serviceable Kung Fu movie, if one that is less than the original, more lyrical cut.) There’s no navel-gazing in Snowpiercer.

The second problem is one that Bong only vaguely alludes to: his “strangeness” as a director. I would like someone to follow up with Bong on this—is the problem that he simply does not have the material to go into a workable edit? Most directors work the same way: You film a scene from vantage A, then from vantage B (usually these are medium-to-close shots of the primary actors in a scene), then from vantage C (a “master” shot with all actors in view, sometimes this is also the establishing shot of the scene so that we know where everything is in relation to one another). This is a director’s coverage for that scene, and the editor pieces together the best takes from the best angles to make the best version of the scene. 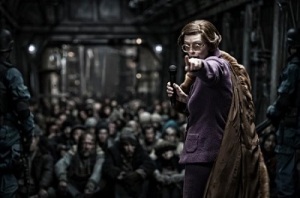 The problem: Bong doesn’t work like that at all. He plans his takes so meticulously in pre-production that by the time he gets to principal photography, he knows exactly which angles he wants and only films what he needs. So instead of having multiple vantages in a take, he might only have one angle available. There isn’t going to be a lot of unused coverage that could then be shuffled into a new edit to cover holes left by cutting one-sixth of the movie. So is this the crux of the issue? Harvey wants to make a “speedier” cut of the film but the only way to accomplish that is by removing makes the movie special and interesting. I can understand that throwing even an experienced producer like Harvey Weinstein. It’s not that Bong is being difficult; it’s that he literally does not have what Harvey needs. I don’t imagine that’s often the case in Harvey Weinstein’s life.

There is still the easy out in this whole mess: Do whatever you’re going to do to the US version of Snowpiercer, Harvey, and put the original cut on demand.