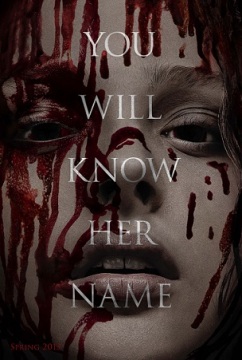 The remake of Stephen King’s horror classic, Carrie, isn’t a great film, but it is a big upgrade from the 1976 original, directed by Brian De Palma. Despite Sissy Spacek’s performance, the original Carrie is a schlocky bastion of unintentional comedy with a rather repugnant male eroticism injected into it. Yes, the prom scene is exciting, but everything that leads up to it is janky as shit and it hasn’t aged well. Piper Laurie (The Hustler) is a good actress who was horrible in that movie—there’s a reason “they’re all going to laugh at you” is so often parodied: it’s an atrocious, unintentionally hilarious line reading. So while Chloe Grace Moretz’s portrayal of Carrie White does not top Spacek’s—though it has its moments, particularly as Carrie’s confidence and rage grow in equal proportion—Julianne Moore’s work as creepy Jesus-freak mom Margaret is a huge improvement. There is nothing laughable about Moore’s Margaret. She’s abusive and borderline psychotic and it’s deeply unsettling.

The value of Carrie has never been in the particular quality of the film, though it is nice to see Carrie updated for the Facebook generation and profiting from modern VFX, it’s in the feminist implications of the story. Having read King’s book, I don’t think he was aiming for Carrie to be a feminist treatise on female power defined by women, but it is that nonetheless. This modern update of the 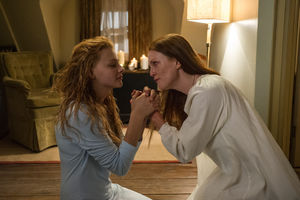 film benefits from a female director, Kimberly Peirce (Boys Don’t Cry), who relegates men even further onto the sidelines than the original film, emphasizing at key points masculine powerlessness in the face of female outrage. In one scene we see Coach Desjardin (Judy Greer) taking school bully Chris (Portia Doubleday) to task as the principal and Chris’s father look on. The two men attempt to mediate, but they are bumbling and uncaring, respectively, and the result is that Desjardin unwittingly sets into motion the chain of events that will result in the prom night from hell.

Carrie is a story defined entirely by women. It’s about exclusively feminine problems, namely menstruation and birth but also male objectification, and, in Peirce’s version, it deals with those problems without catering to the male gaze. Much of the horror genre is taken up with films depicting female victimization for (pleasurable) male consumption, but under Peirce’s guidance Carrie is uniquely unconcerned with male viewing. The story of Carrie White’s entrance into womanhood via a violent bullying event echoes her entrance into the world via violent birth—Margaret appears to be one of those “I didn’t know I was pregnant” people—and the remainder of Carrie’s short life is dedicated to violence, both emotional and physical. But Carrie resists victimization with the discovery and nurturing of a latent telekinetic power which only emerges with her first period. 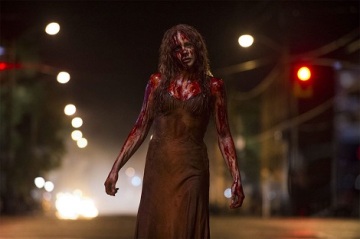 Telekinesis is the cinematic stand-in for Carrie’s seizure of her identity from the impositions of others. Margaret defines Carrie by her pseudo-religious worldview which, as Carrie points out, derives not from the Bible but from the kind of patriarchal sermonizing that was used for hundreds of years to justify female disenfranchisement. Carrie rejects the notion that her value as a woman is tied to purity or any other external construct, determining for herself what she wants to do and setting her own rules for the interaction. When she uses her telekinesis to silence her mother’s proselytizing, it is a literal assertion of her will and, in that moment, separates her identity from the false construct her mother attempted to foist on her. 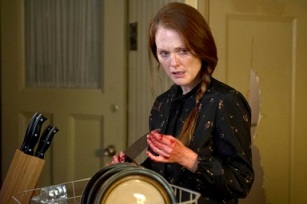 The push-pull between societal expectations for female behavior and actual female behavior is the central tension in Carrie. At home, Carrie is battling Margaret and her faux-religious fervor, but the other young women in the story are also battling to reclaim their identities from patriarchal society. Chris, Carrie’s chief tormentor, is shown to have an indifferent, impatient father who sees his daughter as he wants to see her and rejects anything that doesn’t fit his perspective. Even when faced with Chris’s blatant cruelty and, let’s face it, borderline sociopathic tendencies, he doesn’t have time for her and simply expects her to act as the proper young woman he wants her to be. Likewise Chris’s psychotic boyfriend, Billy, threatens violence when she deviates from her allotted role as his moll. Chris is torn between masculine ideals and she never finds her own identity and so gives in to the worst of those expectations.

The one character capable of redemption is Sue Snell (Gabriella Wilde), who is sexually active, suggesting that female value is

determined—gasp—not by sexuality but by one’s sense of personal morality. Sue’s actualization is fueled by guilt and remorse, but in the end, even though she has broken the central tenet of young womanhood (don’t have sex, you might end up pregnant!), she becomes the “good girl” her mother believed her to be. If Carrie is the fantasy of feminine power, then Sue is its practical application. Carrie can murder her tormentors with mind bullets but Sue’s strength derives from her own internal moral compass. She has done wrong and she knows it, and she sets about atoning for it by offering a uniquely feminine sacrifice—the perfect prom night. Sue punishes herself, submitting to both Desjardin’s physical punishment for bullying Carrie and also a self-imposed ban on prom.

No one asks these things of Sue. Her mother is, like Chris’s father, willfully blind to her daughter’s shortcomings, and no one expects, or even believes, that she is honestly trying to make up for a grievous lapse in judgment. And Sue does not, except for critical scenes at the beginning and end of the movie, interact with Carrie directly. They run on parallel tracks, discovering their individuality and learning to stand on their own in concert, if not in perfect harmony. Both girls learn to stand up for themselves and to define themselves by their own expectations, not those foisted on them by others. Sue is spared in the final confrontation when Carrie realizes she is pregnant—carrying a girl—but it isn’t a perpetuation of the cycle from which she and Carrie escaped. Sue, having self-actualized and seen the full extent of feminine power, is now free to raise her daughter with the knowledge of possibility, not limits.

The final image in Carrie is of Carrie White’s defaced gravestone cracking in half due to some unseen force, suggesting that the bullying that provoked Carrie’s rage is a repeatable circumstance. However, it can also be seen as a refusal of female power and identity to ever be buried and thus controlled. Even from beyond the grave Carrie’s power is uncontained, an elemental force of reckoning. Others try to put Carrie in her place (“burn in hell”), but that is the very notion Carrie, and Carrie, is constantly rejecting.

3 thoughts on “Carrie: On Female Power and Identity”