I wish I could remember the name of the article, or at least the philosopher who wrote it, but I once read a contemporary philosophical theory about the brain’s role in determining our humanity. Basically the theory goes that humans are obsessed with coincidences, that we define ourselves, as individuals and groups, by stringing together coincidences to create bonds, e.g. “You like the color blue? I like the color blue, too! We’re super best friends.” This is a false construct based on a completely random happenstance but we deem it significant because it gives us a sense of community, to share something that is as inherently individual and arbitrary as one’s personal tastes.

(To go even deeper into it, liking a color is dumbass waste of time because who’s to say blue is really blue? Blue is what we call a particular frequency of light reflecting off the curvature of our atmosphere because we don’t know—can’t know—what it really is because we are not blue, we have simply assigned a random word to designate it within our linguistic construct. The very notion of color is predicated on a number of random factors, such as where on Earth you are, the acuity of your own visual spectrum, and the intensity of the sun’s rays striking the atmosphere at a particular time of day. It’s just something we’ve made up to deal with the world around us. It’s not actually the real thing we’re looking at, merely a representation of that thing, because we can’t know the real thing because we are not it. To an alien looking at Earth, blue may as well be called snot and it’s all the same thing. What is your favorite color? Rainbow. Why? Why not?)

We seek this community because a substantial portion of our brain is occupied by our sub-conscious and unending horror at our own insignificance—basically a fair chunk of our mind is constantly screaming into the infinite nothingness and is perpetually stricken by the total lack of fucks the universe has for us. We live with this low-grade repellant horror and seek to quash it by forming societies and declaring this, that or the other thing as evidence of our importance. But really we’re just random molecules floating in random space until we cease to float, at which point our molecules go on to become some other thing’s molecules and anything we did, or didn’t do, doesn’t matter. In short: Everything is meaningless, there’s no point to anything, and we all die alone (and shit our pants when we do).

For some reason I’m not allowed to speak at weddings, birthdays, anniversaries, graduations, or any other event where people are supposed to be feeling that particular thing we call happy. And my “Dan almost certainly shit his pants when he died, and you will, too” eulogy wasn’t a big hit, either.

So what does this have to do with Alfonso Cuaron’s superb space movie, Gravity? Everything, as Gravity is basically the cinematic representation of that theory, of our insignificance and the universe’s total hostility toward the human condition, and how that shapes our identity. Like The Impossible, Gravity is a survival story, but where The Impossible was as much about protecting one’s young as it was self-preservation, Gravity is purely about humanity’s animal will to survive with no other motivating factors beyond “keep breathing”. I adore this movie on every level, not least of which is that finally I have something that clearly and precisely—it’s only 85 minutes long, minus credits—represents my world view.

On a cinematic level, Gravity is a marvel. Cuaron’s direction combined with the efforts of previous collaborators, editor Mark Sanger and cinematographer Emmanuel Lubezki (who is also Terrence Malick’s go-to DP), creates a visually arresting movie that doesn’t look like anything else you’ve seen this year. The visual effects are seamless and while seeing it in IMAX isn’t imperative, I would recommend seeing it in 3D, as for once, 3D is used in ways that actually enhance the narrative itself, not just the look of the film. Sandra Bullock and George Clooney—the only actors present on film—give fine performances, particularly Bullock who has simply never been better. 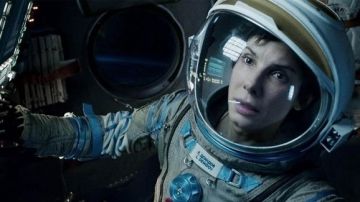 The story is almost irrelevant and the narrative functions only just as much as it needs to in order to keep driving forward, but those aren’t bad things. This is a very simple story: the universe is terrifyingly vast and space is completely fucking inhospitable, the end. But for that leanness, there is real character shading in Matt Kowalski, Clooney’s talkative veteran, and Ryan Stone, Bullock’s more taciturn scientist. It matters when things happen to them, you care about them and are affected by their struggle—DAMN IS THIS SUPER TENSE TO SIT THROUGH—but the narrative is confined to the immediate. No time is wasted on pontification; there is a dream sequence but there’s no visual way to represent a mind coming to a decision, so it’s acceptable as necessary to advance the plot.

On the surface, everything about Gravity is about destruction. Space is not constructive to human life—which we’re told in the opening title card—and so therefore it must be a destructive force. (False. Space is space and our relationship to it is meaningless as it will simply continue to be space, with or without us. It, like everything, is neutral until we decide to call it something else.) But at heart Gravity is a story about rebirth—literally, there is a lot of birth imagery: Bullock floats in the fetal position within the small confine of a womb-like airlock, a tether line serving as her umbilical cord, Bullock emerges from water, which birthed all life, reborn after her ordeal.

And this is why I like its philosophical implications so much. Ryan Stone, we learn, has already lost everything a human can lose short of life itself, but she rediscovers her will to live when she accepts that what is happening will happen whether she is alive or not. Life is a conscious choice, made when there is seemingly nothing left to live for simply because being alive: why not? (For the other side of this coin, see also: Bartleby the Scrivener, another personal favorite.) Ryan Stone decides to live, accepts that her decision ultimately means nothing, and carries on anyway. This, to me, is the perfect representation of hope. And Gravity articulates it cleanly and clearly, in an entertaining and fully immersive way. In stunning digital 3D.

3 thoughts on “Gravity: Everything is pointless and we all die alone”