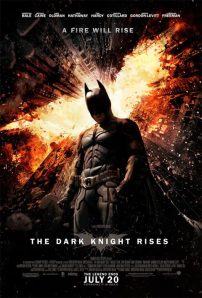 The pressure cooker leading up to The Dark Knight Rises has been unbearable. The expectations, both fiscal and critical, are through the roof, and the question everyone wants answered is can writer/director Christopher Nolan top 2008’s The Dark Knight, a movie many consider to be the best superhero movie ever made. The answer: Kind of. Rises is, in many ways, an escalation from The Dark Knight, building on what’s come before and continuing to improve on an already nearly flawless concept. There is, though, one crucial area in which Rises sort of disappoints—it’s not terribly fun to watch.

Before you start yelling, consider that what makes it more than just your average superhero movie—indeed, I’ve never really thought of Nolan’s Batman series as just superhero movies—is also what puts a damper on the movie. It’s that hyper-realism, the grounding Nolan gives Batman in a world fraught with our own post-millennial fears and traumas that makes the Dark Knight trilogy unique, but it’s also kind of a bummer. The Dark Knight resonated with so many because it struck the perfect balance between the gritty real world problems and the jaw-dropping action of a superhero adventure. It was dark, yes,

but even watching The Joker be villainy and evil was fun because of the spirited, almost gleefully abandoned, approach to the conflict. There’s a loss of verve in Rises and I found myself wondering—did Nolan really want to make this movie? Or did he just have to get through a contract?

Now, before you crucify me, let me detail what works about Rises: most of it. It’s gorgeously shot, a stellar technical production, and the acting is top notch across the board. Christian Bale is especially good, tapping into sides of Bruce Wayne previously only hinted at. This is an older, more tired Wayne and Bale nails his weariness and physical limitations. Though the overall tone is a bummer, there are moments of fist-pumping action and big payoffs. It just isn’t consistent enough to lighten the overall drag of the film. But there are a couple of breathtaking action set pieces that will get your blood pumping.

Michael Caine, too, is excellent as the Wayne family retainer, Alfred. Some have quibbled with Alfred’s self-imposed exile from Wayne Manor, but I liked his character arc. This Alfred has

always been spikier than just the stiff-upper-lipped butler we’re used to. He’s never really been a “yes, sir” and “very good, sir” kind of servant. He’s much more of a proper father to Bruce, and that’s what you get here—a father who can no longer watch his son’s self-destruction. Similarly, I liked the stripped-down take on Catwoman, who is referred to by her proper name, Selina Kyle, and never as “Catwoman”. As played by Anne Hathaway, Selina is prickly and sexy in turns, as capable of kicking ass as she is running away. She’s a survivor, unapologetically bitter about what she sees as an unfair hand in life. I liked this iteration of Selina Kyle a lot, and she often provided a needed kick when things got a little too draggy.

Also new to the series is Joseph Gordon-Levitt as Gotham cop John Blake. Blake has a past connection to Bruce Wayne, and for most of the film, he provides a neat foil to Wayne.

JGL’s Blake is all square-jawed determination and courage, and he does a terrific job of sparring with Bruce/Batman about the need for masks. Unfortunately, this also plays into one of the problems with the movie, which are a few glaring gaps in logic. It’s not so much a faulty character arc for Blake as it is a last minute turn that pretty much goes back on everything his character has said up to that point. It prompted the feeling I had about the film overall—did Nolan actually want to do that, or did he have to?

After two viewings of this movie, my biggest issue lies with these logic gaps. It’s like Nolan is hitting certain beats—checking boxes—without much regard for how he’s getting his characters to those places. With The Dark Knight the stakes felt very high and you really didn’t have a sense for how things were going to go. In Rises, though, you can see the ending clearly by the end of act one. And knowing that, all the urgency is gone from the rest of the movie, because the ending has already been spelled out. It takes all the fun out of it. There’s also no urgency during the occupation of Gotham, lead by the gigantic, scary Bane (Tom Hardy).

Bane is a villain and the opening sequence of the film is a stunner, and he is terrifying. But once he gets Gotham on its knees, it’s like…nothing. (Edit: Bane is a mid-level villain. He gets a great set up but the lack of follow through kills it, and in retrospect, Talia al-Ghul’s masterminding everything undercuts what’s scariest about him–the possibility that he’s more than just the muscle.) There’s ten seconds of looting and then a surprisingly civil 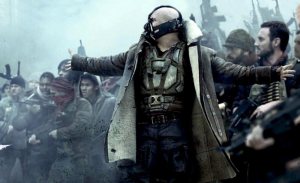 kangaroo court. On the one hand, the Occupy Gotham part has a pleasingly French Revolution vibe. On the other, given the genuinely scary set up for Bane, I was expecting way more chaos and fear during his reign of terror. But everything remains quite tidy and neat, and the system of punishment being doled out is completely bloodless. Even Bane’s final fight with Batman is a letdown. Their first confrontation is satisfyingly bone-crushing, but their big to-do at the end is just like, a boxing match. Hardy is very good as Bane, infusing him with genuine intelligence, not just physical presence. I expected more actual terror to emanate from him.

After both viewings, I left with a nagging sense of not quite enough. There were some promises made by The Dark Knight that didn’t get fulfilled. The ending is a perfect

illustration of this. If ever a superhero film could go balls-out and utterly destroy the hero, it’s Nolan’s Batman films. But when you arrive at the long-expected ending, it’s a cop out. It’s an unnecessary white flag waved at audience appeasement. And the final shot, which elicited a huge cheer from the audience, was premature, since Nolan & Co. are clocking out after this one. It’s not like we’ll see where that last image leads. It’s a cool moment, don’t get me wrong, but it’s little more than a tease of something we’ll never be delivered. Overall, I did like The Dark Knight Rises. (Edit: Nah, it’s the worst of Christopher Nolan’s movies. Which means it’s still better than many movies, especially blockbuster types, but it’s not holding up at all and you can really feel Nolan half-assing it.) It’s just not one I feel compelled to make people see, like I did with The Dark Knight. It doesn’t feel as important as its predecessor, or as urgent.

Oh yeah, by the way, this movie is super long. Please consider the run time—which, with previews added in will easily top three hours—before taking babies, small squirmy children or a Big Gulp into the theater. You’re going to be there for a while.

9 thoughts on “The Dark Knight Rises, and delivers, kind of”