Last summer I wrote about the “Snow White war” going on between Universal, home of Snow White and the Huntsman and Relativity, home of Mirror Mirror. At the time, I said it was bad for movies because both studios were rushing their projects in an effort to one-up each other, and that while Universal was running the risk of shortchanging a first-time features director, Relativity was making the bigger mistake as they were pushing so hard in an effort to get into theaters first that there was no way making a good movie was their top priority. It was purely about beating Universal. And guess what? I was right—Relativity’s end product, while in theaters first, is not good. Mirror Mirror is terrible and the “Snow White war” turned out to be bad for movies. And, for bad movies.

While much of Cinesnark exists simply as a means of entertaining myself, I do have the goal of trying to help people decide how to spend their entertainment dollars wisely. I’ve said it before and it bears repeating—movie-going has gotten to be an expensive proposition, too expensive to blunder into a theater blindly, having no idea what is most worth your time and money. I make some effort to put out enough information to help people decide how to spend their money, and in the name of wise movie-spending, I am BEGGING you not to see Mirror Mirror. We cannot award such shitty filmmaking with our dollars. It only encourages more shitty filmmaking. It’s one thing when everyone puts everything they’ve got into a movie and it comes out crappy anyway—in fact, those types of movies can be amazing in their own right—but it’s something else entirely when no one was even trying to make a worthwhile movie in the first place. And no one on Mirror Mirror was trying, except for the guys who played the dwarves, and I felt awful for them because they got some truly terrible material to work with.

Let’s start with what was good about Mirror Mirror. There was really only one thing—the visuals. Director Tarsem Singh

(Immortals, The Cell) is known for his stunning visuals, which I have greatly admired in the past, and after the surprisingly dingy Immortals, he’s back on form with Mirror Mirror. The colors are bright and acid trippy, the costumes are elaborate, and various aesthetic influences are brought together in a way that is surprising and pleasing to the eye. Production designer Tom Foden’s (Immortals, The Cell) sets are rich in texture and, for the most part, are neutral in color. They perfectly set off the costumes of Eiko Ishioka, Tarsem’s collaborator who, sadly, died earlier this year. Ishioka’s costumes are the single most worthwhile aspect of Mirror Mirror, borrowing from Elizabethan and Georgian fashions and imbuing a sense of whimsy and impracticality into each piece. Tarsem and his crew have created a world that, while detailed and rich, feels distinctly false. We’re aware at every moment that this is an elaborate stage, and it’s not a bad feeling. It makes me want to see a Shakespeare play as staged by Tarsem.

So now that I’ve said something nice about Mirror Mirror, let’s talk about what was awful about the movie, which is absolutely everything else. First and foremost, the script is shit. You know that scene in Jurassic Park when Laura Dern

is up to her elbows in a giant mountain of dinosaur poo? Yeah, that’s pretty much what watching Mirror Mirror is like: being up to your elbows in a giant mountain of dinosaur poo. The movie makes little narrative sense—there’s no clear motivation for Snow White to run away from the evil queen, she just runs away in a fit of pique. And the “evil” queen’s motivations are that her wild spending has driven her kingdom to the brink of poverty. Somewhere in there, there’s a topical kernel that could have been spun into a fresh take on the classic fairy tale, but here it’s buried under directionless storytelling and Three Stooges-style sight gags. And whatever you do, especially if you have a daughter/niece/younger sister and are being won over by the “this time the princess is the savior” selling point—DO NOT BUY IT. This Snow White is NOT a good example of strong femininity. In the end, the big solution to the kingdom’s problems, the way Snow saves the day, is to marry the dopey prince whose only value is judged by his handsomeness and wealth. It’s a TERRIBLE ending that flies directly in the face of what this revitalized fairy tale trend is supposed to be about, which is reinventing these traditionally passive heroines as strong female role models. THIS IS NOT THAT MOVIE.

The second biggest problem is Tarsem’s direction. I’ve never thought of him as a storyteller, really, but at his best he 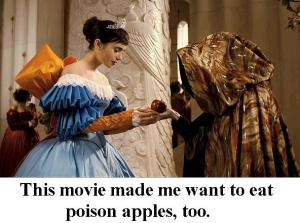 manages to string together his wild visuals into an interesting array. Not so here. Depending on the day of the week, Tarsem either doesn’t care about scripting or it’s all the writers’ fault that his movies suck, but either way, he makes no effort to overcome this shallow script with a flair for storytelling. Quite the opposite, in fact. Instead of trying to elevate the material he takes it out back and beats it to death with a blunt shovel behind the woodshed. The pacing is simply atrocious—the entire second act moves so slowly it’s like it’s been filtered through molasses, and the final half-hour had me contemplating gnawing off my own hand in order to escape. And Tarsem totally fails to get anything resembling a proper performance from any of his actors. I’ve never really thought of Tarsem as an “actor’s director”, but I’ve also never thought of his movies as featuring such spectacularly bad acting, either. But Mirror Mirror has forever changed that and now I don’t think Tarsem should be allowed to direct movies on his own. He needs a co-director to handle the scripting and acting aspects of moviemaking so he can focus on the visual.

Speaking of the acting, let’s talk about that. Everyone blew massive chunks. Julia Roberts stars as the not-so-much-evil-as-just-kind-of-bitchy-like-the-queen-bee-in-high-school queen, Armie Hammer (J. Edgar, The Social Network) debases himself in ways

previously only seen in amateur pornography, Lily Collins (Abduction) proves that while pretty as a pretty thing can be, she has all the presence of a cardboard box, and Nathan Lane must have lost a bet because there is no other explanation for his participation in this mess. Roberts phones it in from start to finish, never fully engaging with her character or anyone else’s, and at points, you can actually see the dollar signs flashing in her eyes. I was most embarrassed for Hammer, who has done very good work in the last couple years and should be better than this. He, too, phones it in, but he also has the worst character with the worst dialogue and scenarios. At the point that he’s licking the queen’s face because she’s dosed him with “puppy love” potion I could barely watch. It was physically painful, how embarrassed I was. And as for Collins, she gives it the ole college try, and she looks perfectly lovely as Snow White, but there’s no there there. At no point does she succeed in making me care about Snow, except to pray for this godawful movie to be over.

So please, PLEASE, believe me when I say that Mirror Mirror is not worth your time and certainly not your money. If you’re a parent or are otherwise in charge of a tiny human person, and you want to take them to the movies, please wait for The Pirates! Band of Misfits, which comes out in a few weeks and is actually funny, charming, and worth the expense of a trip to the movies. I’m begging you. Do not reward Relativity for this jackass movie.