I can’t remember the last time I laughed and cried so hard in a movie as I did in 50/50. Based on the real-life story of screenwriter Will Reiser, 50/50 follows Adam after he’s diagnosed with a rare form of cancer at 27. Joseph Gordon-Levitt gives one of his best performances as Adam and he’s ably supported by Anna Kendrick, Anjelica Huston and a surprisingly tolerable Seth Rogen. 50/50 barely touches on the physical reality of cancer—we only briefly see the effects of chemo—but the emotional reality is sharply drawn, in turns painfully raw and touchingly hopeful. There was no more life-affirming movie in 2011.

Alexander Payne returns to filmmaking with this adaptation of Kauai Hart Hemmings’ novel of the same name. George Clooney gives his best performance in years as Matt King, the patriarch of a large Hawaiian land family who is dealing with crises left and right—selling the last tangible piece of his family’s inheritance and his wife is about to be unhooked from life support. The Descendants deals with grief and anger when there’s no one to get mad at—Matt can hardly yell at his near-dead wife for cheating on him—but it also shows that forgiveness of self is as important as forgiveness of others. A bit more optimistic than Payne usually goes, The Descendants marks a new phase for the director.

As far as I’m concerned, this is the best movie of the year. A taut, tightly edited action/thriller/getaway/mob movie hybrid, what sets Drive apart is the surprisingly tender love story at its center. Anchored by Ryan Gosling’s superb work as the unnamed driver, Drive is a helluva US debut for director Nicolas Winding Refn. Don’t let its explosive violence—after the elevator scene you’ll never see The Gos the same way again—put you off. Drive is one of the few movies of 2011 that lived up to its hype, and then some.

Centered around Sergeant Gerry Boyle (Brendon Gleeson in a career role), a plodding, Columbo-type police officer, or “garda”, in rural west Ireland, The Guard is a much less flashy movie than In Bruges, but in some ways, it’s a much more rewarding one. Written and directed by John Michael McDonagh, The Guard is a crime movie that confounds expectations at every turn. Sergeant Boyle is a racist jerk (or is he?), the American FBI agent (Don Cheadle) is entirely unhelpful, the hookers don’t have hearts of gold but are nice people, and the criminals have more honor than anyone else. It’s a sharp, sly black comedy featuring an outstanding job by Gleeson.

This is the unsexiest sex movie you’ll ever see. Michael Fassbender defines his career for at least the next decade as Brandon, a sex addict who successfully manages to hide his addiction until his unhinged sister—conveniently named Sissy—shows up on his doorstep. The movie, directed by Steve McQueen (Hunger), is typically spare-bones, as is McQueen’s style, but with The Fassbender’s performance front and center, it doesn’t need much else going on. Carey Mulligan acquits herself nicely as Sissy, except for her awful singing, but this is The Fassbender’s show from start to finish. This stark examination of sex addiction thoroughly reclaims it from the realm of cheating assholes and gives it back to the real addicts, the people who have a compulsion to consume and destroy that they can’t control. Shame is a major bummer but you won’t see acting better than this anywhere.

Impeccably written, shot, staged, acted and directed, Tinker Tailor Soldier Spy is the most satisfying thriller I’ve seen in a long time. Lead by Gary Oldman as George Smiley, Tomas Alfredson’s (Let the Right One In) take on John le Carre’s classic Cold War novel could not be any better. There’s little violence, none of it objectionable, and even less direct confrontation, yet the tension ratchets up steadily throughout the film until the act of walking out of a building with a folder seems like being on the brink of utter disaster. As Smiley works his way through a list of possible moles, we see the ruin that lives dedicated to secrets has wrecked for the various members of the upper echelon of the British secret service. You can’t complain about lack of quality at the cinema when Tinker Tailor is out there. 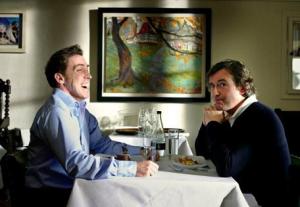 Gentlemen to bed, for tomorrow we leave at 9:30. I’d love to quote your own work back at you, but I don’t know any. You sound like the Nazi from Inglorious Basterds. Was there a lot of alcohol in your childhood garden? You could take her around and show her the gun crime sites. Have you ever thought of doing a sponsored silence? You might touch my bottom. You look like you’re recovering from a stroke and learning how to get mobility again.

The Trip is hands down the funniest movie of 2011. Edited down from the UK television show (both versions directed by Michael Winterbottom), The Trip stars Steve Coogan (Tropic Thunder) and Rob Brydon (UK television personality) as basically themselves in a largely-improvised pseudo-buddy road movie. It’s everything good comedy should be and it’s highly quotable.

SHE WAS ONLY FIFTEEN.

Tucker and Dale vs. Evil

This was a close call with Attack the Block, but it came down to repeated watchability. I really, really liked Attack the Block, but I’ve had no desire to rewatch it. Tucker and Dale, meanwhile, lives in my Netflix queue and gets watched. A lot. A horror-comedy twist on the classic “hillbillies in the woods” sub-genre, Tucker and Dale vs. Evil is funny enough and broad enough to play to non-genre audiences. It’s long-delayed and ultimately only limited release is a crime, really, as this should have been a slam-dunk October hit. Alan Tudyk (Transformers 3, Death at a Funeral) and Tyler Labine (Reaper) have great comic chemistry and while the movie isn’t quotable like The Trip, the escalating sight gags are hilarious. This little gem is destined to become a genre-defining cult classic. 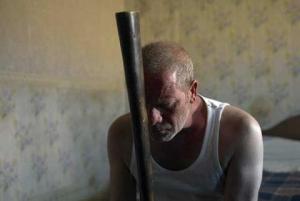 Featuring some of the worst human/animal, animal/human, and human/human violence you’ll see on screen, Tyrannosaur is not for everyone. But if you can deal with its unrelentingly bleak tone, the rewards of actor Paddy Considine’s directorial debut are great. Peter Mullan (War Horse) gives what is arguably the only male performance of the year that could stand up to Michael Fassbender in Shame. His smoke-seared voice and weathered face are perfect for angry widower Joseph, just as Olivia Colman’s (Hot Fuzz) luminous smile suits down-trodden Hannah perfectly. Also in the mix is Eddie Marsan (War Horse) in probably the scariest role you’ll ever want to see him in. These are bitter, broken people with bitter, broken lives but the unexpected uptick of hope at the end serves to remind that everyone is capable of redemption. No, it’s not for everyone, but it’s great all the same.

Here’s another hidden indie gem that should have been SO MUCH bigger than it was. Win Win stars Paul Giamatti as regular schmoe Mike, who is faced with a morally dubious choice. The story is rooted in our post-economic-collapse new reality—what Mike does is not right, but you understand the pressure he is under. Amidst this quagmire, Mike and his wife Jackie (the always excellent Amy Ryan) take in a runaway teen, Kyle, who turns out to be a wrestling prodigy. Alex Shaffer was plucked from obscurity to play Kyle—he’s a real-life high school wrestling champ—and his debut overshadows every other newcomer this year, even Elizabeth Olsen. Another stand-out performer is Bobby Cannavale (The Station Agent) as Terry, Mike’s friend struggling through a divorce. Watch it with your parents or your kids—everyone will love Win Win.

Movies That Everyone Else Loved That I Did Not

The Artist, Hugo, Melancholia, Rise of the Planet of the Apes