I really love technology. And obviously, I’m all about Internet culture and New Journalism. A huge, huge downside to entertainment

journalism in the post-Google era, though, is that a whole lot of people assume they understand something based on scraps of information doled out willy-nilly. Nowhere does this bug me more than with casting rumors. I’m at the point where, when I’m catching up with an acquaintance who works in a casting office, I routinely say, “Can you please keep that shit off the Internet? It’s exhausting to watch everyone freak out over something that could very well amount to nothing.” Meaning—I don’t think casting should ever be announced until the first day of principal photography on a film shoot. Case in point—everyone was assuming Benicio del Toro was going to be in Star Trek 2, probably as the villain, but just yesterday news came out that his negotiations fell apart and he’s out. And everyone was like OMG THIS IS A CATASTROPHE STAR TREK IS DOOOMED!!!1!!!1!!!

Bitch please. That shit happens all the time.

It usually happens because an actor thinks they’re worth more than the studio is willing to pay (I’m looking at you, Viggo Mortensen), but there are myriad reasons casting talks can fall through. Scheduling. Money. Chemistry doesn’t work out between actors X and Y. In reality, most movies, on average, run through 3-4 actors before a part is cast (I mean in serious talks, not counting the dozens, if not hundreds that may audition and never get a call back). But these days, when so many sit on the Internet and obsess over every little detail, each casting announcement is met with undeserved fanfare and each “oh never mind, that didn’t work” is greeted with uncontrollable despair. If someone enters into talks for a part but those talks don’t pan out, fans of whatever person/project is involved often start up with the “is this project in trouble?” talk.

Take Mortensen and Snow White and the Huntsman earlier this year. Originally tapped for the lead role of the Huntsman, 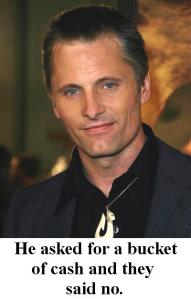 Mortensen got into talks with Universal which ultimately broke down over money. He later cited health and scheduling reasons, which sure, I’ll allow for that to have been a factor. But money was the motivator (from a PR standpoint, though, he can’t really go around saying, “I asked for a bucket of cash and they said no” without alienating pretty much everyone, so it’s a good dodge). Next Universal, not in a panic, called up Hugh Jackman. They didn’t get much further than that with him because he was trying to get The Wolverine off the ground and he passed. They next approached, still not panicking, Thor star Chris Hemsworth, who ended up landing the part. The search was broader than that—you can never put all your eggs in one basket—but Universal only engaged in three serious conversations before casting the role. Totally normal.

Never would’ve known it from the Internet. Is Snow White in trouble? was the banner headline on a lot of film/entertainment sites. (For the record, the only projects I’ve heard of having serious casting trouble this year are Pride & Prejudice & Zombies and The Mortal Instruments.) At no point, though, was Universal worried. They had their list of people they wanted and they ended up getting someone off that list. What’s the big deal?

In the real world, there is no big deal. But on the internet, it’s a disaster because a couple of guys passed. Successful 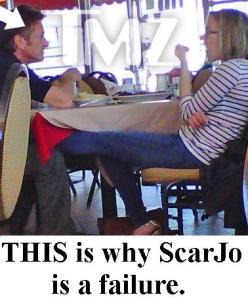 actors routinely pass on projects. They pass on way more than they take. Passing on a project is not a big deal, in and of itself. Successful actors are also passed over for projects. David Fincher recently stated that he ix-nayed Scarlett Johansson for The Girl with the Dragon Tattoo. Is ScarJo suddenly a failure? No, she just wasn’t right for what Fincher wanted to do. I’m totally stating the obvious—this is all common sense stuff—but I challenge you to pick a project in development and follow it through casting. You’ll be amazed at how people lose their shit over nothing.

Of course, it all gets worse when some actor mouths off about almost getting a part and then we start playing Hollywood Sliding Doors. Hollywood Sliding Doors can be fun—I always wonder how different things would be for Dougray Scott today if he had landed Wolverine back in 1999—but generally, it’s not something I put a lot of stock into. If you’ve been reading this blog for a while, you know I have a lot of pet peeves. Well one of my biggest is when an actor recasts herself in a role that went to someone else. First and foremost, this is intolerably RUDE. It detracts from the person who actually got the role. Second, it’s incredibly bad PR. What if you have to work with that person you just backhand complimented?

This is fresh in my mind because we’ve just had two prominent examples of this. First, Jessica Biel bemoaned how Anne 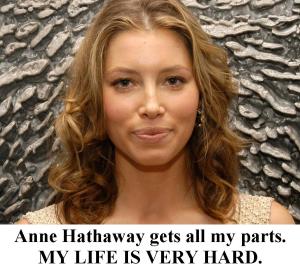 Hathaway keeps getting all the parts she goes out for. It reminded me of this scene in The Trip when Steve Coogan says, “I have an albatross around my neck and it has the face of Michael Sheen.” Biel made herself look pathetic but she also took the shine off Hathaway’s achievements in winning some sought-after, competitive roles. Suddenly Anne Hathaway being Catwoman = pitying Jessica Biel. How gross, to make someone else’s accomplishment about you. It’s like a normal person giving a toast during a co-worker’s “yay promotion!” party and saying, “Well I think I would have done just as a good a job, but congrats, I guess.” TACKY.

Even worse than the “poor me” tactic, is the flat out, “Yeah, I was offered that but I turned it down” approach to self-recasting. Michelle Trachtenberg just pulled this when she said she was offered the role of Bella Swan in Twilight but passed because of either scheduling and/or “already having done the vampire thing”. This is even worse than going “poor me” about losing a role, because at least “poor me” makes it sound like the role was worth having. Pay attention to the kinds of actors that will play the “yeah I could have had that” card about a role—you rarely see it coming from someone really successful. Trachtenberg is stuck on TV, once again playing a character a lot of fans (this time Gossip Girl, last time, Buffy the Vampire Slayer) blame for sucking up their show. Her film career is virtually non-existent. In the interim, she’s watched Kristen Stewart go supernova as Bella Swan.

As IF she wouldn’t have taken Twilight if it was offered to her back in 2007. You know what Trachtenberg was doing in

2007-2008? TV movies. Like she would have actually passed on the lead role in a potential franchise. But that’s the point of the “yeah, I could have had that” tactic—to make the person saying it look so desirable and busy that he/she couldn’t possibly have considered doing whatever major part they turned down. But ultimately making these kinds of statements isn’t worth it. Beyond being rude in the general sense, in an industry sense, it’s so unprofessional I almost can’t bear it. As I mentioned earlier, what if you have to work with the person who did get the role? These are the statements that make PR reps groan out loud and force agents into apologizing for twatty clients. It’s not that I doubt Trachtenberg’s veracity—I believe she talked to Catherine Hardwicke about Twilight. I just don’t for one second believe that she actually passed on the role. Hundreds of actresses were auditioned for Bella Swan but only one was made a formal offer. Neither Trachtenberg nor anyone else ever even had the chance to turn the part down.

And that’s the problem with playing the “yeah, I could have had that” card. Casting for a big part like Bella Swan (or Catwoman) is always followed very closely both within the industry and by industry-watchers. The ramification of recasting yourself in such a role is that everyone will cry BS because the casting story is probably well known. Basically, you look like a liar. But to the public, now it looks like Stewart was second-choice. And now people are assuming something about casting that isn’t true. What gets lost in this kind of posturing is that there are steps to casting. There are auditions, screen tests, talks, offers, negotiations. It’s possible to be in talks for a role you haven’t been formally offered, such as Jackman and Snow White. And with big parts like Bella Swan, even if the director has a clear favorite, they still have to audition and test other people. Partly to cover their own asses—what if there is a real scheduling conflict and your #1 isn’t available? It’s why you can’t put all your eggs in one basket.

Tattoo. For The Descendants, director Alexander Payne hand-picked Shailene Woodley as his first choice to play Alex King, but the producers wanted him to audition actresses native to Hawaii. So Woodley had to cool her heels while Payne did that before he could bring her back in. For Dragon Tattoo, Fincher wanted a relative unknown, his favorite being Rooney Mara, while the studio wanted a name. So Fincher was basically forced to screen test a bunch of actresses he knew he didn’t want to hire. Does that in any way detract from Woodley and Mara getting their respective parts? No, it’s business as usual. But should Mara and/or Woodley hit it big, you know some twat will open her mouth and go, “Yeah, I could have had that part.”

Casting doesn’t have to be stressful. Its very nature is change and flux. Any actor you like is going to lose a part and pass on a part in turn. Any project you’re interested in will likely cycle through several people before landing on the person right for the role. Some sad-sack actor will eventually bemoan losing out to someone they perceive as more successful. And inevitably, a twatty actor will claim they could have had a major role that, no, they couldn’t. Any time a new casting announcement is published, we should all just take a breath and remember that until cameras are rolling, nothing is set in stone.

15 thoughts on “Casting should not be so stressful”