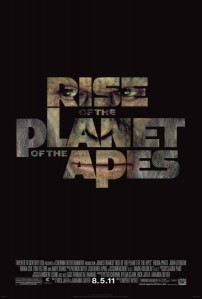 That is a lot of prepositional phrases for one title. Makes it awkward to say. From here on out, we’re calling it Apes, which should have been the title of the movie. Because it was only about the apes. Apes received an 81% rating on Rotten Tomatoes. Avatar registered at 83%. This is an important correlation because it says that everyone liked Apes and Avatar and I did not. I am in the minority on this. I know I am. I know you will all be like, “Oh, I loved Apes!” And I’ll go, “Good for you—you’re wrong, too” I disliked Apes for the same reason that I disliked Avatar, which is chiefly…

SPECIAL EFFECTS ARE NOT A MOVIE.

I will give credit where credit is due—Apes is a better all around movie than Avatar was. Avatar was transparently a ripoff of Ferngully, Dances with Wolves, and Pocahontas—there wasn’t an original idea anywhere in that movie, which is why it blew chunks (also, Sam Worthington is a terrible actor and I wanted to stab myself the whole time he was on screen). Apes actually tries to tell a story, it asks some deep questions, it examines the worst-case scenario of one of humanity’s greyest moral zones. I give Apes a lot of credit for going into a summer blockbuster flick with that approach.

Unfortunately, Apes doesn’t quite deliver on its high-minded promise. Just as research scientist Will Rodman’s (James 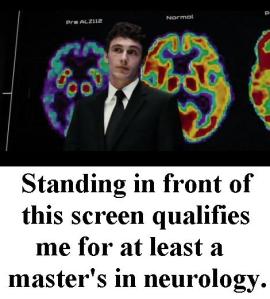 Franco) cure for Alzheimer’s keeps breaking down, so does Apes. It’s not entirely deficient as a movie, it’s just not very good. But we’ll start with the positive. First, those moral ideals. The plot revolves around animal testing and its consequences, which I found fascinating. This is the terrible predicament we face and I was glad that this popcorn flick brought up these issues to a mass audience. Will is developing a cure of Alzheimer’s, which if you’ve dealt with it in your family or friends, you know is a terrible, awful, slow way to die. A cure would truly be a miracle. But at what cost? Because there’s no way to get an Alzheimer’s cure (or any cure, really) without testing on animals at some stage. And animal testing is inhumane, no matter how humanely it’s handled.

The lab, Gen Sys, shown in Apes is a relatively humane place. You see handlers who really care for the chimps, scientists

who are sympathetic to what they’re putting the apes through, though animal testing is inherently not fun for animals. But at the end of the day, Will goes home and sees his Alzheimer’s-stricken father (John Lithgow, utterly wasted) and he goes back the next day ready to continue testing. Because for Will, the cost is worth it should his cure work. And his cure does work, it works so well that an ape, Bright Eyes, treated with it not only shows reversal of brain matter loss, but improvement. Unfortunately, she also goes crazy during a board meeting and gets Will’s program shut down, as well as all the apes eliminated. One baby chimp is saved by Will’s chief handler, Franklin (Tyler Labine, Tucker and Dale vs. Evil, Reaper), and Will ends up taking the baby chimp home and caring for it, and naming it Caesar.

Act one is all about Caesar growing up in Will’s home and how Will tests his cure on his dad (Will is morally culpable, we are supposed to infer), and Caesar’s development as an ape aware intellectually and emotionally. Act two is all about how 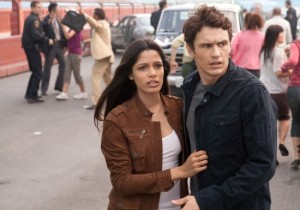 owning chimps as pet/companions is not a good idea and Caesar, after attacking an obnoxious neighbor while protecting John Lithgow, is remanded to an ape house. I have no idea what that facility was supposed to be. The pound for apes? I’d think they’d just send him to the nearest zoo equipped to handle apes. I don’t think the Ape Pound is a real place. If it is, please send me linkage. Act three is the rise of the apes part, and easily the best act in the movie. In the middle of all that Will falls for a veterinarian/zoologist type played by Freida Pinto (Slumdog Millionaire, Miral) who is somehow, despite being trained to PROTECT ANIMALS, okay with Will keeping Caesar cooped up in his attic. Pinto’s character, another whose name I can’t remember, disapproves of Will’s testing and Caesar’s presence in his house, but not enough to like, report him or leave him or anything.

Another big plus, the biggest plus, for Apes are the special effects, especially Andy Serkis’ work as Caesar. Serkis has carved a niche for himself as the leading performance capture artist (which is different from being an actor) in movies and he really does deliver a Performance as Caesar. He won’t and shouldn’t be eligible for an acting Oscar but I would have zero problem with Serkis being singled out with a Special Achievement award. He demonstrates the potential of motion capture to bring realistic movement and expressions to CGI animation and how effective that merger can be. Caesar feels more real than any other character in the movie. Which brings us to the problems…

Let’s start with the human actors. They’re pointless. I can’t remember anyone’s name and Franco sleepwalks through his role (his interview in

Playboy magazine suggests that he feels that Apes is disappointing). And I don’t even know why they bothered with Brian Cox as the warden of the ape pound. He seemed to exist only to deliver one line, “They’re not human, you know,” which could have come from any other character really. The writing for the people parts was incredibly lazy, bordering on offensive. Tom Felton was only good for a cruel caricature of Draco Malfoy and the obnoxious neighbor was so over the top annoying he came off as comic. A lot of moments that were supposed to be serious played as comedic when they clearly weren’t meant to be. Problem.

Second problem—redundancy. There’s a lot of it. Chief example: Coba the ape. Coba is the second test subject Will tries his 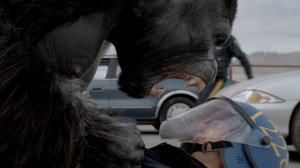 Alzheimer’s cure on and he’s a scary ape. Coba is scarred, blind in one eye, and has a mean face. We’re to understand he’s suffered a great deal of animal testing, which is truly sad, but he is POINTLESS. We already know, by the time Coba is introduced in act three, that animal testing is bad. We already know what Will’s cure can do for apes. We already know Caesar wants revenge for what was done to him (and the other apes)—do we need yet another angry ape? No, we don’t. I saw Apes with an out-of-town friend and his group of coworkers who were in Chicago for the weekend. Leaving the theater, one of his buddies said, “Now there’s a movie where everything meant something.” And I ruined any potential friendship with this person by saying, “Really, because that was a lot of pointless shit. Explain what Coba meant? What did Coba mean that Caesar didn’t already cover?” He had no answer for this because Coba meant nothing. He was just a cool looking effect who delivered on another cool looking effect.

This is the principal problem in Apes. The story has big ideas but is underwritten, the acting is pedestrian at best, and though the CGI apes are very well actualized, they still look cartoony at times. There are still sight line problems. They still have that problem of looking airy-fairy in their environments, like they’re not quite touching things (the Italians called this mannerism during the Renaissance). The desire to implement CGI and mocap technology in these ways is still outpacing mocap and CGI capabilities. As for the eyes, they’re still soulless pits of despair. It’s like staring into the uncanny valley every time the camera focuses on an ape’s eyes. It’s the stuff of nightmares. Caesar’s eyes are the weakness of Serkis’ performance, which is a shame. No, Rise of the Planet of the Apes is not awful. It’s not nearly as bad as Avatar. It’s just, you know.

SPECIAL EFFECTS ARE NOT A MOVIE.