I started reading Bill Simmons in 2001, in the freshman dorms at USC, poring over articles with my friends, marveling that someone had taken his love of sports and entertainment and was making a go of it. In a lot of ways, Simmons—aka “the Sports Guy”—is my hero. I followed him for years on ESPN and he’s recently launched Grantland.com, which has rapidly become a Grade A Time Waster for me, like videos of cute kittens and Cracked.com. I have five dreams in life, one of which is to get an “atta girl” from Bill Simmons.

So it kind of crushes me when I disagree with him, but I’m not 100% on board with his take on the state of the Movie Star. Which is to say, I actually think he’s being really, really, REALLY generous. Simmons lists twenty-four male movie stars (women aren’t included in this article at all, but I’ll give him the benefit of the doubt and go with—he’s writing about Will Smith and Ryan Reynolds so he’s sticking to their male counterparts), which are: Will Smith, Leonardo DiCaprio, Johnny Depp, Tom Cruise, George Clooney, Matt Damon, Brad Pitt, Robert Downey, Jr., Christian Bale, Tom Hanks, Denzel Washington, Ben Stiller, Adam Sandler, Russell Crowe, Jeff Bridges, Steve Carell, Seth Rogen, Will Ferrell, Zach Galifianakis, Mark Wahlberg, Ben Affleck, Jake Gyllenhaal, Justin Timberlake and Kevin James.

Here’s my problem with his list: Of Jake G, Simmons says, “It kills me to put him on here, but there’s just no way to avoid

it”. Yes, Bill, there is a way to avoid it. There are two ways to avoid it: 1) The Prince of Persia and 2) Source Code. Now I liked Source Code and I would rather deal with Jake G than most of his peers, but no matter how hard Jake tries (and he’s tried really hard), America isn’t buying him as a Movie Star. Jake can’t open a movie but he is really famous, which seems to be the primary basis of Simmons’ argument. And this is where he goes wrong.

Being a Movie Star isn’t just being really famous. You have to open BIG and you have to SELL ANYTHING. You have to sell not just movies but magazines, television appearances, and whatever crap merchandising is tied into your movies. And most importantly, you have to be able to sell ANY KIND OF MOVIE, not just your “wheelhouse”. People are buying YOU, not just your movies. By that rubric, the only (male) Movie Stars are Johnny Depp, Leonardo DiCaprio, Brad Pitt and George Clooney. That’s four. Four, not twenty-four.

There are some Past Movie Stars on Simmons’ list, though, which is I think a secondary problem for his argument. He’s treating the Movie Star as static, but it isn’t. The list changes. Washington, 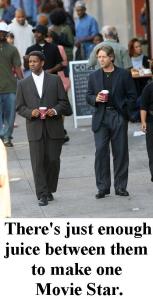 Hanks, Crowe and Cruise are Once And Future Movie Stars. They were once Movie Stars, and they could be again, depending on how upcoming projects go. Hanks just took a hit to his Movie Star-ness with Larry Crowne’s disappointing opening. Crowe bombed out with The Next Three Days, and he hasn’t had a legitimate hit since 2007’s American Gangster, which co-starred Washington. He’s another one who has been on a bit of a slide lately. Washington still sells and everyone likes him, but his box office earnings aren’t justifying his budget allotments. But at any moment he could reclaim Movie Star-ness with just one big project.
Cruise is banking his return on Mission: Impossible – Ghost Protocol, A Lot of Punctuation but like Washington, his star has lost its shine as his earnings aren’t matching up with his expenditures. And unlike Washington, who remains hugely well-liked, Cruise’s personal reputation has been beaten, stabbed and left for dead in a back alley. He still has a lot of work to do, repairing all the damage the couch-jumping did. But this group, the Once And Future group, generally have enough goodwill with the public that they could slide back into a top spot easily.

Going back to Simmons’ list, Rogen, Galifianakis and Timberlake shouldn’t be on it at all, in any

capacity. They are not Movie Stars. They aren’t even “maybe kinda sorta if you squint in the right light” Movie Stars. Galifianakis and Timberlake have never carried a major film and Rogen can’t carry anything not Apatow-related. Timberlake is up for judging this summer with Friends with Benefits, which is his first major leading role. He’s certainly trying to be a Movie Star but right now he’s just Very Famous. Then there’s the Second Tier Movie Stars, which would be guys like Smith, Damon, Affleck and Wahlberg. Will Smith used to be a Movie Star but he hasn’t made a movie since 2008 and it will be 2012 before he gets anything into theaters (and Men in Black III will be a disaster). In the time he’s taken off, DiCaprio has risen to the top flight.

Where I do completely agree with Simmons is in his assessment of Smith’s career. Smith could have been so much more, but he elected to go for fame and money over artistic credibility and so, though he has achieved a great deal of success, he will always be Less Than he could have been. Smith could very well re-emerge in 2012 as a Movie Star because people are dumb and they’ll probably go see MIBIII in droves, but then, audiences are also fickle and Smith has been away for a long time. It will be interesting to see how he fares next year, but right now I wouldn’t call him a Movie Star. I’d call him A Guy That Can Sell A Movie But Might Not Actually Make You That Much Money And People Are Over Hearing About How Great His Sex Life Is.

The next category is Really Good Actors But You Don’t Care About Their Lives. This is Downey, Bale, Bridges and Carell. They have the talent and the face/name

recognition to be a Movie Star, they can all open a movie, but they don’t have the Extra that makes a true Movie Star. This is where Simmons, like most people, trips up on his definition of a Movie Star. Think of the Movie Stars of the Golden Age of Cinema—Burton/Taylor, Nicholson, Brando, Newman—these people had LIVES. They were larger than life, jet-setters, fascinating tabloid personas that the public consumed as much for their private escapades as for their movies. But as much as I like Downey, as willing as I am to see anything Bale is in, I don’t care about them as people. I mean, I hope they’re happy or whatever, but I don’t care about the details of their lives. Steve Carell is not an interesting person. I don’t need to know what he eats for breakfast. On the other hand, I love imagining what Pitt’s sex dungeon looks like. Because I totally believe he and Angelina have one. See the difference?

The final breakaway category from Simmons’ list uses a term he throws around a lot—the Wheelhouse Guys. These are the actors who make the

same movie repeatedly and we the dumbass public keep going to see it, guaranteeing that it gets made over and over again. The Wheelhouse Guys are Stiller, Sandler, Ferrell and James. These guys are wildly successful but only if they keep making the same movie. Stiller, Sandler and Ferrell have each proved that no one cares about their movies unless they’re making us laugh, which is probably why James has yet to make any movie other than Paul Blart (next up, Paul Blart: Animal Cop). A real Movie Star, though, can make anything and people will see it. DiCaprio is going to play a cross-dressing, man-kissing J. Edgar Hoover next and you know what? We’ll all see it. That movie will make a truckload of cash and he’ll probably get another Oscar nod to boot. If Kevin James tried that? There better be some prat falls involved.

As for Ryan Reynolds, the co-target of Simmons’ piece, I agree on his assessment of Reynolds as well. Reynolds, along with Jake G and Bradley “Cries After Sex” Cooper, is being shoved down our throats as a Movie Star despite the fact that the public isn’t into it. Which is not an indictment against Reynolds as an actor or a person, he just isn’t a Movie Star. And frankly, he probably never will be. When I think of Future Movie Stars I think of guys like Daniel Craig and Ryan Gosling, both of whom have multiple projects in the next year that could launch them into the stratosphere. But Craig and Gosling both keep their private lives (relatively) private, and besides his hasty marriage to Rachel Weisz, Craig isn’t actually that interesting. So they’re most likely going to be Really Good Actors But We Don’t Care About Their Lives. You know who, right now, is best poised to make the leap to Movie Star? He’s already the best “value” in town. Yep. You guessed it. Shia LaBeouf.