I heard it often. Always from men. Always said like it was some kind of big compliment.

I got this question more than any other, usually from women, often asked in a nervous tone.

“Is there really a difference between men and women’s sense of humor?”

My answer was always the same, delivered without hesitation and with complete confidence.

There is no difference. I’ve seen a female comic crack up a male-dominated room (I’ve done it myself). I’ve seen men do 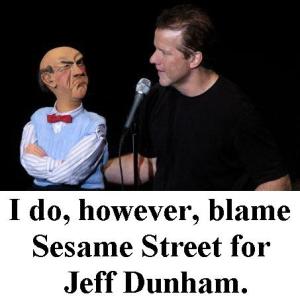 the same among a female majority. Haven’t you ever laughed at a stoner joke even if you’re not a stoner? Humor is humor is humor. The divisions people create are to do with the people and not the comedy. If your punchline is good enough, anyone can tell a black joke, or a white joke, or a guy joke, or a chick joke. Good jokes are good jokes, no matter who is delivering them. What is real is the perception that women aren’t as funny as men. I think this is because, as Tina Fey pointed out in Bossypants, there are differences between men and women that lead to misunderstandings. Guys don’t get periods so they don’t always get period jokes. They see one bad female comic and condemn the entire species. Do we blame all male comics for Dane Cook? Or all Latino comics for Carlos Mencia? Or all rednecks for Jeff Foxworthy?

That said, my best bit was about the night my roommate had to be taken to the ER because she double-downed on her tampons then had sex and ended up a bloody mess. Pun fully intended. It was gross, it was graphic, it was blue as hell—it was hysterical. Anyone can relate to terrible roommate stories, the fact that this particular one involved tampons is beside the point. Guys actually found it funnier than women. The peek behind closed doors fascinated male audiences, I found. They loved to hear what women got up to once they left room. And women liked knowing they weren’t the only ones with an embarrassing story or two. Everyone wins. 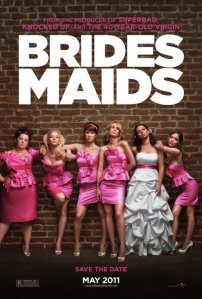 Nowhere is this lack of difference better illustrated than with The Hangover Part II and Bridesmaids. Both are R-rated comedies. Both have been successful. The Hangover 2 just obliterated box office records while Bridesmaids is trucking toward a $100 million gross. Both featured gross-out jokes, sex jokes, and increasingly ludicrous situational humor. Yet Bridesmaids was funnier. Why? Because women are funnier? No, because the jokes were better.

If Bridesmaids had been called Groomsmen and featured all the same jokes and gags, it would still be funnier than The Hangover 2. I found The Hangover 2 severely lacking in good jokes. The only stuff that made me laugh was the Ed Helms stuff (note to self: Netflix Cedar Rapids), which was mostly due to his total commitment to the comedy, not that his material was actually better than anyone else’s. And I was straight-up disappointed in Zach Galifianakis, who is one of the best working comics around today but who was disengaged from the movie this time around. For all his slovenly ways, Galifianakis is an extremely sharp comic—he would know The Hangover 2 was less than and it seems like that was enough for him to treat the movie like a paid vacation to Thailand. 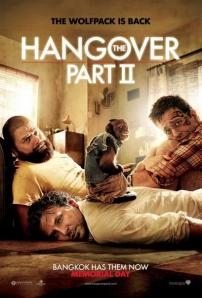 Bridesmaids, meanwhile, was hysterical. Want to see a good comedy? Don’t let the pink dresses put you off. This one is funny. As a film it’s a bit uneven and the try hard n 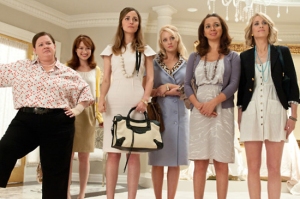 ature is quite obvious (“no seriously, women are funny, too!” it practically screams), but as a comedy it functions beautifully. Remember, good comedies aren’t always the best movies. And I don’t think Bridesmaids has much of an advantage over The Hangover 2 because Bridesmaids is original. Because really, it isn’t. If you’ve seen The Hangover, or Airplane!, there are a lot of familiar beats. Bridesmaids doesn’t chart any new territory. It just has really, really good jokes.

I went into these two movies as objectively as possible, tried my damndest to leave any personal preferences out of it while I watched them so that I could come to as unbiased an opinion as possible. And I think that Bridesmaids is funnier than The Hangover 2. It’s not a male/female thing. It’s a good joke/bad joke thing. Give it a shot and tell me I’m wrong.

7 thoughts on “The Boys & Girls Club of Comedy”