Standard issue alphabetized list, since I can barely just choose ten films, let alone then decide which is the best of the lot.

Yes, I kept my eyes open; no, I don’t want your stupid tee shirt. Cheesy “I kept my eyes open” tee shirt aside, 127 Hours is one of the true gems of 2010. Back in 2007 Daniel Day-Lewis gave a performance in There Will Be Blood that will define him forever. That’s the level of work James Franco achieved in 127 Hours. Director Danny Boyle followed up his surprise 2009 hit Slumdog Millionaire with the story of Aron Ralston, a mountaineer who became trapped in a Moab, Utah canyon and had to sever his own arm in order to survive. It’s animal, torturous, emotionally draining and spectacular. A standout of 2010, I’m not sure how well 127 Hours ages (I think Boyle’s early intercutting scenes may end up looking corny in a few years), but this performance will always define Franco.

Another career-defining performance was delivered in 2010, this one from Natalie Portman as an unhinged ballerina,

driven mad by her physical and mental dedication to her art. Darren Aronofsky (Requiem for a Dream, The Wrestler) puts together his best effort to date with Black Swan, holding a clinic on how to build suspense and engender terror without resorting to schlocky tricks and gimmicks. The ballet scene in which Portman’s Nina dances the “Black Swan” suite from Swan Lake is an eye-popping sequence of SFX—the work here is so much more subtle than your typical FX extravaganza yet Black Swan uses CGI in such a way that is wholly organic and necessary. This is the kind of work that should be winning technical awards, not the whizz-bang FX features that lack plot (ahem, Avatar). Like the ballet it incorporates, Black Swan is a fine piece of visual art.

Um, duh. Any time you face the expectations of a fanbase that s

pans generations and continents, if you can manage to not only wow them but surprise them, you win. Deathly Hallows part 1 met and exceeded every expectation, trumping the previous six entries of a franchise that has done nothing but get better over time. The “Holy Trinity” of Daniel Radcliffe, Emma Watson and Rupert Grint have come into their own as actors, ably holding their own against some of the finest actors working in Britain today. I actually chose this for a top spot based on two scenes: the dance between Harry and Hermione and the wonderful animated sequence that depicted “The Tales of Beedle the Bard”, the wizarding-world children’s story that holds the key to defeating Voldemort. The excellent addition of Rhys Ifans as Xenophilius Lovegood and some of the best one-liners in the Potterverse put Deathly Hallows part 1 over the top.

I Am Love (Io Sono L’amore)

2010 really was “the year of the actor”. Adding to the pile of superb performances is Tilda Swinton (Michael Clayton, for which she won an 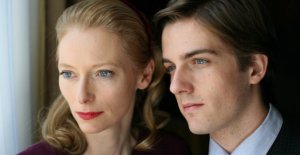 Oscar that is screwing her out of winning for this, more deserving, performance), an English actress who performs her role IN ITALIAN WITH A RUSSIAN ACCENT. Let that sink in. And she does it like a faultless speaker of Italian—you never see her struggling over pronunciation or syntax. Director Luca Guadagnino worked with Swinton before on The Protagonists, and now he has handed her one of the best parts of her career as “Emma Recchi”, the Russian matriarch of a wealthy and powerful Italian family who has an affair with her son’s friend. Gorgeous cinematography and the kind of melodramatic love triangle that only an Italian could sell as anything other than pure soapy cheese define I Am Love as one of the foreign gems of the year.

Scott Pilgrim vs. the World

Edgar Wright’s (Shaun of the Dead, Hot Fuzz) attempt at mainstream American filmmaking did not achieve the desired

results financially, but Wright did succeed in making one of the freshest, most visually engaging films of the year. Adapted from Bryan Lee O’Malley’s graphic novels, Scott Pilgrim relies on hipster lingo (seriously, this movie is the one thing I don’t hate about hipsters) and video game visual cues to tell the story of Scott, a broken-hearted guy who must defeat the seven evil exes of the lady he loves, Ramona. Featuring one of the best ensembles of the year (including Kieran Culkin, recent Oscar nominee Anna Kendrick, Jason Schwartzman, Chris Evans and Mary Elizabeth Winstead) and lead by Michael Cera, Wright managed to balance his large and talented cast, giving everyone the spotlight in just the right moment to make each character feel full and real. And his visuals really can’t be beat—Wright stages some of the whackiest, sharpest fight scenes in cinema.

I couldn’t choose! I mean, Toy Story 3 is another “duh” moment, easily one of the best—if not THE best-movie of the year, but… Don’t you kind of expect this from Pixar by now? Not only is this level of excellence what we’ve pretty much come to expect from Pixar, but there really is a very clear and not-at-all-hidden formula to Pixar movies from which

Toy Story 3 does not deviate. So for all its stellarness—which is pretty fucking stellar—Toy Story 3 didn’t really surprise me. I expected it to be that good. Tangled, on the other hand, total surprise. I got an early look at Tangled and went around telling people for ages that it was really good and everyone would be surprised and no one would believe me, but six weeks after its release and over $160 million later, clearly Disney finally figured out how to make a cartoon worth watching in the wake of Pixar. And just in time to retire—Disney announced that Tangled will be their last fairy tale for the foreseeable future. At least the princesses went out with  a bang instead of a whimper. 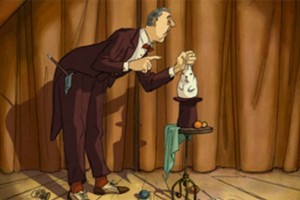 2010 was a really good year for animation. The Illusionist is from French writer/director/animator Sylvain Chomet (The Triplets of Belleville), of whom I am an enormous fan. Using very little dialogue and some of the most gorgeous animation you’ll ever see, Chomet adapts a screenplay by legendary French filmmaker Jacques Tati about an aging illusionist who travels to Scotland and has an adventure. Music plays a central role here as it did in Triplets, often filling in spots of “dialogue” when actual voices don’t. A lot of people think “French, animated, no dialogue” means “arty, pretentious and unwatchable”, but you’d be surprised how well Chomet films play to kids. The Illusionist is more accessible than Triplets, having a clearer, more easily discernible story and a hang-dog hero you can root for in the pathetic magician. This is one of the sweetest, saddest films of 2010.

The King’s Speech is yay. So much yay. Yay for days. Back in 1925 HRH The Duke of York, known to his family as “Bertie”, gave a disastrous speech at Wembley Stadium. Poor Bertie had a terrible stammer that made public speaking very difficult, yet he had to speak publicly as he was a prince of Britain’s royal family. His 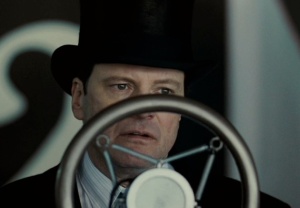 wife, Elizabeth, set Bertie up with a speech therapist, Australian actor-wannabe Lionel Logue, even though Bertie declared he would not see any more doctors. What transpires is one of the unlikeliest friendships in history between a king (Bertie became George VI when his brother abdicated to marry his divorced lover, Wallis Simpson) and a commoner, one who turns out isn’t even a licensed practitioner. Acted by Colin Firth as Bertie, Geoffrey Rush as Lionel and Helena Bonham Carter as Elizabeth (who is wonderfully snobby as the Queen Mum and delivers a chilling set-down to Wallis, Eve Best of Nurse Jackie, in one scene), The King’s Speech is a richly detailed look at how this friendship grew between unlikely men in an age when royal splendor was declining in the face of depression and the threat of Hitler. Guy Pearce pops in as the selfish and loutish Edward VIII, the abdicator who, when his country needs him most to lead them into the uncertainty of war, chooses instead to run off with his inappropriate mistress. In Firth’s hands Bertie is not as sexy or debonair as Edward, but he gives Bertie the stalwartness and loyalty that made George VI a popular and beloved leader during wartime. Stand out scene: when Bertie confronts Edward, now king, as to “who will sort out Hitler” and Edward stares back, at a total loss.

In yet another defining performance, Jesse Eisenberg makes his third appearance in two years in my top 10 (last year

he doubled-down with Adventureland and Zombieland). The Social Network unites neurotic actor Eisenberg with neurotic director David Fincher (Fight Club, Zodiac) and the result is this excellent performance as Mark Zuckerberg, the founder of Facebook. Written by Aaron Sorkin (The West Wing), The Social Network can’t be taken as fact but it is an uncanny look at how money and the lure of more money can divide and ruin friendships, even as the technology these friends invented unites people. The movie is told in flashback as “Zuck” recounts the founding of Facebook during his Harvard undergrad days in two separate depositions—one being held by the Winklevoss twins (both played by Armie Hammer, not Hammer and Josh Pence, as I originally thought), the other by Zuck’s former best friend Eduardo Saverin (Andrew Garfield, Kid A and the upcoming Spider-Man). The way Eisenberg hisses “Winkelvi” made my life and while I don’t think The Social Network “defines our age”—we’re too close to our age to define it yet—it is a stand out piece of work from Fincher, Sorkin and Eisenberg.

Two words: Hailee Steinfeld. In her first feature film, fourteen-year-old Steinfeld not only holds her own against the likes of Jeff Bridges, Matt Damon, Josh Brolin and Berry Pepper, she owns all their asses as no-nonsense farmer’s daughter “Mattie Ross”. Bridges is at his grizzled best as US Marshal “Rooster Cogburn” and Damon is surprisingly comic as Texas Ranger “ 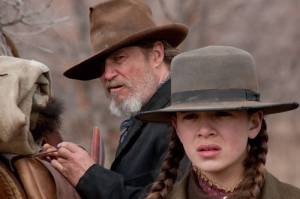 LaBeouf”. Mattie develops a deep father/daughter relationship with Rooster but her relationship with LaBeouf is more complex. Perhaps LaBeouf sees in Mattie the family—daughter and wife—he never had or Mattie sees him as the only type of man she could be satisfied with, but there’s a weirdly romantic vibe between them. It isn’t gross, especially since the two go their separate ways in the end and never see each other again, but Mattie is still thinking of LaBeouf twenty-five years later and she never married, so you are left wondering exactly what sort of impression he did leave on her. The writing is nearly as good as the Coen Brothers usually deliver, though I did find some of the jokes fell flat, perhaps hindered by the formal nineteenth-century diction the actors used. The Coens have produced two perfect films to date, O Brother Where Art Thou? and No Country for Old Men, and while True Grit is not as cohesive an effort as those films, it is every bit as satisfying to watch, driven by the fine acting and beautiful, harsh shots of a frozen Western frontier.

Cyrus, How to Train Your Dragon, Inception, Kick-Ass, The Runaways

Movies That Everyone Else Loved That I Did Not

Another Year, Exit Through the Gift Shop, Rabbit Hole, The Fighter, The Ghost Writer