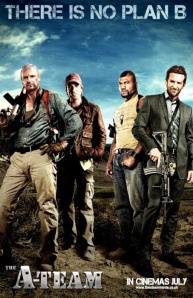 So The A-Team was pretty much like Prince of Persia: not a great movie but entertaining. I laughed for two hours and everything blew up. Also like Prince of Persia, The A-Team had criminally bad marketing. Based on the advertising, I suspected The A-Team would be a shitty and ridiculous action movie that I would love anyway because it’s just so preposterous, which it was, but who knew it was that funny? Who knew, going off the ads, that The A-Team was a comedy? A real comedy, like they set up jokes and punchlines on purpose, not just achieving unintentional comedy through the badness of their movie? The A-Team was a bromance comedy (bromcom?) with guns and dynamites. Why didn’t they sell it that way?

I left the theater with two principal thoughts after seeing The A-Team. The first was that 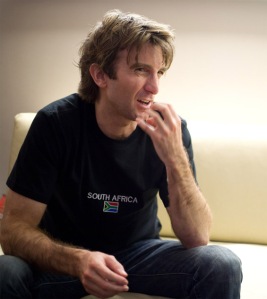 Liam Neeson is a sexy beast. That’s a given. Also, I understand better why he accepted the role of Colonel Hannibal Smith. The A-Team looked like everyone had a blast making it, so I will give Neeson the benefit of the doubt and not assume he was blackmailed into starring in it, but instead saw an opportunity to hang out and have fun for five months. I will go along with that. The second thought was, Bradley who? Because Sharlto Copley stole the show.

There’s a very real chance you don’t know who Sharlto Copley is. He has only been in one other major movie, 2009’s District 9, though he has had short films screened at the Cannes Film Festival in the past. Copley is a

South African actor—he can’t quite kill his accent in The A-Team—and he’s only been working in film since 2005, though he is apparently very involved in South African theater and television or some such. The point is, his first major film role was an international hit and he was the best part (yes, better than Coop’s pecs) of box office disappointment The A-Team. The surprising element in The A-Team was that comic aspect which saved it from being complete trash, and 95% of the comedy was generated by Copley’s batshit insane helicopter pilot, Murdoch. I don’t want an A-Team sequel; I want Murdoch to get his own movie so we can have two hours of Copley being crazy and hilarious. 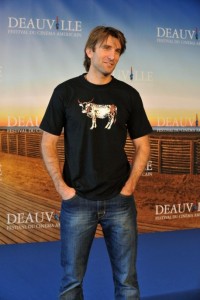 Therein lays the lure of Copley. His performance in District 9 was dramatic, tense, and one of the best of 2009. I was annoyed not to see him on red carpets come award season. But in The A-Team he displays real comic ability. He can be serious, he can be funny, and he can handle the action stuff. Sharlto Copley can do anything. He completely charmed me in The A-Team, and rocking the longer hair landed him on my Freebie Five, and left me wanting more from Sharlto. Check out the Funny or Die video below—Copley as his District 9 character, Wikus, attempts to find fellow South African Charlize Theron so she can present some random music award with him. Funny stuff. Currently, Copley doesn’t have any upcoming projects listed. Please, someone fix this.

6 thoughts on “Bradley who? It’s all about Sharlto.”